120,000-Year-Old Human Footprints Have Been Discovered in Saudi Arabia

Around 120,000 years ago in what is now northern Saudi Arabia, a small band of Homo sapiens stopped to drink and forage at a shallow lake that was also frequented by camels, buffalo, and elephants bigger than any species seen today

The people may have hunted the large mammals but they did not stay long, using the watering hole as a waypoint on a longer journey.

This detailed scene was reconstructed by researchers in a new study published in Science Advances on Thursday, following the discovery of ancient human and animal footprints in the Nefud Desert that shed new light on the routes our ancient ancestors took as they spread out of Africa.

Today, the Arabian Peninsula is characterized by vast, arid deserts that would have been inhospitable to early people and the animals they hunted down.

But research over the last decade has shown this wasn't always the case - due to natural climate variation it experienced much greener and more humid conditions in a period known as the last interglacial.

"At certain times in the past, the deserts that dominate the interior of the peninsula transformed into expansive grasslands with permanent freshwater lakes and rivers," explained study co-author Richard Clark-Wilson of Royal Holloway.

The paper's first author Mathew Stewart, of the Max Planck Institute for Chemical Ecology, Germany, told AFP the footprints were discovered during his PhD field work in 2017 following the erosion of overlying sediments at an ancient lake dubbed 'Alathar' (meaning "the trace" in Arabic).

"Footprints are a unique form of fossil evidence in that they provide snapshots in time, typically representing a few hours or days, a resolution we tend not to get from other records," he said.

The prints were dated using a technique called optical stimulated luminescence - blasting light at quartz grains and measuring the amount of energy emitted from them. 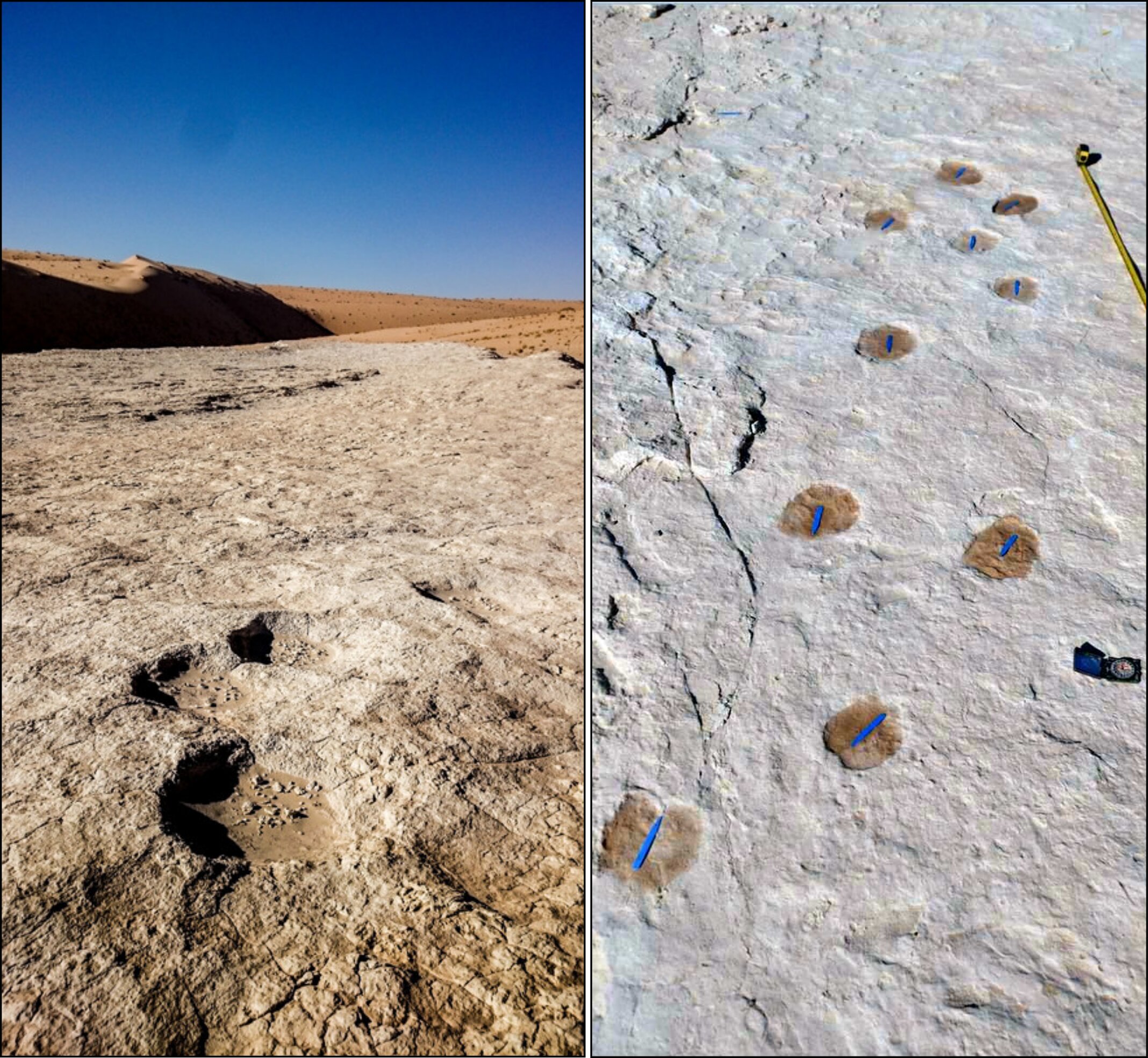 In total, seven out of the hundreds of prints discovered were confidently identified as hominin, including four that, given their similar orientation, distances from one another and differences in size, were interpreted as two or three individuals travelling together.

The researchers argue these belonged to modern humans, as opposed to Neanderthals, on the basis that our extinct cousins aren't known to have been present in the wider Middle East region at the time, and based on stature and mass estimates inferred from the prints.

"We know that humans were visiting this lake at the same time these animals were, and, unusually for the area, there's no stone tools," said Stewart, which would have indicated the humans made a longer term settlement there.

"It appears that these people were visiting the lake for water resources and just to forage at the same time as the animals," and probably to also hunt them.

The elephants, which had gone extinct in the nearby Levant region some 400,000 years ago, would have been particularly attractive prey, and their presence also suggests other plentiful freshwater resources and greenery.

In addition to the footprints, some 233 fossils were recovered, and it's likely that carnivores were attracted to the herbivores at Alathar, similar to what is seen in African savannas today.

According to the paper, fossils were first recorded for Homo sapiens outside of Africa between roughly 210 and 180 thousand years in southern Greece and the Levant.

The new paper demonstrates "inland routes, following lakes and rivers, may have been particularly important to humans dispersing out of Africa" too, said Stewart.

"The presence of large animals such as elephants and hippos, together with open grasslands and large water resources, may have made northern Arabia a particularly attractive place to humans moving between Africa and Eurasia," added the study's senior author Michael Petraglia of the Max Planck Institute for the Science of Human History.