Holograms are pretty cool, sure. But they're still just two-dimensional projections that hover in the air, and as soon as you step to the side, the magic disappears, revealing how flat the thing really is.

But now researchers from Brigham Young University have demonstrated they can create fully three-dimensional projections of moving images - and they use light and particles in the air to achieve this.

The end result is closer than ever to the miniature Princess Leia projection in Star Wars: A New Hope, and that's no accident.

"We refer to this colloquially as the Princess Leia project," said lead researcher Daniel Smalley.

"Our group has a mission to take the 3D displays of science fiction and make them real. We have created a display that can do that." It's not holograms, though. The kinds of three-dimensional images you can walk around and view from different angles - such as Tony Stark's interactive projections in Iron Man, or the 3D mapping technology in Prometheus - are called volumetric images.

Our current hologram technology may appear to be 3D, but it all happens on a 2D surface, and can't be viewed in the same way.

"This is doing something that a hologram can never do - giving you an all-round view, a Princess Leia-style display - because it's not a hologram," University of Glasgow optical physicist Miles Padgett, who was not involved in the research, told Nature.

The team has used something called optical trapping, more commonly used as a sensitive tweezer instrument in laboratory settings to manipulate nanoparticles.

This is a highly focussed laser beam containing a strong electric field gradient that can be used to manipulate microscopic particles.

Smalley's team used near-invisible lasers to trap a tiny particle of cellulose, a type of plant material, heating it unevenly to move it around in the air. Meanwhile, a second set of red, green and blue lasers illuminates it.

If the particle moves fast enough, your eye sees it as a line. In this way, the researchers were able to create 3D light animations in the air. They've called it the Optical Trap Display, and it works out of a device the size of a lunch box.

"This display is like a 3D printer for light," Smalley said. "You're actually printing an object in space with these little particles." 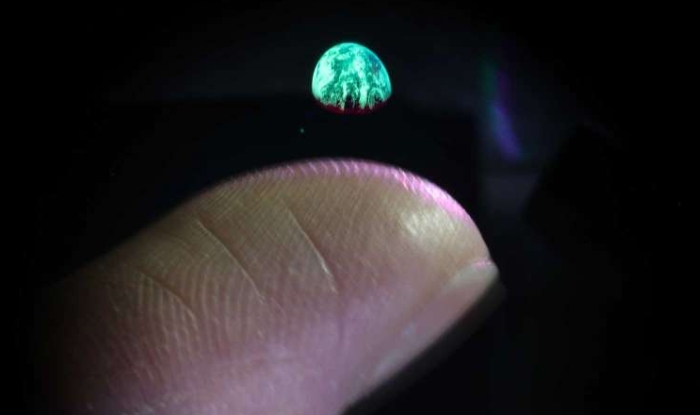 So far the technology is in its early stages, and can only be used to create very small, simple drawings, or larger ones that are a lot slower.

The team has used it to draw a prism, a butterfly, the university's logo, rings that wrap around an arm like bracelets, an image of the Earth, and one of the students, wearing a lab coat, posed like Princess Leia.

That last one, the most complex, took 40 seconds to draw in the air, and had to be photographed using a long exposure.

There are other limitations, too. For instance, winds could interfere with the lasers' grip on the particle, which would make it unsuitable for outdoors. Complex images using multiple particles may be difficult too, since the strength of the optical trap can vary, and a particle in a weak trap may jump to a stronger one.

However, the concept has been proven, and the team is working on improving it.

"The reported prototypes use commercial hardware and have low cost relative to other free-space volumetric displays," they wrote in their paper.

"We anticipate that the device can readily be scaled using parallelism and consider this platform to be a viable method for creating 3D images that share the same space as the user, as physical objects would."