A Florida man was killed on Friday by what ornithologists say is the "world's most dangerous bird". It was a cassowary - an enormous, flightless bird around which even experienced zookeepers take precautions.

He raised the animal on his farm, along with other exotic birds, authorities said.

Police identified the man as 75-year-old Marvin Hajos. Emergency medical services responded to a call at approximately 10 am Friday at his farm near Alachua, Florida, according to Lt. Josh Crews of the Alachua County Sheriff's Office.

The bird had attacked Hajos, injuring him severely. He was transported to the hospital where he later died.

Authorities are still investigating the exact circumstances that lead to his death.

A woman who identified herself as Hajos's fiance told the Gainesville Sun "he was doing what he loved".

The bird has subsequently been secured, authorities said. The sheriff's office said they may coordinate with the Florida Fish and Wildlife Commission as the investigation moves forward.

The FWC identifies cassowaries as "Class II Wildlife", which can "pose a danger to people". The commission requires a permit for the sale, public exhibition or possession of these animals.

Cassowaries, of which there are three species, are native to the tropics of Queensland, Australia, and New Guinea. Like photos would suggest, they are a relative of ostriches, emus and rheas. 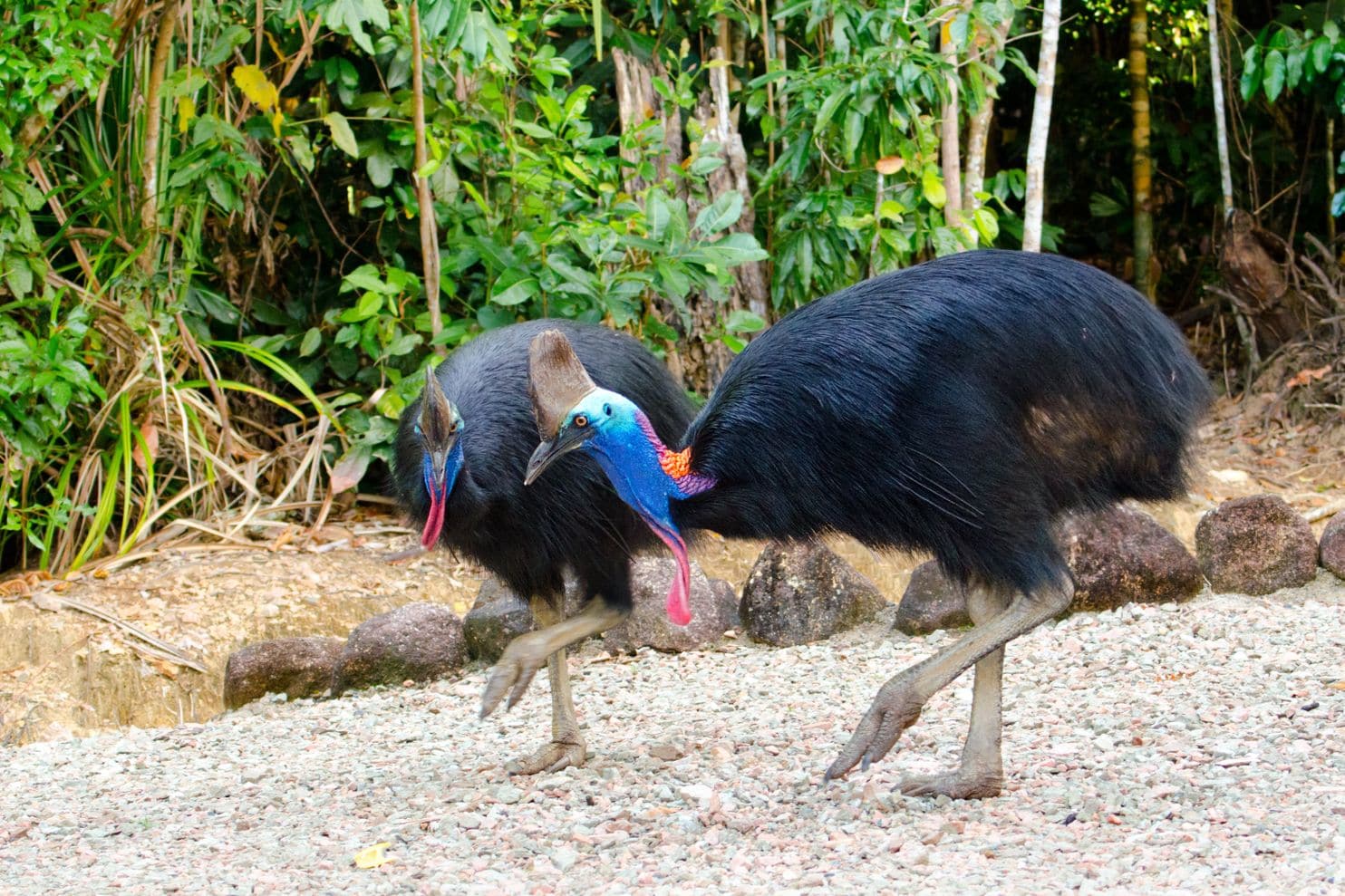 A pair of endangered southern cassowaries in Queensland, Australia. (BirdImages/iStock)

Cassowaries look like a high-fashion dinosaur; thick black feathers cover their bodies, from which a cobalt blue and vibrant red neck erupts, leading to a head adorned with a keratin "casque" or crest.

What makes them dangerous, however, are their feet. Three toes sport pointed nails. The most dangerous of which is the middle, which ends in a veritable dagger several inches long.

"If you were kicked by a cassowary with that nail, it would do a lot of damage to you," said Eric Slovak, assistant curator of birds at the National Zoo in Washington.

"You would wind up in the hospital for sure."

But cassowaries, while dangerous, tend to be reclusive, Slovak said. In the wild, they hide deep in the rain forests, but will occasionally encounter humans when they come across a road or neighborhood.

"It's just kind of a big, 200 pound [90 kg], six-foot [1.8 metre] bird roaming around eating fruit all day," Slovak said, noting their deadly nail was likely developed to help them move through the dense forests.

That doesn't mean they're benign. The National Zoo's cassowaries are on loan while their enclosures are remodeled. Slovak said they took serious precautions when the birds lived at the zoo.

Their enclosures were built with doors and gates to separate them from humans who needed to enter.

"At no time, ever, do we ever go in with the cassowary," he said. "Not because they're mean, but because we know how dangerous they could be if they got spooked for any reason."

"I would not understand why anyone would want to keep a cassowary as a pet," Slovak added.

There have been a handful of frightful encounters with the birds, mostly in their native Australia, though the last known death happened in 1926, according to Smithsonian Magazine.

In a 1999 study, Christopher P. Kofron of the Queensland Parks and Wildlife Service tallied 221 cassowary attacks in Queensland, and 150 were on humans.

Kofron noted that the attacks tend to happen "every year" and that the birds most frequently attacked when they were expecting to be fed by a human, or when they were defending their food, offspring or themselves.

In 2012, an Australian tourist named Dennis Ward was kicked off a cliff into a body of water by a cassowary when he and his family were visiting Babinda Boulders in Queensland.

"It just came straight up to me, decided to pick on me for some reason, I don't know what for," Ward told the Cairns Post.

"Next thing, thump, I copped a boot in the back and I was tumbling down the bank," Ward said. "It was pretty high, about seven foot. I hit this ledge near the bottom and bounced off into the drink."

In another unnerving incident, Doon McColl and her boyfriend, Ray Willetts, had back-to-back run-ins with cassowaries in Australia's Mount Whitfield Conservation Park in 1995. Doon was jogging when she hard something behind her.

"I turned and saw this huge black beast," she told Outside Magazine. "And I just thought, Oh, [expletive]."

The cassowary cornered her in a tree for hours, before it finally let her be. A week later, Willetts was also pursued through the forest by one of the creatures.

"He came home crosshatched and bleeding," McColl said. He told her, "'Oh my god, Doon, it was Jurassic Park!"

Trending News
The Y Chromosome Is Slowly Vanishing. A New Sex Gene Could Be The Future of Men Humans3 days ago
An Unexpected Source Might Be Helping The Universe Glow More Than It Should Space4 days ago
Scientists Just Caught Bacteria Using a Never-Before-Seen Trick to Avoid Antibiotics Health5 days ago