Simulation of the cosmic web. (Illustris-TNG)

The Universe isn't just a random scattering of galaxies sprinkled throughout an expanding void. The closer we look, the more we see that there are structures - some of which are incomprehensibly vast groupings and clusters of galaxies that are gravitationally bound together.

Such a structure has just been discovered arcing across the southern edge of the sky, and it's a colossus, spanning an immense 1.37 billion light-years from end to end. Its discoverers have named it the South Pole Wall.

Although the size is remarkable - it's one of the largest structures in space we've ever seen - we know exactly what the South Pole Wall is. It's a galaxy filament, a huge formation of galaxies that forms a border between the empty spaces of cosmic voids that together form the cosmic web. Hence, we call it a wall.

Other, larger such walls are known. The largest is the Hercules-Corona Borealis Great Wall, which spans 9.7 billion light-years. But the South Pole Wall is special, because it's insanely close to the Milky Way galaxy, lying just 500 million light-years away. In other words, it is the most massive structure we've ever seen this close.

You're probably wondering how on Laniakea we managed to miss one of the largest galaxy filaments in the Universe right on our doorstep. And there's actually a really good answer to that question: it was hidden behind what astronomers sometimes call the Zone of Avoidance or Zone of Galactic Obscuration - the Milky Way galactic plane.

This is the disc of our home galaxy, a region thick and bright with dust and gas and stars. So thick and bright, in fact, that it obscures a large part of what's behind it, making that region of the Universe poorly explored compared to the rest.

If this Zone of Avoidance hid the South Pole Wall so effectively, how have astronomers found it now? The answer to that question is a little more complex, but basically, it hinges on how galaxies move around the sky.

A team of researchers led by cosmographer Daniel Pomarède of the Paris-Saclay University used a database called Cosmicflows-3, which contains distance calculations to nearly 18,000 galaxies. These are figured out using redshift, which measures how rapidly something is moving farther away based on how stretched out its light waves are.

Last year, a different team of researchers used this database to calculate another parameter, something known as peculiar velocity, which is the velocity of a galaxy relative to its motion due to the expansion of the Universe.

With these two parameters, the team could calculate the motions of the galaxies relative to each other - and these motions revealed the gravitational influence of a much larger mass. With the help of algorithms, the team was able to use these motions to map in three dimensions the distribution of material in the South Pole Wall, even beyond the Zone of Avoidance. 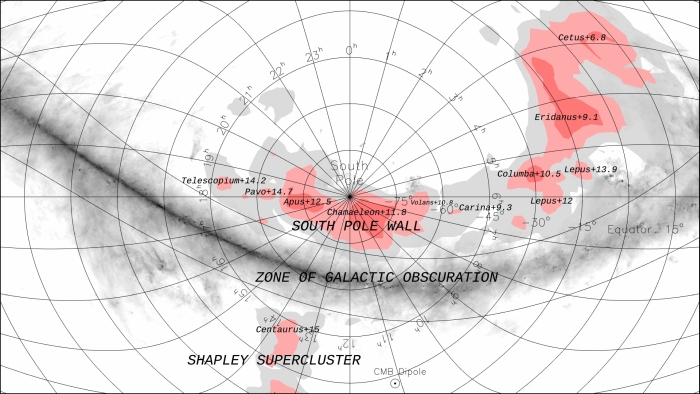 Because there are parts of the South Pole Wall we can't see, it's possible that the structure is even larger than we can tell at this point. But we can be sure that astronomers are itching to find out.

It can also help us understand the evolution of our local corner of space, which includes Laniakea, the supercluster of galaxies to which the Milky Way belongs, also discovered by Pomarède and his colleagues (led by Brent Tully of the University of Hawai'i at Manoa) back in 2014.

This is a magnificent discovery, and we can't wait to see what else it will reveal.