Between the two halves of our brains is a gap filled with fluid and spanned only by the corpus callosum: a bridge of neural fibres that ferries information to either side.

Some people, however, are born without a corpus callosum, meaning they lack the usual neural highway of approximately 190 million axons that would typically carry information between the left and right hemispheres. How their brains adapt is truly extraordinary.

Studies have shown that in individuals who never develop this major connection, the brain rewires itself and creates entirely new connective pathways that re-route signals through other brain regions, keeping communication flowing across the divide via the mid- and fore-brain.

The new fibres built to reconnect the brain's two hemispheres, called Probst bundles in some cases, aren't a perfect replacement for the corpus callosum, and yet "[r]emarkably, communication between the two hemispheres is maintained," explains neuroscientist Vanessa Siffredi from the University of Geneva in Switzerland.

Much about the process remains a mystery, but new research from Siffredi and colleagues has now revealed that the brain plasticity in children lacking a corpus callosum runs even deeper still.

Imaging results from a study of Australian children show that brains lacking a corpus callosum create a remarkable number of new connections inside each hemisphere as well, to help maintain overall brain function.

About one in every 4,000 people are born without a corpus callosum, which usually measures 10 centimetres (almost 4 inches). It first develops in the womb by around 20 weeks into gestation.

Around half of people born without a corpus callosum (called agenesis of the corpus callosum) have learning and memory difficulties. Some might also have poor attention and less cognitive flexibility than their peers.

Others can be even more severely affected, and yet a quarter of people with the diagnosis show no visible signs of any impairment whatsoever.

The researchers thought that looking at the connectivity of neural fibres within each hemisphere – aside from being another marker of the brain's malleability and brilliance – might also go some way to explaining this variability in effects.

In the study, 20 children (aged 8 to 17) who were born either without a corpus callosum or with an incomplete one had their brains scanned using an MRI machine so that the researchers could look at connections between different parts of their brain. These were compared with scans taken from 29 healthy children with an intact corpus callosum.

As well as having their brains scanned, the children also completed tasks to test their working memory, attention, and verbal learning abilities.

By analysing the structural connections in the whole-brain images from the children without a fully formed corpus callosum, the team found the brain responds by strengthening neural pathways inside each of its two hemispheres.

The children with corpus callosum agenesis showed greater connectivity within each brain hemisphere than the group of healthy children. 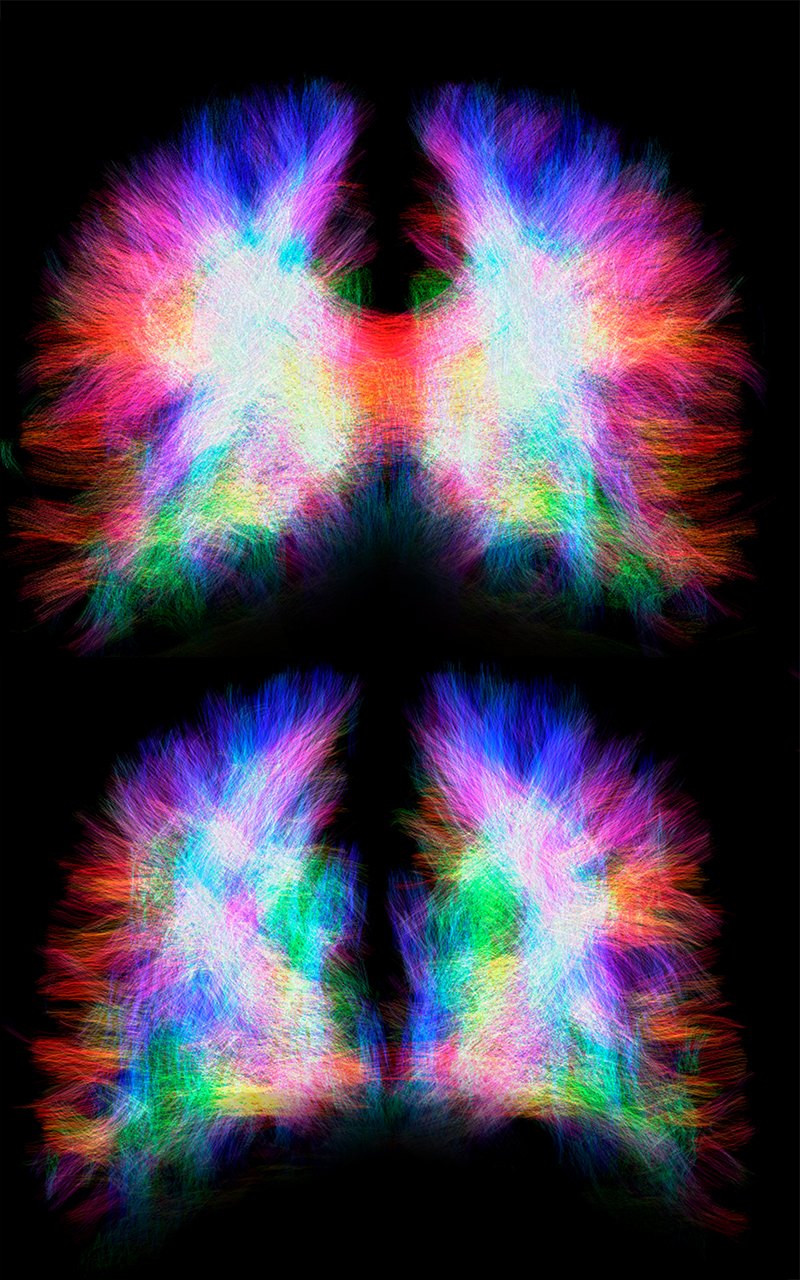 In a healthy brain (top), the two hemispheres are connected by the corpus callosum fibres, shown in red. These fibres are absent in a brain with corpus callosum agenesis (bottom). (Vanessa Siffredi/UNIGE)

Incredibly, when analysing the functional links across the brain scans (in only 16 children with corpus callosum agenesis this time), there was no significant difference between the two groups.

Even without a corpus callosum, parts of the children's brains were still actively communicating with other areas, both within hemispheres and between them. This functional connectivity was comparable to their healthy peers with a normally developed corpus callosum.

This shows, again, how brain plasticity can triumph over what appears to be, on first impressions, gaping structural deficiencies in brain development.

"We think that plasticity mechanisms, such as the strengthening of structural bonds within each hemisphere, compensated for the lack of neuronal fibres between hemispheres," says Siffredi.

"New connections are created and the signals can be re-routed so that communication is preserved between the two hemispheres."

Focusing just on the kids with corpus callosum agenesis and their test results, the researchers also discovered that greater structural connectivity within hemispheres was associated with better learning outcomes, long-term and working memory, and attention.

Although the number of children involved in this study might seem small, it is sizeable for research examining this condition. There are also few studies to date that pair brain imaging with behavioural outcomes like this research does.

It's also worth noting that some of the children studied had other brain abnormalities in addition to their missing corpus callosum, though these kids showed similar levels of plasticity to their group mates.

All in all, this remains a spectacular example of brain plasticity at work, and the new findings could help explain why some children with this extraordinary condition fare better than others.

The research was published in Cerebral Cortex.