No two planets in the Solar System are exactly alike, but we can broadly categorise them - rocky worlds Earth, Venus, Mercury and Mars; gas giants Saturn and Jupiter; ice giants Neptune and Uranus; and dwarf planets, like Pluto and Ceres.

That sounds pretty diverse, but astronomers have just made a detailed study of a fascinating type of planet we don't have - super-puff worlds.

Of all the exoplanets our efforts have uncovered to date, only a handful - less than 15 - have been puffy. These three young planets, seen orbiting a star around 2,600 light-years away, are almost the size of Jupiter, but have less than one percent of its mass.

That means they have spectacularly low density; in fact, they're the puffiest planets ever seen, with a density lower than 0.1 grams per cubic centimetre. In press statements, the texture of these planets has been likened to cotton candy.

"This is an extreme example of what's so cool about exoplanets in general," said exoplanet scientist Zachory Berta-Thompson of the University of Colorado Boulder (UC Boulder).

"They give us an opportunity to study worlds that are very different than ours, but they also place the planets in our own Solar System into a larger context."

The three planets, orbiting a star called Kepler 51, were discovered in 2012, but it wasn't until 2014 that their strangely low density was discovered. Now, using observations taken with the Hubble Space Telescope, a team of astronomers has revealed what is happening with the planets' atmospheres.

The Kepler space telescope located exoplanets using the transit method - that is, the dimming of the light of a star when a planet passes between the telescope and the star, in what is known as a transit.

The other awesome thing about transiting exoplanets is that when they dim the star's light, some of it gets filtered through the exoplanet's atmosphere (if it has one). So you can look at a spectrum of electromagnetic wavelengths from the star when the planet both is and isn't transiting.

Because certain molecules block certain wavelengths, these absorption lines on the spectrum can be read to infer the chemical composition of the atmosphere. 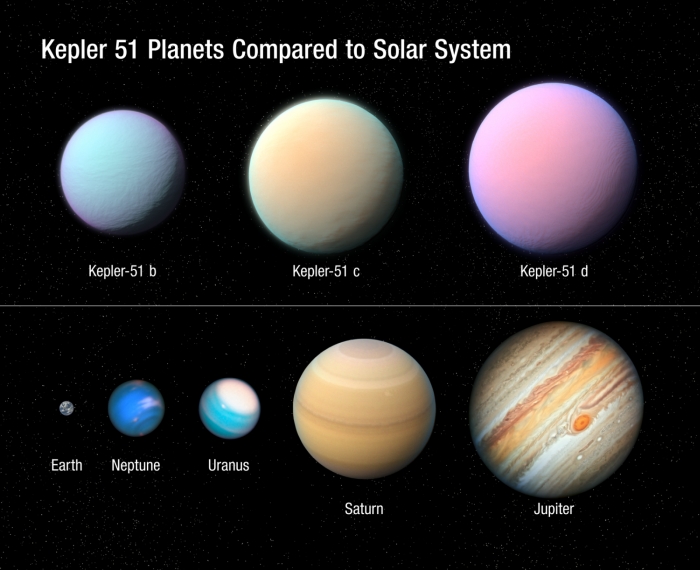 "It definitely sent us scrambling to come up with what could be going on here," said planetary scientist Jessica Libby-Roberts of UC Boulder. "We expected to find water, but we couldn't observe the signatures of any molecule."

So, they turned to computer simulations to see what sort of atmospheric conditions could produce something like the super-puffs - overall very low-density, but wrapped in an opaque shell. And the best fit turned out to be an atmosphere that was a mixture of hydrogen and helium, with a high-altitude layer of methane.

We've seen something like that methane layer before, in Saturn's moon Titan. Because of the thick methane layer surrounding Titan, we didn't get a direct image of the moon's surface until Cassini arrived in 2004.

"If you hit methane with ultraviolet light, it will form a haze," Libby-Roberts said. "It's Titan in a nutshell."

The team also discovered that these atmospheres are leaking off into space at a tremendous rate. That, they said, could explain why these super-puff planets are so rare.

Since these strange puffs are so young, the cotton-candy state could be a temporary stage in their development, and the final planet could be something much more expected - mini-Neptunes, the most common type of planet in the galaxy (and also not found in the Solar System).

"A good bit of their weirdness," Berta-Thompson said, "is coming from the fact that we're seeing them at a time in their development where we've rarely gotten the chance to observe planets."

The research will be published in The Astronomical Journal, and is available on arXiv.