Here's How Carnivorous Plants Munch on Their Prey

There are more than 600 carnivorous plants that feed on insects and spiders, and several feeding mechanisms that have evolved to help them seduce, trap, and ingest their unsuspecting prey.

Some of these methods, such as the snap-trap employed by the iconic Venus flytrap, Dionaea muscipula, require a sudden movement. The flytrap clamps down its thin, v-shaped leaves on trespassing insects, in a slightly disturbing display of bloodthirst (which makes us especially glad we don't have six legs and wings). But what causes this movement?

According to Julia Cooke, a plant ecologist from the Hawkesbury Institute for the Environment at the University of Western Sydney in Australia, it all begins with small hairs on the inside of the leaf, which forms the trap. These tiny hairs act as motion sensors.

"When an insect touches these hairs twice, it triggers closure using short-term changes in the electrical potential on the surface of cells," explains Cooke, writing in the Sydney Morning Herald.

She adds that "similar cell-to-cell communication, using different ions, is found in muscles and neurons in animals."

These triggers are important because they allow the plant to differentiate between edible insects and inanimate objects, such as twigs or stones (which probably aren't as tasty, and may or may not present a choking hazard). In truth, these false alarms only result in a partial closing of the trap, but are still a considerable detriment, because they essentially deactivate the capture-leaf for up to 12 hours and expend valuable energy.

After the trigger hairs are activated by some poor insect, thrashing around and trying to escape, the plant pumps water into the cells on the outside of the leafy trap, which causes them to quickly enlarge. This encourages elasticity, because the plant tissue relaxes, explains Cooke. Meanwhile, cells on the inside of the trap, which were formerly very compressed and held the trap open, have their water pumped out.

As a result, the leaf snaps shut. In doing so, the long hair-like projections along the edge of the leaf, resembling spiny fangs, interlock and help to form an airtight seal around the insect. This sealed cavity essentially acts like a stomach, inside which the plant secretes acidic digestive juices that help it break down its meal. And just like that, dinner is served!

All of this takes about 0.5 seconds, says Cooke. But other carnivorous plants can move even faster: "The related waterwheel plant uses snap-traps, but underwater. This plant closes its traps in 20 milliseconds, making it one of the fastest movements recorded in plants."

The waterwheel plant is part of the sundew family, and can be found in shallow waters in Australia and in tropical regions of Asia and Africa. These plants produced "sticky substances from stalked glands covering their leaves," says Cooke.

These sticky secretions can sometimes be sweet to attract insects. "When small animals become trapped in this glue, the stalks bend towards the prey, moving it to the centre of leaf that then curls around the animal to form an 'outer stomach'. 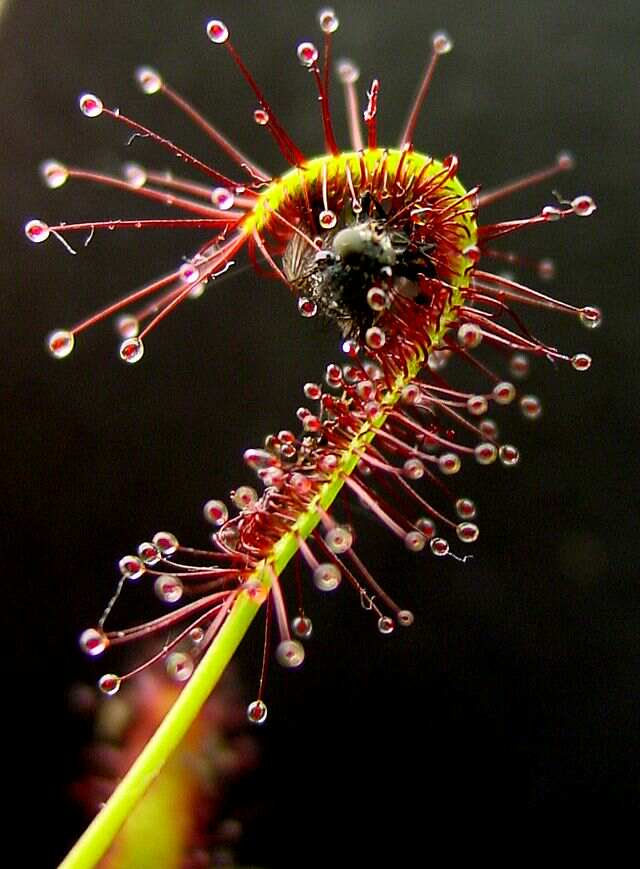 The bending Drosera capensis, a member of the Sundew family (Credit: Wikipedia)

This fast bending movement happens in much the same way as it does with the flytrap, in that movement from the prey triggers a signal for cell expansion and extension.

In contrast, members of the bladderwort genus use a type of suction trap, which is a purely mechanical movement. These plants have lots of small "balloon-like structures with an opening" that grow along their stem, which capture small insects.

"Water is pumped out, forming a vacuum and closing the trap," she explains. "When prey touches the stiff hairs around the opening, it mechanically creates an entrance to the vacuum and the animal is sucked inside." Presto, they're gone!

And in case you were wondering why they feast on insects and other small critters, carnivorous plants tend to grow in places where the soil is lacking in nutrients, so they're simply trying to make up for this deficit.

Nature is so amazing!