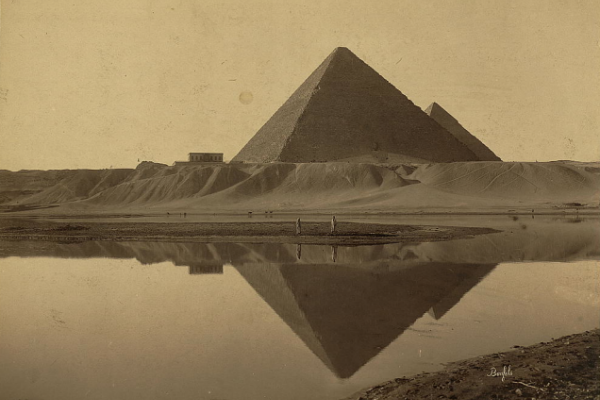 Exactly how the colossal Great Pyramid of Giza was built has been debated furiously for centuries. While Egyptologists generally agree that the 146.5-metre-high structure was built over a period of 10 to 20 years, no one has been able to prove how 2.4 million enormous limestone blocks were transported from several nearby quarries and stacked so perfectly in a pyramid shape using nothing but whatever basic construction technologies were available at the time.

One popular theory is that the blocks were dragged across strips of sand that had been loosened with water to reduce friction. But this raises the question of how the workers would have transported all the water they needed to the location of the blocks, because just like limestone blocks, water is incredibly heavy too!

Perhaps, proposes a different theory, the workers attached quarter-circle wheels to the flat surfaces of the blocks, turning them into easy-rolling cylinder shapes. But the problem with this hypothesis is that it's not particularly practical when you consider it in relation to the roads these cylinders would need to roll along. The pressure exerted by the blocks on the roads as they were rolled towards the construction would have effortlessly torn them up, necessitating constant maintenance by the otherwise engaged workers.

But a new study led by physicist Joseph West from Indiana State University in the US has offered up a pretty promising theory. The Physics arXiv Blog explains:

"Their approach considerably reduces the ground pressure but at the same time allows the blocks to be moved with significantly less effort than dragging. They have even tested the idea to measure the amount of force workers would have had to use to move the blocks. Their idea is remarkably simple. They strap wooden rods to a block, turning its profile from a square into a dodecagon, which can then be moved more easily by rolling."

West and his colleagues tried their theory out on a scale model made from a concrete block weighing almost 30 kg. After they strapped the four sets of three wooden rods to each side of the block, they attached a rope to the top, which could be used to pull on the crude wheel-like structure and get it rolling. They measured how much force would be needed to set the stone rolling, and found that it was only around 0.15 times the entire weight of the stone, which is feasible, even for the largest stones used in the Great Pyramid.

"Of course, these researchers do not address the question of whether there is any evidence that the pyramids were constructed in this way, only that this would certainly seem a good option, not least because of the reduced wear and tear on the thoroughfares to and from the pyramid,” says the Physics arXiv Blog. "Indeed, they say the mechanism would work without a formal, engineered road.”

The team is in agreement with that assessment, concluding the study by asserting the need for further research into the theory: “It would seem that some variation of rolling the blocks should now be considered to be among the 'best' and most likely method used to move the stones for the great pyramids."