Red dwarf stars are the most common kind of star in our neighbourhood, and probably in the Milky Way. Because of that, many of the Earth-like and potentially life-supporting exoplanets we've detected are in orbit around red dwarfs. The problem is that red dwarfs can exhibit intense flaring behaviour, much more energetic than our relatively placid Sun.

So what does that mean for the potential of those exoplanets to actually support life?

Most life on Earth, and likely on other worlds, relies on stellar energy to survive. The Sun has been the engine for life on Earth since the first cells reproduced. But sometimes, like all stars, the Sun acts up and emits flares.

Sometimes it emits extremely energetic flares. The powerful magnetic energy in the Sun's atmosphere becomes unstable, and an enormous amount of energy is released. If it's released towards Earth, it can cause problems. It can lead to disruptions in radio communications and even blackouts.

But in terms of flaring activity, the Sun is relatively weak compared to some other stars. Some stars, especially red dwarfs, can flare frequently and violently. A team of researchers studied how flaring activity affects the atmosphere and potential for life on Earth-like planets orbiting low-mass stars, including M-type stars, K-type stars, and G-type stars. 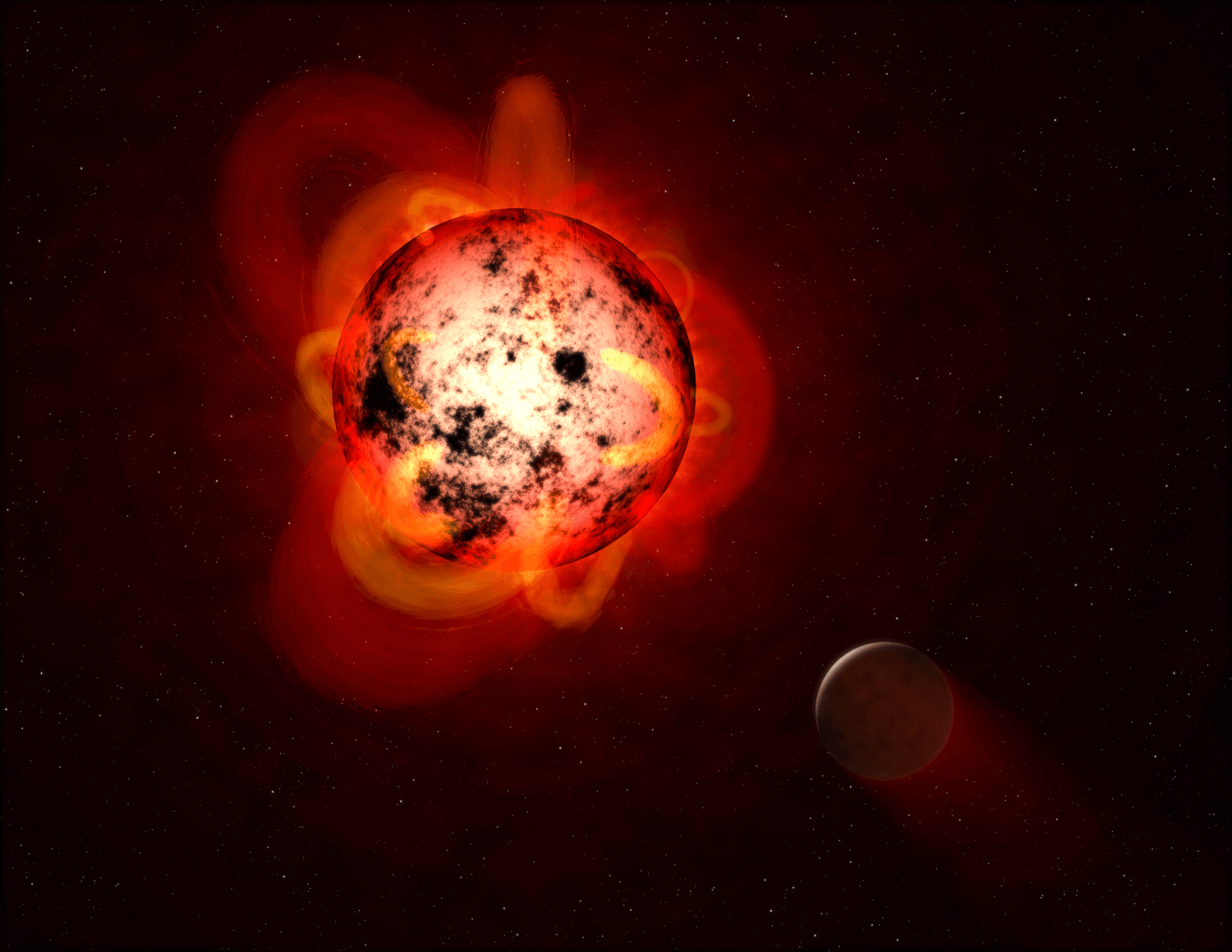 Art of a flaring red dwarf star, orbited by an exoplanet. (NASA/ESA/G. Bacon/STScI)

The new study is called "Persistence of flare-driven atmospheric chemistry on rocky habitable zone worlds". The lead author is Howard Chen, a PhD student at Northwestern University. The paper is published in the journal Nature Astronomy.

"Our Sun is more of a gentle giant," said Allison Youngblood, an astronomer at the University of Colorado at Boulder and co-author of the study.

"It's older and not as active as younger and smaller stars. Earth also has a strong magnetic field, which deflects the Sun's damaging winds."

That helps explain why Earth is positively "rippling with life" as Carl Sagan described our planet. But for planets orbiting low-mass stars like red dwarfs (M-dwarfs) the situation is much different.

We know that solar flares and associated coronal mass ejections can be very damaging to the prospects of life on unprotected exoplanets. The authors write in their introduction that "[s]tellar activity – which includes stellar flares, coronal mass ejections (CMEs) and stellar proton events (SPEs) – has a profound influence on a planet's habitability, primarily via its effect on atmospheric ozone."

A single flare here and there over time doesn't have much effect. But many red dwarfs exhibit more frequent and prolonged flaring.

One of the things the team looked at was ozone, and the effect flares have on it. Here on Earth, our ozone layer helps protects us from the Sun's UV radiation. But extreme flaring activity on red dwarfs can destroy ozone in the atmosphere of planets orbiting close to it.

When ozone levels drop, a planet is less protected from UV radiation coming from its star. Powerful UV radiation can diminish the possibility of life.

In their study, the team used models to help understand flaring and its effects on exoplanet atmospheres. They used flaring data from NASA's TESS (Transiting Exoplanet Survey Satellite) and long-term exoplanet climate data from other studies. They found some cases where ozone persisted, despite flaring.

"We've found that stellar flares might not preclude the existence of life," added Daniel Horton, the study's senior author. "In some cases, flaring doesn't erode all of the atmospheric ozone. Surface life might still have a fighting chance."

IMAGE: This figure from the study shows global-mean vertical profiles of atmospheric species on a simulated planet around a Sun-like G-type star. From left to right are the mixing ratios for ozone, nitrous oxide, nitric acid, and water vapour.

Planets that can support life, at least potentially, can be in a tough spot. They must be close enough to their stars to prevent their water from freezing, but not too close or they're too hot. But this dance with proximity can expose them to the powerful flares.

Red dwarfs are smaller and cooler than our Sun, so that means the habitable zone for any planets orbiting them is smaller and much closer to the star than Earth is to the Sun. That not only exposes them to flares but leads to planets being tidally locked to their stars.

The combination of flaring and tidal-locking can be bad for life's prospects. Earth's rotation generates its protective magnetosphere, but tidally-locked planets can't generate one and are largely unprotected from stellar UV radiation.

"We studied planets orbiting within the habitable zones of M and K dwarf stars – the most common stars in the universe," Horton said.

"Habitable zones around these stars are narrower because the stars are smaller and less powerful than stars like our Sun. On the flip side, M and K dwarf stars are thought to have more frequent flaring activity than our Sun, and their tidally locked planets are unlikely to have magnetic fields helping deflect their stellar winds." 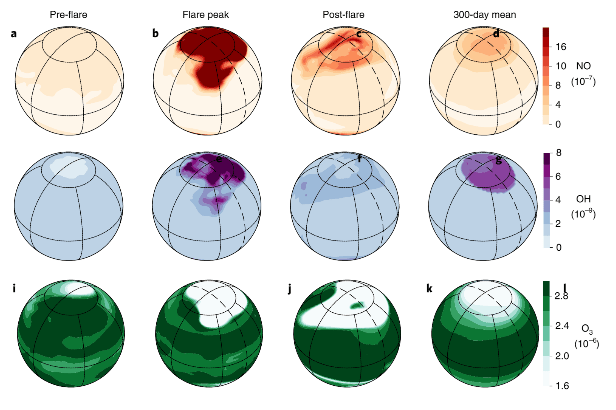 IMAGE: This figure from the study shows how repeated stellar flaring can alter the atmospheric gases in a simulated Earth-like planet around a Sun-like star.

There's a more positive side to this study as well. The team found that flaring activity can actually help the search for life.

The flares can make it easier to detect some gases which are biomarkers. In this case, they found energy from flaring can highlight the presence of gases like nitric acid, nitrous dioxide, and nitrous oxide, which can all be indicators of living processes. 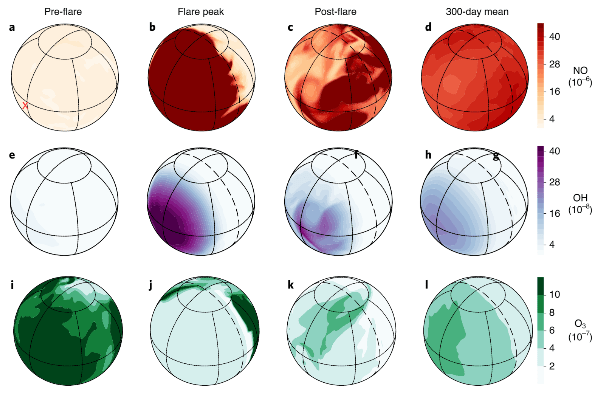 IMAGE: This figure from the study shows how repeated stellar flaring can affect the atmospheric chemistry on a modelled Earth-like planet around a K-type star. Note the raised levels of detectable NO, a potential bio-marker.

"Space weather events are typically viewed as a detriment to habitability," Chen said.

"But our study quantitatively showed that some space weather can actually help us detect signatures of important gases that might signify biological processes."

But only some. In other cases, their work showed that flaring can destroy potential biosignatures from anoxic life.

"Although we report the 3D effects of stellar flares on oxidizing atmospheres, strong flares could have other unexpected impacts on atmospheres with reducing conditions. For instance, hydrogen oxide species derived from stellar flares could destroy key anoxic biosignatures such as methane, dimethyl sulfide and carbonyl sulfide, thereby suppressing their spectroscopic features," the authors report.

Another interesting result of this study concerns exoplanet magnetospheres. They find that hyperflares may help reveal the nature and extent of magnetospheres.

"More speculatively, proton events during hyperflares may reveal the existence of planetary-scale magnetic fields by highlighting particular regions of the planet. By identifying nitrogen- or hydrogen oxide-emitting flux fingerprints during magnetic storms and/or auroral precipitation events, one may be able to determine the geometric extent of exoplanetary magnetospheres."

IMAGE: Hyperflares might help us understand the extent of exoplanet magnetospheres by identifying the extent of nitrogen oxide flux fingerprints.

Other recent research has suggested that exoplanets subjected to flaring, especially around red dwarf stars, are not great locations to search for life. The flaring activity is too detrimental. But this study shows that there's more complexity to the situation.

Overall it shows that flaring could help us detect biosignatures in some cases. It also shows that while flaring can disrupt exoplanet atmospheres, in many cases they return to normal. It's also a fact that low-mass stars live much longer than stars like our Sun, meaning there's more time for life to develop on their planets.

This new work highlights how complicated the search for life is, and how many variables are involved. And it contains at least one surprise. Whereas flaring has been largely considered detrimental to exoplanet habitability, the fact that it may help detect biosignatures means there's more going on than expected.

This research required cooperation from scientists across many disciplines. It relied on climate scientists, astronomers, observers and theorists, and of course, exoplanet scientists.

"This project was a result of fantastic collective team effort," said Eric T. Wolf, a planetary scientist at CU Boulder and a co-author of the study.

"Our work highlights the benefits of interdisciplinary efforts when investigating conditions on extrasolar planets."