Explainer: what is an isotope?
ELIZABETH WILLIAMS, THE AUSTRALIAN NATIONAL UNIVERSITY    14 JANUARY 2013 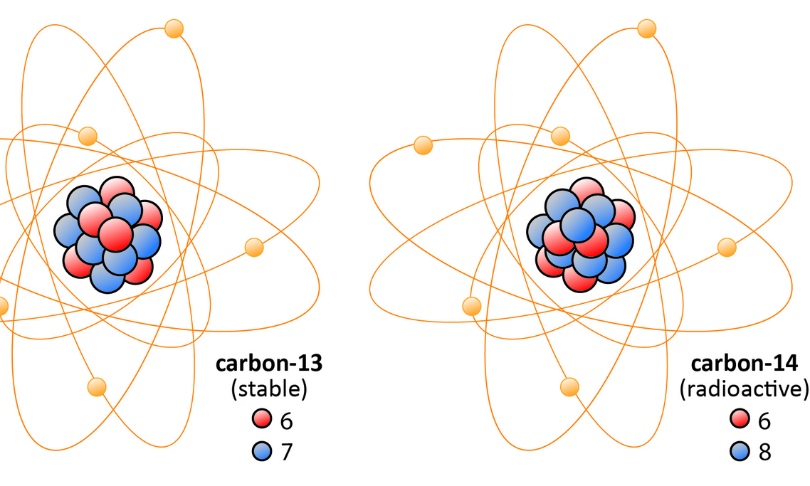 Two of the naturally occurring carbon isotopes. While each have the same number of protons and electrons, they differ in the number of neutrons.

If you’ve ever studied a periodic table of the elements (see below), you’re probably already aware that this table reveals a great deal about the chemical properties of the atoms that make up our world.

But you may not realise that each square on the periodic table actually represents a family of isotopes — atoms which share the same name and chemical properties, but have different masses.

To understand what isotopes are and how we can use them, we need to take a closer look at the interior of an atom.

An atom is composed of an incredibly dense core (called a nucleus) of protons and neutrons, surrounded by a diffuse cloud of electrons.

You can think of protons and neutrons as the same kind of particle with one key difference: the protons are positively charged, while neutrons carry no charge. This means protons can “feel” electric or magnetic fields, while neutrons cannot.

The electrons, which are much lighter than protons or neutrons, carry the same magnitude of charge as a proton but with the opposite sign, meaning that each atom that has equal numbers of protons and electrons is electrically neutral.

It is the electrons that determine the chemical behaviour of a particular element.

Isotopes of an element share the same number of protons but have different numbers of neutrons. Let’s use carbon as an example.

There are three isotopes of carbon found in nature – carbon-12, carbon-13, and carbon-14. All three have six protons, but their neutron numbers – 6, 7, and 8, respectively – all differ. This means that all three isotopes have different atomic masses (carbon-14 being the heaviest), but share the same atomic number (Z=6).

Chemically, all three are indistinguishable, because the number of electrons in each of these three isotopes is the same.

So different isotopes of the same element are identical, chemically speaking. But some isotopes have the ability to circumvent this rule by transforming into another element entirely.

This transformative ability some isotopes have has to do with the fact not all isotopes are stable, and is what led Frederick Soddy to his Nobel Prize-winning discovery of isotopes in 1913.

Some isotopes – such as carbon-12 – will happily continue to exist as carbon unless something extraordinary happens. Others – carbon-14, say – will at some point decay into a stable isotope nearby.

In this case, one of the neutrons in carbon-14 changes into a proton, forming nitrogen-14. During this process, which is known as beta decay, the nucleus emits radiation in the form of an electron and an antineutrino.

There are many factors that can cause a nucleus to decay. One of the most important is the ratio of protons to neutrons a particular nucleus has. If a nucleus has too many neutrons (the definition of “too many” depends on how heavy the nucleus is), there is a chance that it will decay towards stability.

The same is true if a nucleus has too many protons. This is one of the reasons why some isotopes of a given element are radioactive, while others are not.

From the bellies of stars

By now, you may be wondering how all these isotopes were created in the first place. As it turns out, this question is a complex one, but lends some truth to the adage that we are all made of star dust.

Some of the lighter isotopes were formed very early in the history of the universe, during the Big Bang. Others result from processes that happen within stars or as a result of chance collisions between highly energetic nuclei – known as cosmic rays – within our atmosphere.

Most naturally existing isotopes are the final (stable or long-lived) product resulting from a long series of nuclear reactions and decays.

In most of these cases, light nuclei have had to smash together with enough energy to allow the strong force – a glue-like bond that forms when protons and neutrons get close enough to touch – to overcome the electromagnetic force – which pushes protons apart. If the strong force wins out, the colliding nuclei bind together, or fuse, to form a heavier nucleus.

Our sun is a good example of this. One of its main sources of power is a series of fusion reactions and beta decay processes that transform hydrogen into helium.

Since the early 1900s, when the existence of isotopes was first realised, nuclear physicists and chemists have been seeking out ways to study how isotopes can be formed, how they decay, and how we might use them.

As it turns out, the nature of isotopes – their chemical uniformity, their nuclear distinctiveness – makes them useful for a wide range of applications in fields as diverse as medicine, archaeology, agriculture, power generation and mining.

But we have also found ways to make use of naturally occurring radioactive isotopes. Carbon dating, for example, makes use of the long-lived isotope carbon-14 to determine how old objects are.

Under normal circumstances, carbon-14 is produced in our atmosphere via cosmic ray reactions with nitrogen-14. It has a half-life of roughly 5,700 years, which means that half of a quantity of carbon-14 will have decayed away in that time period.

While a biological organism is alive, it takes in approximately one carbon-14 isotope for every trillion stable carbon-12 isotopes and the carbon-12 to carbon-14 ratio stays about the same while the organism lives. Once it dies, new intake of carbon stops.

This means the ratio of carbon-14 to carbon-12 changes in the remains of this organism over time.

If we extract carbon using chemical methods from a sample, we can then apply a method called accelerator mass spectrometry (AMS) to separate out the individual carbon isotopes by weight.

AMS makes use of the fact that accelerated particles with the same charge but different masses follow separate paths through magnetic fields. By making use of these separate paths, we can determine isotope ratios with incredible accuracy.

As you can see from these examples, we apply our knowledge of isotopes in a variety of ways. We produce them, detect them, extract them, and study them with the dual purpose of understanding why the atomic nucleus behaves as it does, and how we can harness its power for our benefit.

Editor's Note: This article was originally published by The Conversation, here, and is licenced as Public Domain under Creative Commons. See Creative Commons - Attribution Licence.