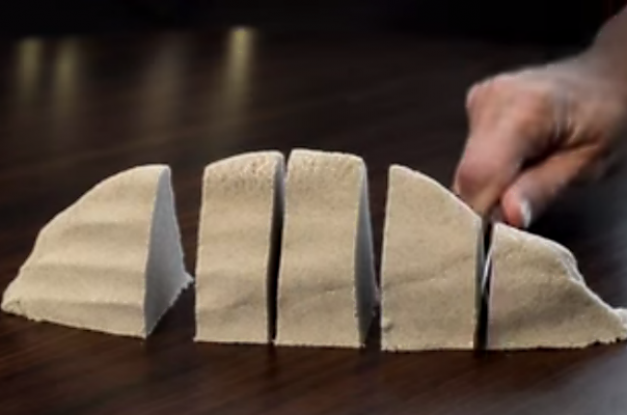 WATCH: This Is What It Looks Like When You Mix Sand With Silly Putty

You can slice it with a knife, shape it like cookie dough or crumble it in your fingers, and not a speck of it will get on your hands or your clothes. What's the secret of Kinetic Sand?

Manufactured in Sweden, Kinetic Sand sure looks like regular sand, and in fact, 98 percent of this novelty product is just that - sand. It’s the other 2 percent that gives it its strange properties - an ingrediant called polydimethylsiloxane. This very common silicon-based compound also happens to be a key component of Silly Putty - that stretchy, bouncy, rubbery substance every kid loves until it gets irrevocably stuck in the carpet.

By adding just a tiny bit of polydimethylsiloxane to some ultra-fine sand, Kinetic Sand becomes what’s known as a non-Newtonian fluid. Unlike Newtonian fluids, which have a constant viscosity that only changes as temperatures or pressures fluctuate (such as water freezing) and take on the shape of the container they’re placed into, non-Newtonian fluids follow their own set of rules. Also known as ‘strange liquids’, non-Newtonian fluids can change their viscosity under stress, such as when you shake them or hit them with a mallet.

Honey, for example, is a non-Newtonian fluid because the more you keep stirring it, the more liquid it becomes. Cream, on the other hand, becomes thicker the more you stir it. If you shake - and therefore increase the stress on - tomato sauce in a bottle, its viscosity will decrease, allowing it to flow better.

As a non-Newtonian fluid, Kinetic Sand acts like a viscous liquid, but also like an elastic solid. This is because the molecular structure of polydimethylsiloxane is held together by hydrogen bonds, a few of which can be easily broken when small amounts of stress are applied, allowing the sand to flow freely. When more stress is applied - say, when you’re cutting it with a knife - lots of hydrogen bonds are broken apart, allowing the substance to ‘tear’ into very neat pieces.