GM Potato Can Help Cut Pesticide Use by Up to 90 Percent, Study Shows

Environment18 May 2018
By Michelle Starr

A potato variety genetically engineered to resist potato blight can help reduce the use of chemical fungicides by up to 90 percent, according to a new study - drastically reducing the environmental impact of potato farming.

Potato blight, caused by a water mould called Phytophthora infestans, can rapidly obliterate potato crops, and is one of the biggest problems in potato farming. Growers can end up spraying fungicides as often as weekly in order to stave it off.

That's obviously not the best thing for the environment, so researchers have been seeking another solution.

Working together, scientists from Wageningen University & Research and Teagasc, the Irish Agriculture and Food Development Authority, have developed a two-pronged approach: a genetically modified potato, along with a new pest management strategy, that combine for healthy crops with minimal fungicide use.

The research starts with an approach based on Integrated Pest Management they call IPM 2.0. In addition to growing blight-resistant potatoes, it involves active pathogen population monitoring and a "do not spray unless" fungicide use strategy.

This strategy means farmers don't apply fungicide unless a resistant potato variety is at risk of blight infection by a pathogen that has adapted to the potato's resistance.

The team tested their strategy over three years in both Ireland and the Netherlands, two prominent potato growing countries, using three types of potatoes.

The first was a variety of Désirée that is susceptible to blight. The second was a naturally blight-resistant variety called Sarpo Mira.

The third variety was Désirée again, but it had been modified with a highly resistant gene from a wild potato variety using a process called cisgenesis - where genes are artificially transferred between closely related organisms that could be bred conventionally.

This allows the modification to take hold much more quickly.

"Cisgenesis allows enrichment of existing potato varieties in as little as 3 years versus current potato breeding programmes that require 10 years or more to produce a novel variety," Wageningen University explained in a press release.

"In addition to accelerating the breeding process, cisgenesis is more accurate than using conventional crossbreeding and selection methods." 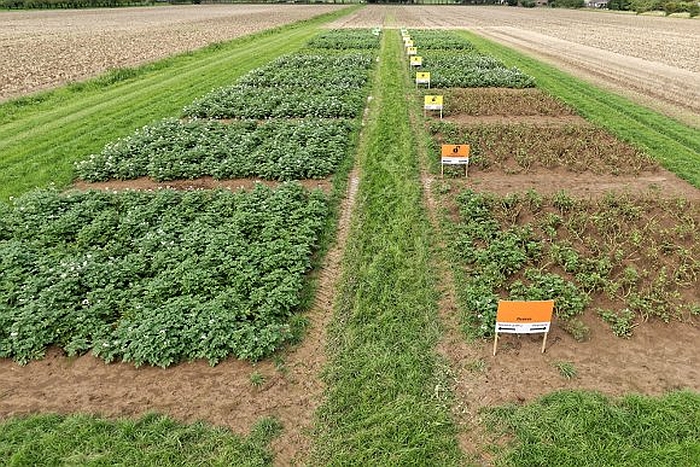 The three varieties of potato were cultivated using two methods: common practice, involving weekly fungicide sprays; and the new IPM 2.0 method. A third method of each variety was also grown without fungicides whatsoever - as a control.

Even on the susceptible Désirée variety, the method resulted in a 15 percent reduction in the use of fungicides, the researchers found.

But on the Sarpo Mira and the genetically modified resistant Désirée varieties, the IPM 2.0 method resulted in a consistent fungicide reduction of 80 to 90 percent.

And, based on the internationally recognised Environmental Yardstick for Pesticides, which gauges the effect of pesticides on water and soil life, as well as groundwater, this resulted in a significant reduction in environmental impact.

But the Sarpo Mira and resistant Désirée potatoes were even more impactful. Both crops grown using IPM 2.0 only collected around 40 points each.

"The full benefits of the IPM2.0 control strategy can … only be enjoyed when deployed with functional stacks of R genes," the researchers wrote in their paper.

"In this respect, cisgenesis is an essential tool to accelerate the breeding process in 'difficult to breed' crops such as potato enabling optimal use of IPM in line with the EU directive on the sustainable use of pesticides. Ultimately this would benefit the farmer, the environment and the consumer."

The paper has been published in the European Journal of Agronomy.