This Horrifyingly Huge Wasp Nest Will Haunt Your Nightmares

Wasps build their homes out of chewed-up vegetable fibre, painstakingly glued together until it resembles a papery stack of recycled carton. You'd think there's only so much fibre they can chew and stitch together with their tiny mouthparts.

Wrong. According to a video recently uploaded by a brave exterminator in Louisiana, wasp-cities can grow to humongous, absolutely sickening proportions. And they really hate it when you mess with their home.

Professional beekeeper and bug exterminator Jude Verret has been a licensed exterminator for 12 years, so that's not the first time he's dealt with a huge wasp nest.

As Verret told Beau Evans at The Times-Picayune, he's seen ones almost as large before, but "that one was really huge." The nest was found in the corner of a shed in the small city of Patterson, Louisiana.

As he pans the camera around, less than 30 seconds into the video the wasps decide to go on the offensive, swarming around the exterminator. The rest of it is drowned out in wasp attack noises.

The insects sound like a relentless hail of pebbles as they repeatedly hit the GoPro. And if that's what we're hearing in the video, the man in the protective suit must be hearing the same thing in his helmet.

And yet, he continued to bravely spray and dismantle the nest for a harrowing 45 minutes, as he explains in the description of the second part of the video.

According to Verret, the species he was dealing with were the southern yellowjacket wasps (Vespula squamosa), a common half-inch (1.3 cm) bug found in the southern US states. In the video he calls them "European yellowjackets", which typically refers to a different species also known as German yellowjackets.

These are not to be confused with European hornets (Vespa crabro), a disturbingly huge insect in the same family as all the yellowjackets which is in fact the only true hornet species in North America.

It makes sense that the nest would belong to Vespula squamosa though, since these insects are known to build huge nests in secluded locations which can survive for several years due to the warmer southern climate.

Miraculously, Verret didn't get stung at all during his adventure with the wasp nest. Even though he always wears full-body protective gear, a sting or two can still happen.

And you absolutely wouldn't want to encounter such a nest unprotected; in fact, that would probably amount to suicide.

"5 OR 6 STINGS WILL PUT YOU IN THE HOSPITAL," Verret responded to a YouTube commenter asking if there might be enough wasps there to kill someone.

Once all the insects were, presumably, dead, he laid out the entire nest contents on the lawn, lying down next to the spoils for reference. 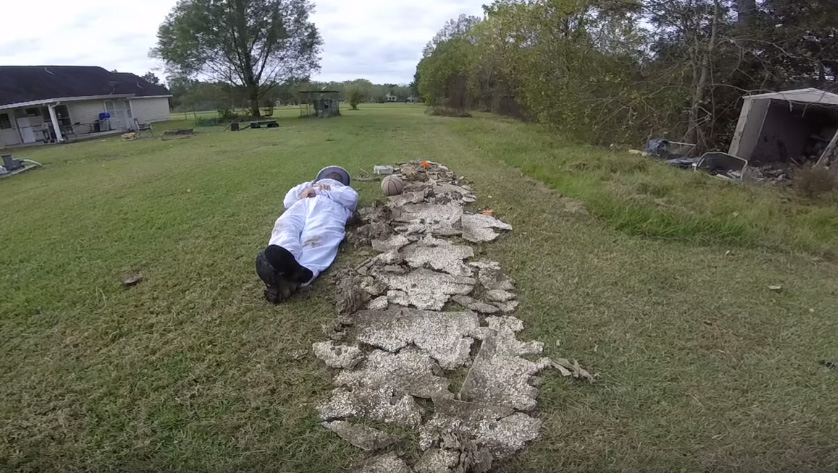 What a brave, brave man.