Before they were a polarising flavour bomb, though, anchovies used to be a terror of the seas. As fossil records newly reveal, millions of years ago anchovies up to a metre long (3.3 feet) hunted the oceans with gnashing fangs and one single long, curving, sabre-like incisor in their top jaws.

Fossils of two different species of predatory fish from the Eocene Epoch 55 million years ago have been identified as closely related to modern anchovies, which forage-feed rather than actively hunt for their prey.

It's certainly a peculiar relationship - but the appearance of both of these long-extinct species, palaeontologists believe, can be linked to the Cretaceous-Paleogene extinction event that wiped out the non-avian dinosaurs 66 million years ago.

The two fossils were found near Belgium and Pakistan. The former, named Clupeopsis straeleni, was first described in 1946, and came in at just under half a metre long. The latter was excavated more recently, in 1977, but had been tucked away in a museum collection. 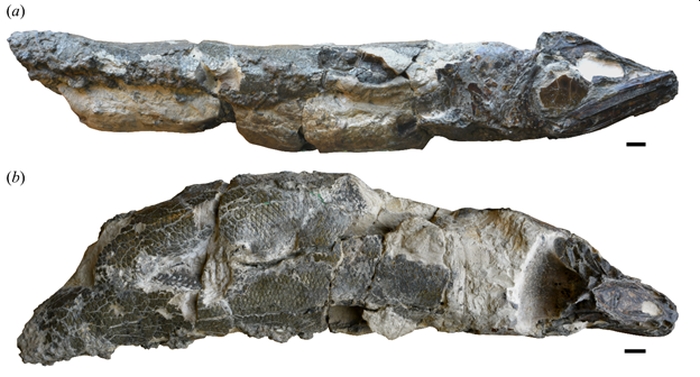 It wasn't until the team made a closer study that they realised it was a previously unknown species. It measured around one metre in length, and its wicked fangs inspired its new name - Monosmilus chureloides, after the Churel, the Urdu word for a shapeshifting, vampire-like demon with big fangs.

Although the two ancient fish differ in size and several minor physical features, they were remarkably similar - not least because of that single giant tooth.

The team, led by palaeontologists from the University of Michigan, made careful comparisons between the two and several modern fish, and determined that the fossil finds belonged to a previously unknown clade of clupeiform fishes. That's the order of ray-finned fish that includes herrings and anchovies. And they could even be stem engraulidae - the anchovy family.

But most clupeiformes, including anchovies, are planktivores. They don't have vicious teeth, or snapping jaws of the kind found on C. straeleni and M. chureloides. These indicate a predatory hunting style, with the single large tooth perhaps used to impale or trap their fishy prey.

So what does this mean? Well, after the Cretaceous-Paleogene extinction, many ecological niches ertr left empty. The life that remained went through a diversification boom, including a massive expansion of ray-finned fishes.

During the Cretaceous, shark remains dominate the fish fossil record. In the early Paleogene, ray-finned fishes rose to the fore.

But this would have been a highly competitive time, too; not every species was successful. Exactly how and why C. straeleni and M. chureloides then faded away is impossible to know, but it's likely they were out-competed by rival predators.

It just goes to show that survival of the fittest doesn't always mean the most aggressive with the scariest teeth.

Turns out your pizza topping had the best survival strategy all along.