We have seen the depths of hell, and it is a sloth. A cheerful-faced, slow-moving two-toed sloth, peering out of its comfortable position, snugly ensconced in... a human toilet.

Yes. We may be slightly late to the party on this one, but we have finally been introduced to the natural wonder that is the toilet sloth. Don't let that adorable face fool you. Sir David Attenborough, you should have warned us.

The story takes place in the Amazon rainforest of north-east Peru, home of the two-toed sloth (Choloepus didactylus).

This gorgeous, enigmatic animal spends most of its time hanging upside-down from trees, algae lending a greenish tint to its fur, and enjoying a herbivorous diet of leaves, flowers, fruit, bark and shoots.

There's also a human presence in that region of the forest. Built in 1984, a research station called Estación Biológica Quebrada Blanco (EBQB) has been almost continuously in use since 1997, with scientists rotating in and out as their research requires.

It has all the basic facilities needed, including, of course, basic pit toilet facilities - a pit dug in the ground with a seat placed over the top. And that's where, on a night in early November 2001, scientists first saw something never observed before. There was a sloth, hanging from the wooden bars over the toilet. And it was feasting. 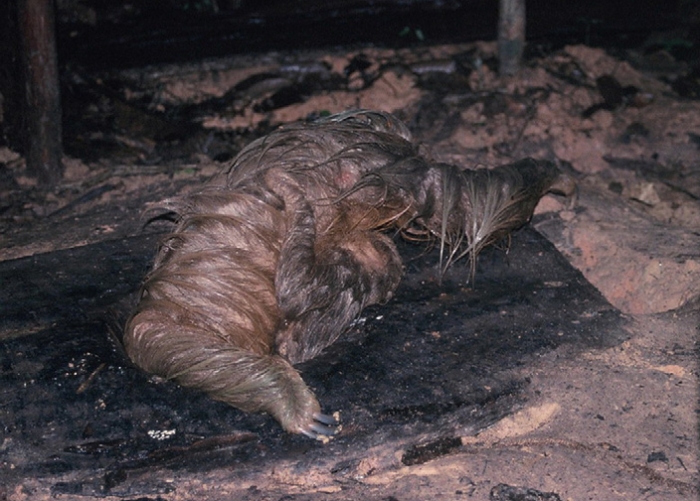 "It was scooping with one hand from the semi-liquid manure composed of faeces, urine and toilet paper and then eating from the hand," a team of researchers later wrote in a 2011 paper.

"When more persons gathered around the latrine to watch this bizarre behaviour, the sloth emerged from the latrine and climbed into the nearest tree."

A one-off behaviour could perhaps have been dismissed as a sick sloth behaving in an unusual manner not seen in healthy sloths, but then it happened again. And again. And again. All up, scientists at the outpost documented over 26 instances of sloths snacking on human excrement, straight out of that pit toilet.

There were individual sloths, and at least one mother sloth with her baby clinging to her fur (pictured above). They'd always come at night - in keeping with their nocturnal habits - and often when it was raining. They'd emerge from the loo sopping wet (pictured below), and make their slow way back to the forest canopy. 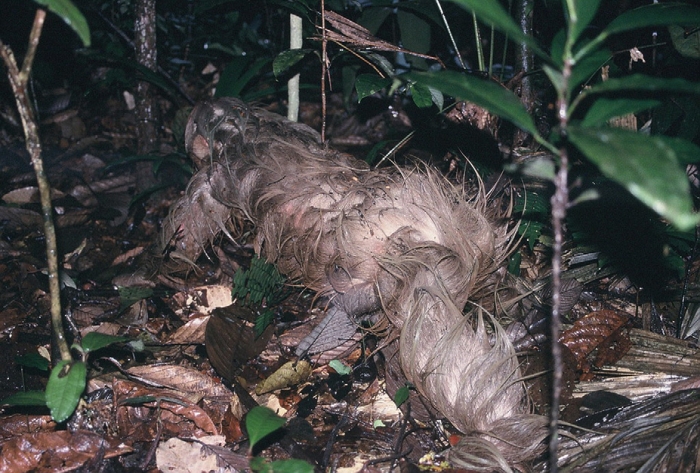 Why would the sloths - which have never been observed eating anything other than plants in the wild - do this?

A clue could lie in other animals that eat excrement, a practice called coprophagia. These include rodents and lagomorphs such as rabbits; and, to a lesser extent, dogs, foals, piglets and non-human primates. It's also been observed in cave salamanders.

And, generally, the reason seems to be that it's providing nutrients, or a means of digesting nutrients.

Rabbits, for instance, can't absorb nutrients effectively on the first pass, so they have to digest it twice. Koala mums feed their joeys a special type of poo to prepare the digestive system for a transition from milk to eucalyptus leaves. Cave salamanders may eat bat poo as a fall-back when food resources are otherwise scarce.

So, the researchers believe there could have been some nutrient or mineral in the toilets that was attractive to the sloths. Sodium, for instance, which a leafy diet often lacks; or even protein, found in the worms wriggling about in the slush.

But the practice could also have been dangerous to the animals - the transmission of harmful bacteria and other parasites from humans to sloths. From there, they could spread to other animal populations.

So, the researchers put an end to the illicit toilet raids. In 2007, they fenced the latrine with wire mesh that the sloths could not get through.

Honestly, it's for the best.

The paper was published in 2011 in Mammalian Biology.