When Canadian astronomer Robert Weryk discovered 'Oumuamua passing through our Solar System with the Pan-STARRS telescope, in October 2017, it caused quite a stir. It was the first interstellar object we'd ever seen coming through our neighbourhood. The excitement led to speculation: what could it be?

There was lots of fun conjecture on its origins. Was it an alien spacecraft? A solar sail? Or something more prosaic?

As more observational evidence rolled in, ideas on 'Oumuamua's nature followed. Was it a comet? It had no coma, so some thought it was a partially disintegrated comet, or an extrasolar comet.

Could it be an asteroid? 'Oumuamua was similar to asteroids in some respects, like its rotation rate. But it was an elongated cigar-shaped object, not round.

As time went on, more studies came out, their thoroughness hampered by 'Oumuamua's brief appearance in our Solar System, and by limited opportunity for observations. A 2019 study suggested that the object was indeed the fragment of a larger disintegrated interstellar comet.

Then in April 2020 a pair of researchers published another study on 'Oumuamua.

They confirmed the extrasolar origin of 'Oumuamua, saying that it was a fragment of a larger parent body, torn apart by tidal forces when it got too close to its star and trespassed on the Roche limit. 'Oumuamua was sent on a trajectory out of its solar system of origin, into ours.

Now, a new study presents evidence suggesting a different origin for our first interstellar visitor: It's not a fragment of a much larger body, but a chunk of frozen hydrogen. A space iceberg.

The new study is titled "Evidence that 1I/2017 U1 ('Oumuamua) was composed of molecular hydrogen ice". The authors are Darryl Seligman (Dep't. of Geosciences, University of Chicago) and Gregory Laughton (Dep't. of Astronomy, Yale University.) The paper has been accepted for publication in The Astrophysical Journal Letters. 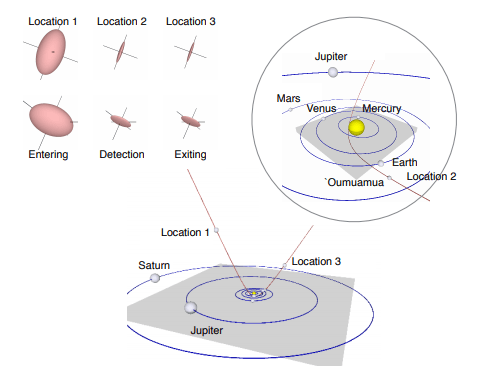 The evolution of Oumuamua's size and shape as it traverses our Solar System. (Seligman et al, ApJ, 2020)

"It's a frozen iceberg of molecular hydrogen," said Seligman in a press release.

"This explains every mysterious property about it. And if it's true, it's likely that the galaxy is full of similar objects."

'Oumuamua was difficult to observe. It was on its way out of our Solar System when it was discovered. It had already gone past the Sun, and its trajectory showed that it came from outside our Solar System, and would never return.

The object also accelerated, and there was no gravitational reason why it should. That led to some conjecture that it was a comet, since comets sometimes accelerate as they approach the Sun, due to off-gassing. But that leaves a coma, and 'Oumuamua didn't have one.

Then in 2019, the authors of this new study published, with Konstantin Batygin, a paper titled "On the Anomalous Acceleration of 1I/2017 U1 'Oumuamua." That work showed that Oumuamua was indeed a comet, just an unusual type of comet.

At the time, Seligman told NBC News, "We are quite confident in our hypothesis, and do not believe that there is a need to rely on alternative, less likely explanations for the non-gravitational acceleration."

At the same time, co-author Batygin told NBC News, "What our paper demonstrates is that some of its remarkable properties can be understood within the framework of relatively standard cometary physics."

In their new paper, Seligman and Laughton have refined that idea, writing "We show that all of 'Oumaumua's observed properties can be explained if it contained a significant fraction of molecular hydrogen (H2) ice."

In a press release, Seligman added that "The only kind of ice that really explains the acceleration is molecular hydrogen."

Molecular hydrogen ice has some strange properties. It only forms at a specific temperature, -259.14 °C, which is only a little above absolute zero, which is -273.15 °C. When it sublimates, it neither produces light nor reflects light. That's what makes it so hard to spot with telescopes.

The sublimation of the molecular hydrogen ice explains 'Oumuamua's acceleration. In their paper, Seligman and Laughton explain that "H2 sublimation at a rate proportional to the incident solar flux generates a surface-covering jet that reproduces the observed acceleration."

The authors say that the molecular hydrogen ice also explains 'Oumuamua's strange cigar shape, unusual for an object in space.

In a press release, Seligman explained it in plain language: "Imagine what happens to a bar of soap. It starts out as a fairly regular rectangle, but as you use it up, it gets smaller and thinner over time."

This explanation begs the question: How many more of these objects are there? Are they common? Quite likely, the researchers say.

"That we saw one at all implies that there's a ton of these things out there," Seligman said. "The galaxy must be filled with these dark hydrogen icebergs. That's incredibly cool."

The next question is, where did it come from? Where and how do these hydrogen icebergs form?

There aren't many possibilities, according to Seligman and Laughton. They say that 'Oumuamua likely formed in a Giant Molecular Cloud (GMC), the same structure that stars form from. GMCs are massive structures of freezing hydrogen, between 15 to 600 light years across. with some helium present as well.

This is what makes 'Oumuamua even more exciting.

"It would be the most pristine primordial matter in the galaxy. It's like the galaxy made it, and FedExed it out straight to us," said Seligman.

If Seligman and Laughton are correct, then we should keep our telescopic eyes open for the next 'Oumuamua that comes through our system.

Since they say that the object got its cigar shape from travelling through our Solar System, if we spot the next one soon enough, we can verify their theory and watch it take on a cigar shape as it moves through our neighbourhood.

Fortunately for all of us, a telescope ideally equipped to spot all kinds of transient objects is about to see first light. Some time later this year, the Vera Rubin Observatory, formally known as the Large Synoptic Survey Telescope, will come online.

That telescope's wide field of view and 8.4 meter primary mirror will image the entire available sky every few nights, and catalogue 90 percent of near-Earth objects larger than 300 metres.

It'll also spot supernovae, Kuiper Belt Objects, and other transients. If another 'Oumuamua comes, it's a fair bet that the Vera Rubin Observatory will spot it.

Though 'Oumuamua was the first one of these hydrogen icebergs we've spotted, that fact alone doesn't tell us much about their abundance. The authors think there's likely a great number of these objects, and that their numbers has consequences for planet formation.

"If 'Oumuamua's anomalous acceleration stemmed from sublimating H2 ice, it is likely that a large population of similar objects exists," they write in their paper.

"An analysis by Do et al. (2018) suggests that the space density of 'Oumuamua-like objects is n = 0.2 AU-3. Our estimate of 'Oumuamuas initial mass thus suggests a total mass of ~ 1 Earth mass of H2-rich bodies per star. A galactic sea of unbound planetesimal-sized objects has potential consequences for star and planet formation."