This 3.6-Million-Year-Old Fossil Is The Oldest, Most Complete Human Ancestor Ever Seen

After 20 years of slow, careful excavation, the world's most complete skeleton of an ancient human ancestor has just been unveiled.

It belongs to the genus Australopithecus, and it's 3.67 million years old. It is, by far, the most complete hominin skeleton globally older than 1.5 million years, and the oldest hominin skeleton ever found in South Africa. Its name is "Little Foot" - because the discovery of the skeleton started with four small footbones.

"This is one of the most remarkable fossil discoveries made in the history of human origins research and it is a privilege to unveil a finding of this importance today," said Ron Clarke from the Evolutionary Studies Institute at the University of the Witwatersrand in Johannesburg, who discovered the skeleton 20 years ago.

Little Foot is not the oldest hominin skeleton ever found - that honour goes to Ardi, a hominin that lived in Ethiopia 4.4 million years ago. But Little Foot is significantly more complete than Ardi, and may be more informative.

It's expected that Little Foot will be able to provide a wealth of information about our early Australopithecus ancestors - how they moved, how their skeletons are put together, what they looked like.

Isotope analysis of the fossilised tooth enamel may even help fill in some gaps about the environment Little Foot lived in, and the food she ate. 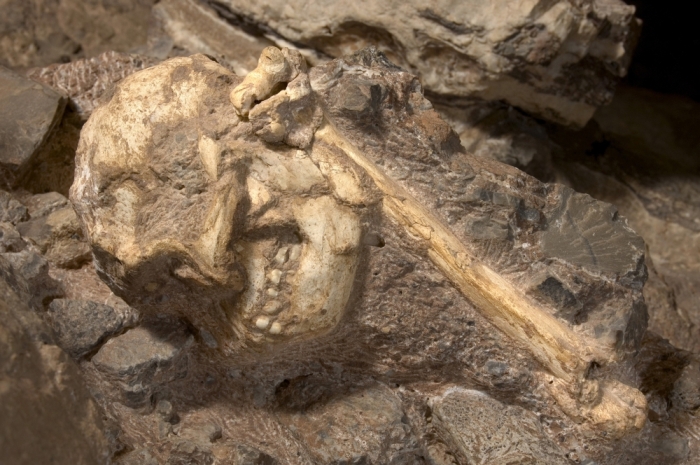 Little Foot is relatively small, standing about 135 centimetres (4 feet, 4 inches). She's a female skeleton, as determined by her pelvic structure, face and teeth. It's thought that the bones may have belonged to a young girl who met her demise falling down a shaft into the caves below.

Importantly, her presence suggests that hominins were spread out farther across Africa than previously thought, and she's the first skeleton that allows a comparison between arm length and leg length in a single individual.

Her legs were longer than her arms, which shows that she's much more like humans than apes. She walked upright, and probably lived in trees.

The fossilised skeleton was first found in the Sterkfontein caves not far from Johannesburg, more than 20 years ago.

Clarke was alerted to its presence in 1994 by foot and leg bones that had been blasted from the rock by lime miners years prior, but it wasn't until 1997 that the rest of the skeleton was found, deep in the cave.

It was embedded in a concrete-like rock called breccia, so excavating it from the cave was slow work. Large blocks of the breccia, in which the skeleton was embedded, were painstakingly removed from the cave. It took until 2012.

Meanwhile, in a laboratory, a team of  experts carefully removed the breccia from around the skeleton.

"My assistants and I have worked on painstakingly cleaning the bones from breccia blocks and reconstructing the full skeleton until the present day," Clarke said.

"The process required extremely careful excavation in the dark environment of the cave. Once the upward-facing surfaces of the skeleton's bones were exposed, the breccia in which their undersides were still embedded had to be carefully undercut and removed in blocks for further cleaning in the lab at Sterkfontein."

Researchers from around the world are currently studying the skeleton to learn more about this amazing specimen, and we can expect peer-reviewed studies in the upcoming years.