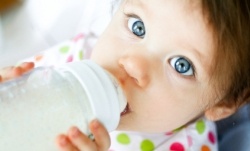 By shying away from naming formula in
headlines and abstracts, researchers are
masking its risks from parents.
Image: iStockphoto

Formula feeding should be clearly named in research showing its potential health risks to babies, according to a new study.

The study, led by Dr Julie Smith from the Australian Centre for Economics Research on Health at The Australian National University, shows that researchers reporting poorer health among formula-fed children too often shy away from including a mention of formula feeding in their titles or summaries.

“This is not helping properly informed health professionals and mothers,” Dr Smith said. “We looked at the findings of nearly 80 authoritative studies, all of which highlighted that formula-fed babies tend to be at higher risk of poor health than children fed on breast milk.

“Yet the vast majority of these studies did not mention formula feeding in the places that matter most for lasting impressions: headlines and abstracts. Rather than naming formula feeding as a significant risk factor, researchers seem to be treating this subject like Voldemort in the Harry Potter novels, as “He Who Shall Not Be Named.” For example, a study showing a higher incidence of a serious condition in formula fed infants was misleadingly named ‘Breastfeeding and necrotising enterocolitis,” she said.

Dr Smith and her colleagues stress that their research into how formula feeding is referred to in scientific studies was intended to ask an important rhetorical question about cultural attitudes and informed choice, and shows why blaming mothers for not breastfeeding is futile and misguided. They argue that initiatives to improve infant health by increasing breastfeeding have described the importance of accurate language, and the key role that well-informed health professionals play for women to breastfeed successfully.

“How can we expect physicians and other health professionals to be informed and convincing about the importance of breastfeeding if they themselves are not getting the facts on risks of formula feeding presented in a prominent and clear fashion?” Dr Smith said.

“Adopting the ‘Voldemort’ approach to describing the risks of formula feeding in published research harms the ability of physicians and other health professionals to support women, and reduces women’s ability to make informed choices.  If a mother seeks support and reassurance that continuing breastfeeding is worthwhile, such non committal research reporting means she may get non committal advice from health professionals, even though the evidence is clear that formula feeding disadvantages infant health.”