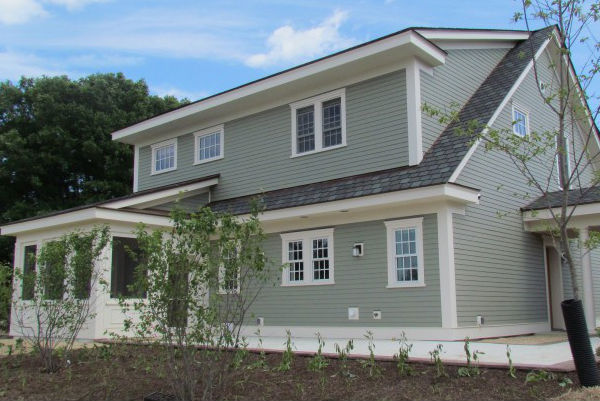 Built by researchers from the National Institute of Standards and Technology (NIST), the two-storey, 252-square-metre home is located in Washington, DC. On the outside it looks like a regular house, but on the inside it’s a laboratory for clean and sustainable energy research, with geothermal systems and double insulation to create a 'thermal envelope' to minimise the need for internal heating and cooling.

The experiment started midway through last year, when the research team moved a virtual family of four in.

"A computer simulator syndicated the energy consumption with that of a typical American family of four, the inhabitants going about everyday activities such as taking showers, watching TV and charging laptops,” says Nick Lavars at Gizmag. "There was more at play than a life-sized game of The Sims, however, with the researchers able to gain realistic insights into the energy efficiency and how viable planting such a home into a real-life American neighbourhood could be.”

An unexpected stint of bad weather really put the house to the test - for 38 of the 365 days in the year, its solar panels were largely covered in snow and ice, which meant they couldn’t harvest nearly as much energy as they could without obstruction. But despite that, the house still managed to generate some 13,577 kWh of energy. This amount exceeded the virtual family's energy usage by 491 kWh, which could either power their electric car, or be fed back into the grid.

"We made it, and by a convincing margin,” said one of the team, mechanical engineer Hunter Fanney in a press release. "From here on in, our job will be to develop tests and measurements that will help to improve the energy efficiency of the nation's housing stock and support the development and adoption of cost-effective, net-zero energy designs and technologies, construction methods and building codes.”

The estimated cost for fitting a real home out like this would be around US$162,700. Which sounds pretty pricey, but - other than doing the right thing by the environment - the upside is a zero-dollar annual electricity bill.

The house will remain as a sustainable energy research lab, where the team will continue to try and generate more energy from it, and test the effectiveness of new energy efficient appliances.