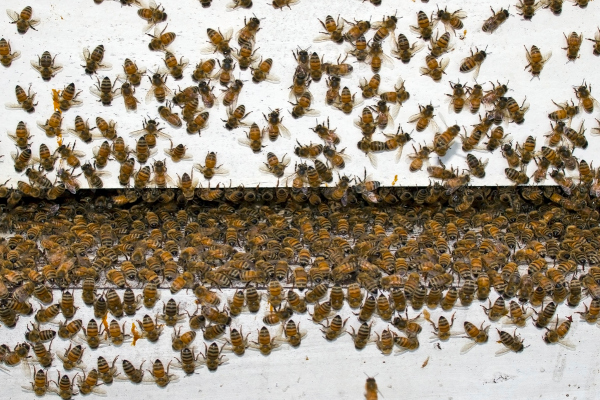 Antibiotic resistance is an increasingly serious problem in the western world, and in April this year, the World Health Organisation declared it a major threat to public health. For centuries, people have used raw honey to help fight infections, but scientists have struggled to figure out what gives it its antimicrobial properties.

Now a team of researchers from Lund University in Sweden has identified a unique group of 13 lactic acid bacteria (LAB) that come from the honey stomach of bees, and are found in fresh honey, that have an impressive ability to fight pathogens. The honey stomach is one of two stomachs found in bees, and it stores nectar, which worker bees later suck out and store in the hive.

Together, these live bacteria produce a number of active microbial compounds, such as hydrogen peroxide, fatty acids and anaesthetics, that can kill other harmful bacteria - it’s believed that this is the formula that protects the bee colony against collapse. Unfortunately, these LAB are processed out of the honey we buy in shops, but the researchers now believe they could be used to help treat anitibiotic resistance.

The team tested the bee bacteria in the lab against pathogen strains that cause serious infections in humans, including methicillin-resistant Staphylococcus aureus (MRSA), which can lead to fatal staph infections. The LAB was added to these superbugs and, impressively, it counteracted all of them. The results are published in the International Wound Journal.

The scientists also mixed the LAB with honey and applied it directly to horses who had wounds that wouldn’t heal and had been resistant to other treatments. After using the honey/bee bacteria substance, all of the wounds healed up.

So far, the bee bacteria has only been tested against human pathogens in the lab, so we don't know that they'll be as effective on human wounds, but these results are extremely promising.

The team explained in a press release that they believe the LAB are so powerful because they produce a broad range of substances, which change in response to they pathogen they’re up against.

"Antibiotics are mostly one active substance, effective against only a narrow spectrum of bacteria,” said Tobias Olofsson, the lead author of the study, in a press release.

“When used alive, these 13 lactic acid bacteria produce the right kind of antimicrobial compounds as needed, depending on the threat. It seems to have worked well for millions of years of protecting bees' health and honey against other harmful microorganisms. However, since store-bought honey doesn't contain the living lactic acid bacteria, many of its unique properties have been lost in recent times," he added.

The researchers will now move onto clinical trials in humans to see whether the LAB can help treat antibiotic-resistant infections. In the meantime, we might start stockpiling fresh, unprocessed honey.