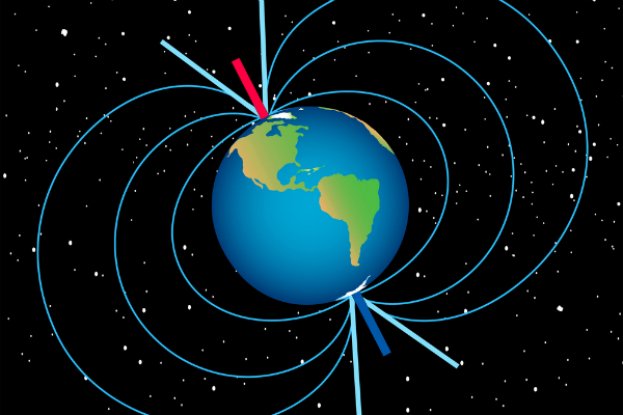 Earth’s Magnetic Field Could Flip Much Faster Than Previously Predicted

A new study suggests that Earth’s magnetic field could take just 100 years to flip - and there’s evidence it could happen again in a couple of thousand years.

We think of north and south as being pretty constant, but the Earth’s magnetic field has flipped many times throughout the planet’s history, generally without causing huge catastrophes.

The Earth’s magnetic field is dipole, like that of a magnet, which means it has two opposite poles. Usually this magnetic field maintains the same intensity for thousands to million of years, but for unknown reasons, it occasionally weakens and reverses direction, a process that scientists previously thought took thousands of years.

But now scientists have discovered that the last magnetic reversal happened 786,000 years ago, and it actually occurred very quickly, within around 100 years. This means north and south could swap positions in the span of a human lifetime, which is pretty crazy to think about.

The international study was led by scientists at the University of California Berkeley in the US, and examined sediment layers in an ancient lake in the Sulmona basin east of Rome, Italy. The results are published in Geophysical Journal International.

“It’s amazing how rapidly we see that reversal,” said Courtney Sprain, a University of California Berkeley graduate student, who co-authored the study, in a press release. “The paleomagnetic data are very well done. This is one of the best records we have so far of what happens during a reversal and how quickly these reversals can happen.”

The sediment that the team studied was deposited over a 10,000-year period by volcanic eruptions in the region. The magnetic field direction at the time affected how the ash settled at the bottom of the ancient lake, which means that the scientists have a clear record of which way north and south were pointing, and when things changed.

The results show that not only did the flip occur a lot quicker than we previously thought, it was also preceded by a period of magnetic instability that lasted around 6,000 years.

“What’s incredible is that you go from reverse polarity to a field that is normal with essentially nothing in between, which means it had to have happened very quickly, probably in less than 100 years,” said Paul Renne, co-author of the study, in a press release. “We don’t know whether the next reversal will occur as suddenly as this one did, but we also don’t know that it won’t.”

It’s an important breakthrough, because new evidence suggests the Earth’s magnetic field is currently decreasing 10 times faster than normal, leading some geophysicists to predict a flip of north and south within a few thousands years.

That’s not necessarily as bad as it sounds - there are no documented catastrophes associated with past reversals. But there would be some major issues - for starters, the pole flip could wreak havoc on our electrical grid, and could possibly even take it down altogether.

And because the Earth’s magnetic field protects us from radiation from the Sun and cosmic rays, the reduction of the magnetic field before the reversal could lead to increased rates of cancer.

The danger would be even greater if the flip was preceded by long periods of unstable magnetic behaviour - which occurred in the latest pole flip. The truth is, however, we know very little about what the effect of a pole reversal would be, but it's time we started to find out, and this new data will help us better understand the process.

“We should be thinking more about what the biologic effects would be,” said Renne.