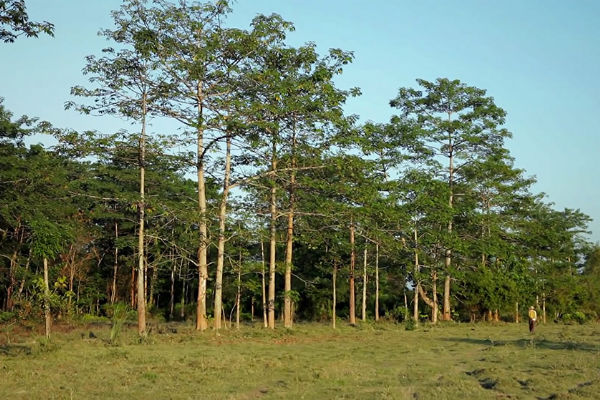 Home to a population of 150,000 residents, Majuli Island in northeast India is the largest river island on Earth. But due to the effects of erosion over the past hundred years, it's been shrinking, as strong winds sweep the soil and sand away and into the surrounding river water. The island's total area of 1,250 square kilometres has been reduced to less than half, and as of 2001, it covered just 421.65 square kilometres.

One resident has decided to do something to stem the erosion of Majuli Island. Since 1979, forestry worker Jadav Payeng has dedicated his life to fortifying the island by building a forest on one of its sandbars, tree by tree. Trees are crucial for keeping the effects of erosion at bay because not only do their roots hold the soil together, preventing it from shifting away, but they also act as windbreakers, slowing the wind down so it’s less likely to blow both soil and sand away.

Now, over three decades later, Payeng’s forest covers 550 hectares. This mean this one man’s forest is now larger than New York’s Central Park - which is just 341 hectares by comparison.

Named the Molai Forest, it is so rich and dense, large populations of wildlife, including several endangered species, have moved in. “One hundred and fifteen elephants live there for three months every year,” says Payeng in a documentary about him called Forest Man, released by Canadian filmmaker William Douglas McMaster last year. "In my forest there are also rhinos, deer, and many tigers. After 40 years, we have also seen vultures return to the area.”

You can watch McMaster's really beautiful documentary about Payeng and his photographer friend, Jitu Kalita, below: