Throughout history, Earth has experienced at least five major mass extinctions that wiped out most life around the globe. Most of these events pretty clearly coincided with catastrophes such as asteroid impacts, geological activity, and volcanic eruptions.

One event, however, is more of a mystery - the Late Devonian extinction 360 million years ago. We know of no major asteroid impacts from that time, and there's no mercury record suggesting major volcanism.

What we do know is that at that time, the world was warming as it emerged from a glacial period. This alone would not necessarily be sufficient to drive a mass extinction, but now scientists have found a worrying new component. The fossil record suggests a dramatic increase in ultraviolet radiation, caused by a temporary depletion of the ozone layer as the world warms.

It's a worrying conclusion - because it suggests that ozone depletion could be a natural response to a warming world. And the world is warming at a devastating rate right now.

The Late Devonian extinction took place across a timespan of between 500,000 and 25 million years, killing off up to 80 percent of all animal species alive at the time. But it also had a devastating effect on plants.

"Regarding pollen and spores, the terrestrial extinction is clearly expressed as the complete loss of diversity across the Devonian-Carboniferous (D-C) boundary with the extinction of at least four major spore groups that had dominated the spore assemblage," the researchers wrote in their paper.

But there was a potential explanation. A previous study in 2018 found that fossilised plant spores from the Permian-Triassic extinction event 252 million years ago had suffered extreme damage from UV radiation. This malformation prevented the plants from reproducing, resulting in mass vegetation die-outs.

This was attributed to ozone depletion due to massive volcanic activity - something we know can accelerate ozone depletion. This explanation would not hold up for the Late Devonian extinction (remember, no volcanoes that we know of), but it was possible that something else could have depleted the ozone. So a team of researchers turned to fossilised plant spores.

They collected rock samples from sites in Greenland, which was closer to the equator during the Late Devonian, and studied them for fossilised plant spores. And they found that many of the spores exhibited signs of damage from ultraviolet radiation. 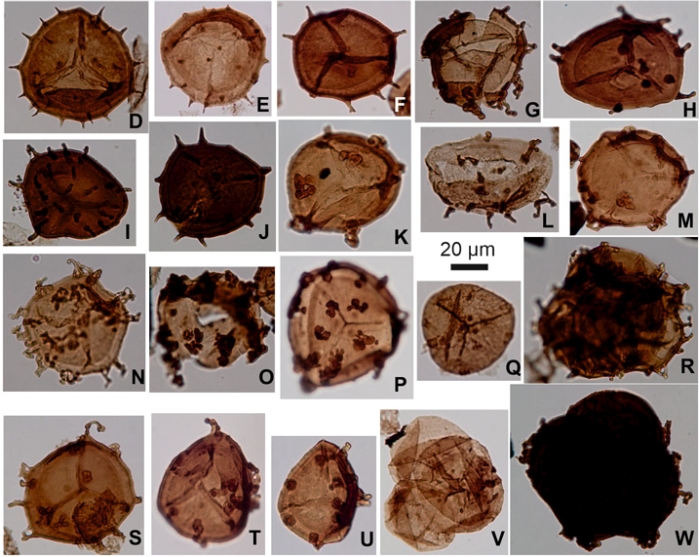 The spiny spores of a plant called Grandispora cornuta started appearing with malformed spines and irregular shapes (pictured above). Those of another plant called Verrucosisporites nitidus started appearing with unevenly spaced nubs and irregular shapes. And many spores were darker in colour - likely a protective pigmentation developed to defend against stronger ultraviolet radiation.

The scientists concluded that the ozone layer had indeed thinned, increasing the amount of ultraviolet radiation bathing the surface, destroying a great deal of plant species. And, as plants constitute the base of the food web, this has a cascading effect that wipes out herbivores, then the carnivores that eat them.

So what was the mechanism behind this ozone depletion? The warming itself, the scientists said. As temperatures increased, naturally produced fluorocarbons such as methyl chloride rose into the atmosphere, acting as a catalyst for the breakdown of the ozone layer.

We've already had a scare with the ozone layer in recent decades as the chlorofluorocarbons (CFCs) we used for refrigeration and propellants escaped into the atmosphere, weakening the ozone layer over Antarctica.

That hole is on the mend after we dramatically cut our use of CFCs, but more recently, a second hole opened and closed over the Arctic, due to weather linked to climate change. This research suggests rising temperatures can also damage our planet's protective layer.

"Current estimates suggest we will reach similar global temperatures to those of 360 million years ago, with the possibility that a similar collapse of the ozone layer could occur again, exposing surface and shallow sea life to deadly radiation," said Earth scientist John Marshall of the University of Southampton in the UK.

"This would move us from the current state of climate change, to a climate emergency."