A secret population of polar bears in Greenland has been discovered in a seemingly impossible habitat – one that, for most of the year, lacks the floating platforms of sea ice the beasts use to hunt. The unusual group, which scientists previously thought was part of another nearby population, has been hiding in plain sight for hundreds of years.

The bears live on the steep slopes around fjords – long and narrow coastal inlets, where glaciers meet the ocean – and hunt on a patchwork of glacial ice that breaks up in these inlets. The new discovery suggests that some polar bears, at least, may be able to adapt to sea ice disappearing as climate change worsens, the study suggests.

Still, that's no silver bullet for the species at large.

"Glacier ice may help small numbers of polar bears survive for longer periods under climate warming, but it is not available for the vast majority of polar bears," lead researcher Kristin Laidre, a wildlife scientist at Polar Science Center at the University of Washington, told Live Science in an email.

That's because this type of glacier ice is only found near a small fraction of other polar bear populations.

Related: Why aren't there polar bears in Antarctica? 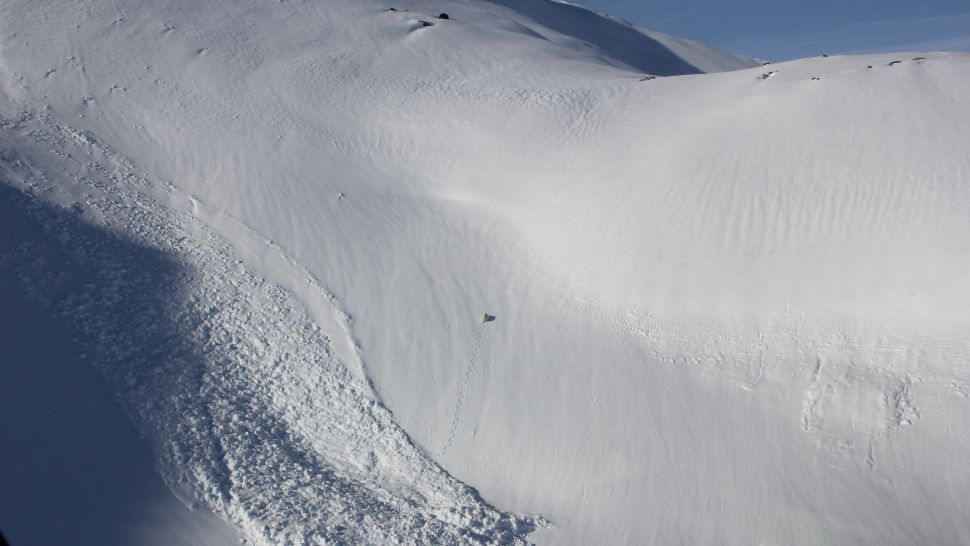 A lone polar bear is spotted on one of the fjord's steep slopes. (Kristin Laidre/University of Washington)

Until recently, scientists had identified 19 known subpopulations of polar bears (Ursus maritimus) living in the Arctic Circle. One of those populations spans a 1,988-mile (3,200 kilometers) stretch of the eastern coast of Greenland. But when researchers took a detailed look at this group to monitor their numbers, they realized the bears actually comprised two completely separate populations.

Researchers analyzed 36 years' worth of tracking data from bears tagged with GPS collars and found that bears from southeast Greenland did not pass above a latitude of 64 degrees north, and bears from the northeast did not pass the same line in the other direction. Genetic sampling from individual bears confirmed that the southeastern bears were distinct from their northeastern neighbors. 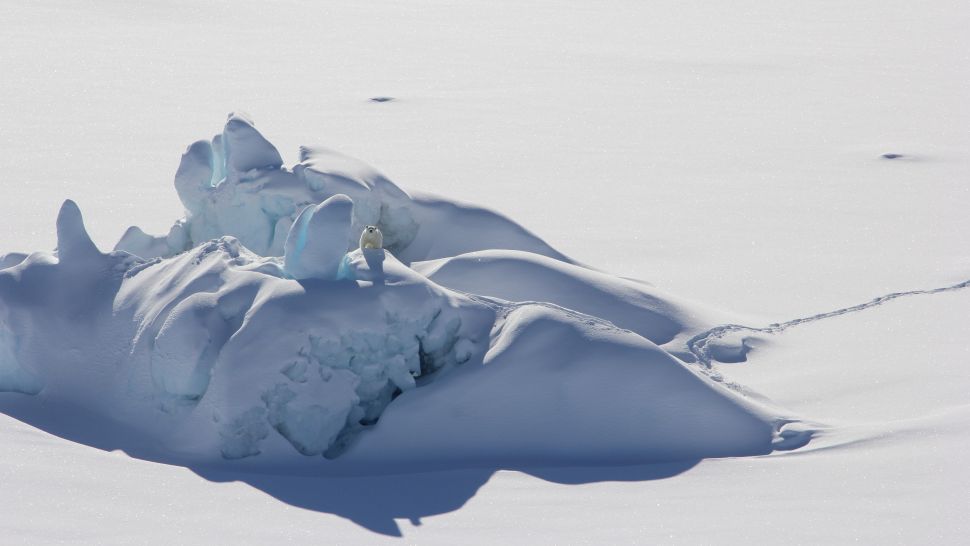 A southeastern polar bear is spotted from the air. (Kristin Laidre/University of Washington)

"We present the first evidence for a genetically distinct and functionally isolated group of polar bears in southeast Greenland, which meet [the] criteria for recognition as the world's 20th polar bear subpopulation," the researchers wrote in their new study, which was published June 16 in the journal Science.

Polar bears are listed as vulnerable to extinction, according to the International Union for Conservation of Nature (IUCN) Red List, and there are around 36,000 individuals left in the wild. But some studies have suggested that the species could vanish by the end of the century due to the effects of climate change.

Despite being the world's largest land predator, polar bears are actually listed as marine mammals because they rely on a predominantly aquatic diet, consisting mainly of seals. But in order to hunt for food, the snow-white bears rely on sea ice as a platform to stalk their prey from above. Unfortunately, rising temperatures caused by climate change are reducing the amount of sea ice available, shrinking their natural habitat.

Sea-ice extent waxes and wanes in the Arctic. The temporary ice sheets form on the ocean's surface during autumn and then melt away in spring. Polar bears normally survive for between 100 and 180 days without food as the sea ice disappears over the summer.

But warming temperatures in the Arctic mean that sea ice is melting sooner and freezing later, pushing polar bears to the brink of starvation. 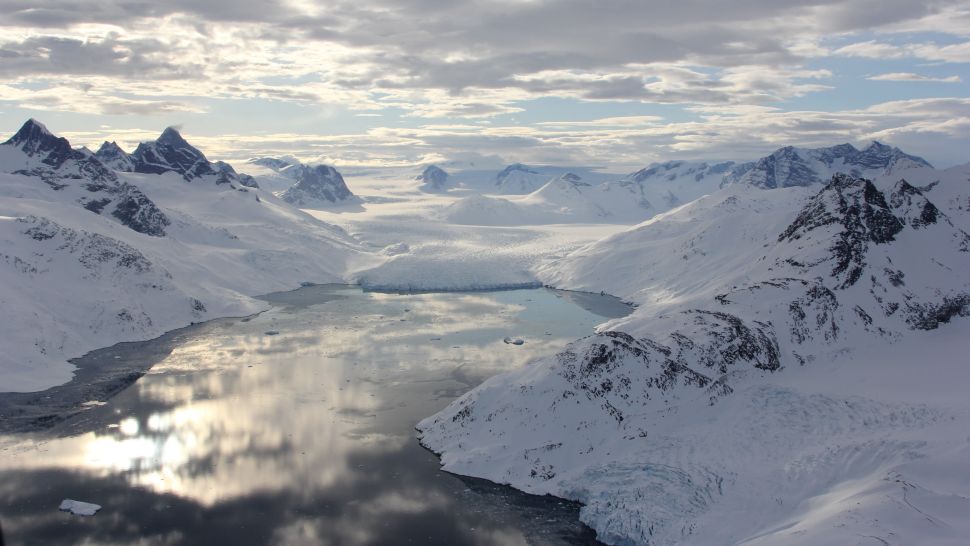 One of the fjords in southeastern Greenland where the new population resides. (Kristin Laidre/University of Washington)

The fjords that are home to the southeastern polar bears lie at the southern edge of the Arctic Circle and, as a result, the region is sea ice-free for more than 250 days a year.

These sea ice conditions mimic those predicted for the rest of the Arctic by the end of the 21st century, based on previous studies, which should make the fjords unlivable for polar bears, the researchers said.

But the southeastern bears seem to be managing surprisingly well without the sea ice.

The researchers think that the bears are taking advantage of glacial mélange, or the bits of ice that break off the fjords' glaciers and into the sea. The bears likely use these freshwater ice patches in the same way they use sea ice to hunt, which allows them to feed themselves during the long spells when sea ice is absent from the region.

"This suggests that marine-terminating glaciers may serve as previously unrecognized climate refugia," the researchers wrote.

The southeastern population also lives nowhere near any human populations, and the area is believed to be too hard to reach for most hunters, which adds an extra layer of security for the bears. However, the steep slopes of the fjords can also be quite tricky for the polar bears to traverse, which may limit their movements.

The birth rate among the new population is also very low compared with other populations, which researchers suspect is because potential mates struggle to reach one another. 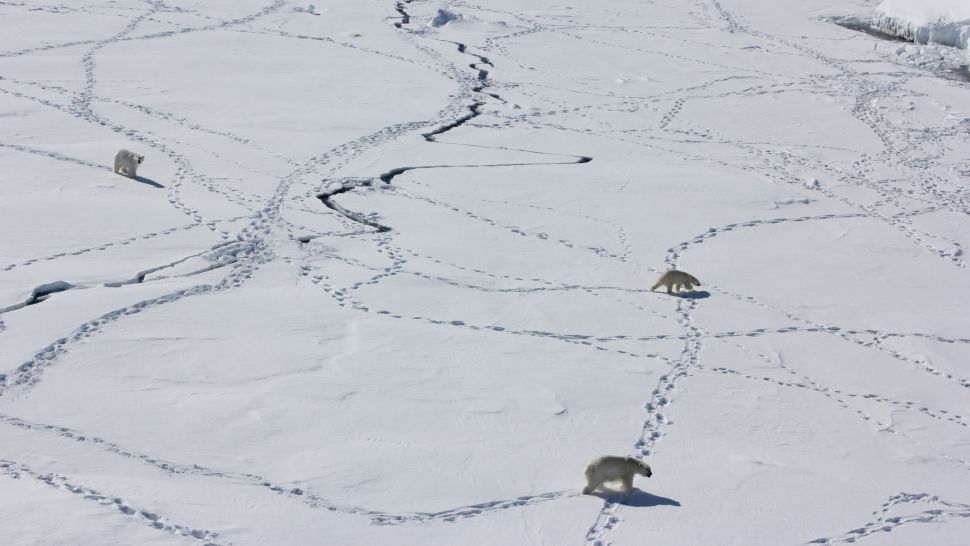 In the new study, the researchers used genetic data to identify two individuals that could be immigrants from the northeastern population. These immigrant bears appear to have adapted very well to hunting on glacial mélange, which suggests that other populations might be able to follow suit as sea ice conditions deteriorate in other areas.

The researchers identified other similar locations where glacial conditions could support polar bears in northern Greenland and Svalbard. However, moving to these locations may not be possible for a majority of bears.

Although the study does provide a glimmer of hope for some polar bears, the researchers insist that this does not make climate change any less of a threat to the Arctic predators.

"Loss of Arctic sea ice is still the primary threat to all polar bears," Laidre said. "This study does not change that."

Sea ice will continue to decline across the Arctic, which will decrease the survival odds for most polar bears, she added.

Polar bear parts are being smuggled around the world