Scientists are working on rechargeable, glow-in-the-dark plant life that could one day replace some of the inefficient, energy-intensive electric lights that we currently rely on for modern-day living.

The technology works through embedded nanoparticles that sit near the surface of leaves. A charge from an LED light lasting 10 seconds is enough for the plant to glow brightly for several minutes, and the nanoparticles can then be repeatedly recharged.

The research is part of a young but growing field called plant nanobionics: using nanoparticles to add extra functions and capabilities to living plants. This is the second generation of the tech to be developed.

"We wanted to create a light-emitting plant with particles that will absorb light, store some of it, and emit it gradually," says chemical engineer Michael Strano from MIT. "This is a big step toward plant-based lighting." At the core of the glowing plants are capacitors that can store light in the form of photons, then release them over time. A compound called strontium aluminate was used as a phosphor – a material able to absorb visible and ultraviolet light, and emit it as a glow.

Strontium aluminate can be formed into nanoparticles, and the microscopic dots were then coated in silica to protect them from damage. They were then embedded in plant stomata – the small pores on the surface of leaves that allow gases to pass in or out of the plant's tissues – accumulating as a thin film inside the spongy mesophyll tissue layer.

The team was able to get the technology working effectively across five different plant species, covering a variety of leaf sizes: basil, watercress, tobacco, daisy, and the Thailand elephant ear plant.

"We need to have an intense light, delivered as one pulse for a few seconds, and that can charge it," says MIT nanoscientist Pavlo Gordiichuk.

"We also showed that we can use big lenses, such as a Fresnel lens, to transfer our amplified light a distance more than 1 meter. This is a good step toward creating lighting at a scale that people could use." 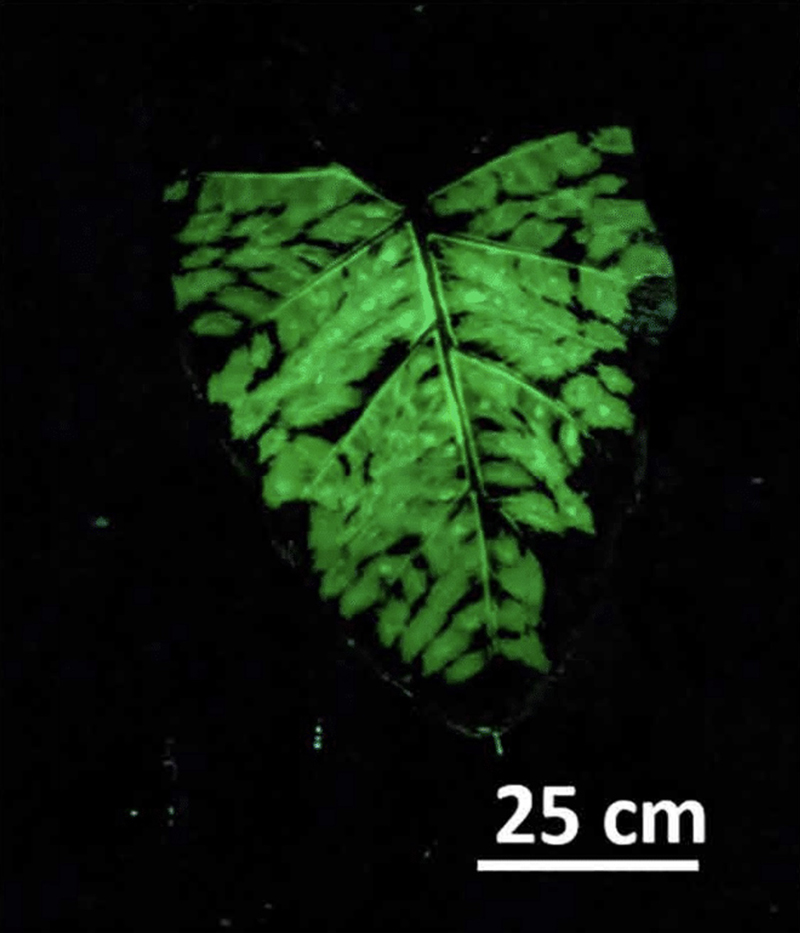 Further analysis revealed that the plants were still photosynthesizing normally, and could continue to evaporate water through their stomata. After the experiments, the scientists were able to extract and reuse around 60 percent of the phosphors that had been used.

What makes the technology even more promising is that it's a significant upgrade over the first-generation nanoparticles used to make glowing plants, which used the luciferase and luciferin enzymes (as found in fireflies) to produce a very dim glow.

Further down the line, the researchers say different types of nanoparticles could be combined on the same plant.

We're still a ways from this technology being something that can be used practically – the individual leaf lifespan for recharging seems to be about two weeks. But it's undoubtedly a bright innovation to keep an eye on for the future, which could one day literally change the way we see things.

"It represents a fundamental shift in how we think about living plants and electrical energy for lighting."