A newly developed system that monitors for blood biomarkers linked to mood disorders could lead to new ways to diagnose and treat depression and bipolar disorder, all beginning with a simple blood test.

While depression has been recognized for centuries and affects hundreds of millions of people worldwide, the traditional diagnosis still depends on clinical assessments by doctors, psychologists, and psychiatrists.

Blood tests might inform such health assessments, to check whether symptoms of depression might be related to other factors, but they're not used in clinical practice to objectively and independently diagnose the condition itself. The new research suggests this could be a practical option in the future.

In the new study, researchers have identified 26 biomarkers – measurable and naturally occurring indicators – in patients' blood variably linked to the incidence of mood disorders including depression, bipolar disorder, and mania. 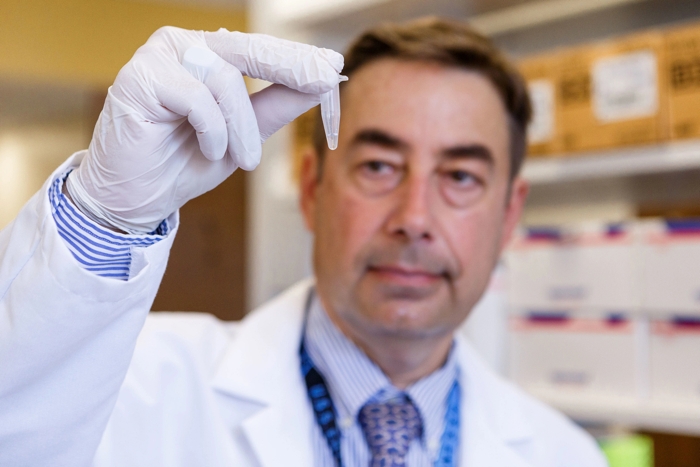 "Blood biomarkers are emerging as important tools in disorders where subjective self-report by an individual, or a clinical impression of a health care professional, are not always reliable," says psychiatrist and neuroscientist Alexander B. Niculescu from Indiana University.

"These blood tests can open the door to precise, personalized matching with medications, and objective monitoring of response to treatment."

In the new study, conducted over the course of four years, the researchers worked with hundreds of patients at the Richard L. Roudebush VA Medical Center in Indianapolis, conducting a series of tests to identify and confirm gene expression biomarkers in blood that might be tied to mood disorders.

In visits with patients with depression who agreed to take part, their mood (ranging from low to high) was tracked in each session, with samples of their blood taken at the time.

Comparing the samples against a massive database comprised of information gleaned from 1,600 studies on human genetics, gene expression, and protein expression, the team identified a series of biomarkers linked to mood disorders, shortening the list to 26 biomarker candidates after validating their results in a second cohort of patients.

In a final test, the researchers investigated another group of psychiatric patients to see whether the 26 identified biomarkers could determine mood, depression, and mania in the participants and also predict outcomes such as future hospitalizations.

After all these steps were taken, the researchers say 12 of the biomarkers provide particularly strong links to depression, with six of the same tied to bipolar disorder, and two biomarkers that can indicate mania.

"Not all changes in expression in peripheral cells are reflective of or germane to brain activity," the researchers write in their paper.

"By carefully tracking a phenotype with our within-subject design in the discovery step, and then using [convergent functional genomics] prioritization, we are able to extract the peripheral changes that do track and are relevant to the brain activity studied, in this case mood state, and its disorders."

According to the researchers, their precision medicine approach doesn't just identify propensity for depression and other mood disorders in patients but can help bioinformatically highlight specific drugs that might best treat their conditions.

In this study, the results suggested a range of existing non-antidepressant medicines – including pindolol, ciprofibrate, pioglitazone, and adiphenine – might function if used as antidepressants, while the natural compounds asiaticoside and chlorogenic acid could also warrant further consideration.

Of the top biomarker genes linked to mood disorders, the team says eight are involved with circadian functioning, which could help provide a molecular underpinning to explain the ties between conditions like depression and factors such as sleep disorders.

"That explains why some patients get worse with seasonal changes, and the sleep alterations that occur in mood disorders," Niculescu says.

While the blood test as described is a scientific proof of concept for now – meaning there's no telling when a test like this will become available more broadly – the researchers hope their results will convince the psychiatry community that precision medicine has a place in depression diagnostics and treatment.

Ultimately, existing doctor-assessed methods of diagnosing depression and other mood disorders are insufficient, they suggest, lagging behind the kinds of objective testing systems that are commonplace across other medical specialties.

"This is part of our effort to bring psychiatry from the 19th century into the 21st century, to help it become like other contemporary fields such as oncology," Niculescu says.

"Ultimately, the mission is to save and improve lives."

The findings are reported in Molecular Psychiatry.