Mammals and birds will now have to welcome a fishy outlier into their once exclusive fraternity of fully warm-blooded organisms, new research suggests.

The opah (Lampris guttatus) - or 'moonfish' - has a round body that usually grows to the size of a bicycle wheel, though some of the biggest known specimens can stretch up to 2 metres long. It hunts for food in both tropical and temperate oceans at depths close to 400 metres, and is rarely spotted, as it tends to prefer solitude rather than congregating in large groups.

Now, scientists in the US have discovered that these fish circulate heated blood throughout their entire body, giving them a unique advantage over other fish, particularly when hunting in cold, deep water.

Silvery-red opah are unusually speedy swimmers, and propel themselves by rapidly flapping their wing-like pectoral fins.

According to researchers from the US National Oceanic and Atmospheric Administration (NOAA) Fisheries department, it's this flapping movement that helps the fish generate internal heat, which also improves a range of other bodily functions, speeding up their metabolism and reaction times.

The researchers have described this unique system, by which opah produce, conserve, and circulate heat throughout their body, in the latest issue of Science.

"Before this discovery, I was under the impression this was a slow-moving fish, like most other fish in cold environments," lead author and marine biologist Nicholas Wegner, from the NOAA, said in a press release. "But because it can warm its body, it turns out to be a very active predator that chases down agile prey like squid and can migrate long distances." 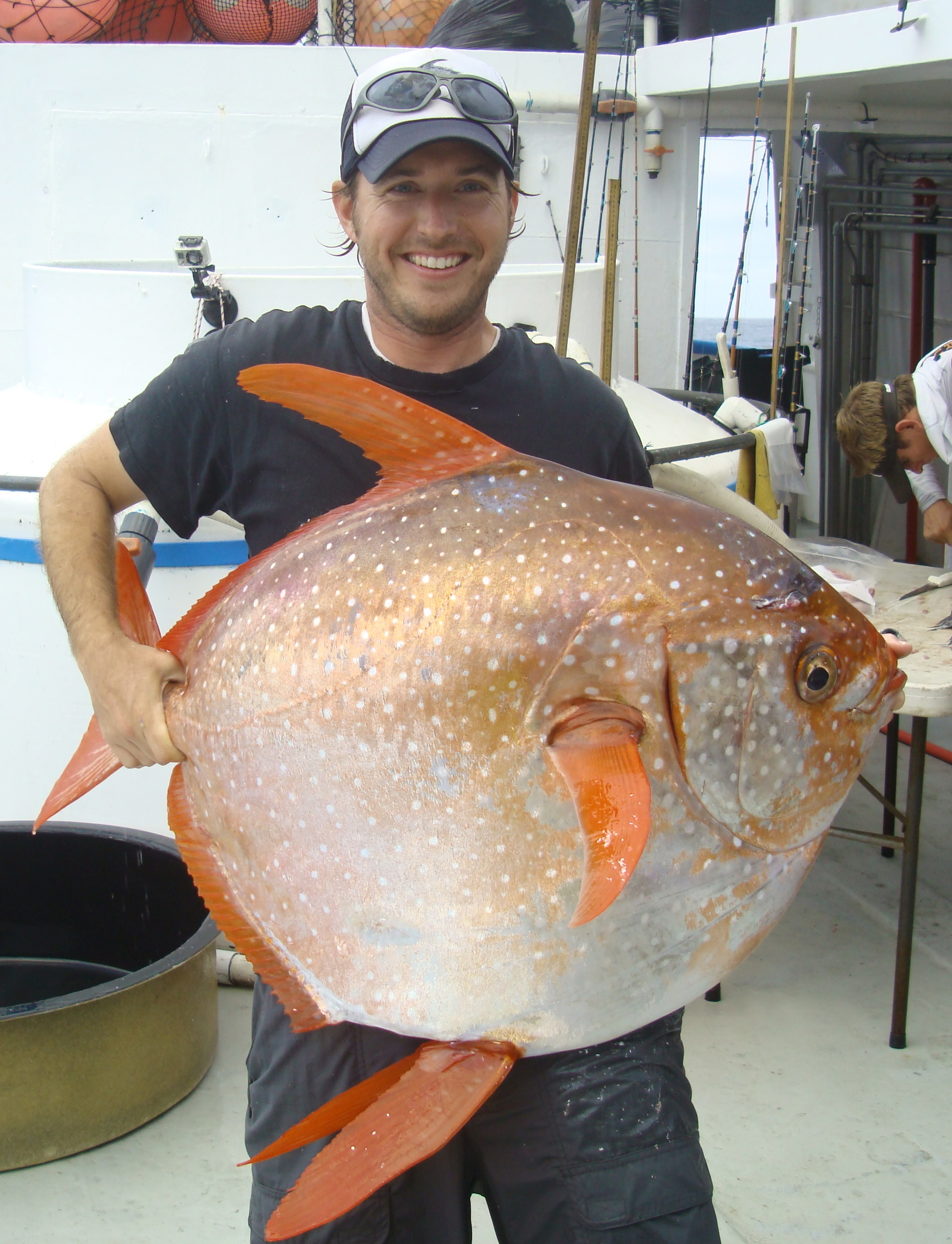 Warm-blooded animals are endothermic, meaning they can conserve heat and keep their body temperatures higher than that of the surrounding environment.

Until now, almost all fish were considered to be exothermic, meaning they need to source heat from the environment to stay warm.

That doesn't mean there haven't been any evolutionary advantages among fish. Tuna and certain sharks can warm specific parts of the bodies, such as the muscles required for swimming, their brains, and their eyes. This helps them hunt in deep ocean water, but in order to protect their vital organs from the cold temperatures, they still need to periodically surface.

And this trait is still pretty rare. As George Dvorsky from io9 points out, "among all fish, a scant 0.1 percent have evolved this capacity."

It makes the opah even more of an anomaly. By constantly flapping their fins, they keep their muscles about 4 to 5 degrees Celsius (7 to 9 degrees Fahrenheit) warmer than the surrounding water temperature.

The NOAA researchers learned this after attaching temperature sensors to fish off the coast of California and tracking their dives. They saw that their body temperatures remained relatively stable, even as the water around them started to cool off dramatically.

This relatively stable body temperature gives them a clear advantage for hunting in cold waters.

"With a more whole-body form of endothermy, opah don't need to return to surface waters to warm and can thus stay deep near their food source continually," Wegner told Reuters.

But generating heat is only one part of the problem. The fish also needs to conserve that heat and circulate it through their bodies to warm all of their vital organs.

When examining tissue samples, the researchers found an unusual structural design in the gills of the opah: blood vessels that carry warm blood away from the core wind around vessels carrying cold blood back into the body, after absorbing oxygen from water.

The design is known in engineering as 'counter-current heat exchange' and is used to conserve heat. For the opah, it means warm blood leaving the core is performing a crucial function, warming the incoming blood, and regulating the core temperature.

"The discovery that the opah can warm up its entire body changes the way we think about endothermy," Wegner told io9.

"If you had asked me a few years ago if a fish could warm up its entire body, I would have said it was extremely unlikely. This just goes to show how little we still know about many organisms and how much there is still left to discover."

And if you needed more proof that the opah was a curious, and seriously weird beast, check out the below footage of this live one cruising around off the coast of Italy.