Bird watchers in Massachusetts have been given an early Christmas present in the form of an incredibly rare sighting – a Steller's sea eagle, which is native to Asia almost 8,000 km (5,000 miles) away.

The large sea eagles are native to the Kamchatka Peninsula in far eastern Russia, and also seen in Japan, China, and Korea. There are estimated to be only around 5,000 individuals left, including this one, which has somehow made its way to the Taunton river in Massachusetts.

Steller's sea eagles (Haliaeetus pelagicus) are among the heaviest eagles on the planet, weighing 5 to 9 kg (11 to 20 pounds) and with a wingspan of up to 2.5 meters (8 feet).

They're pretty easy to identify with their Gonzo-like bright orange beak, and distinctive white-edged wings.

The coolest part is that this bird is likely the same individual that was spotted last month flying around eastern Canada; it's also been sighted as far north as Alaska, dating back to the summer of 2020, according to Smithsonian Magazine.

There's also been a sighting of a Steller's sea eagle in Texas, but its identifying marks weren't photographed so we can't be certain if it was the same individual.

"It's almost as far away from your origin as you can be," Andrew Farnsworth, a senior researcher at the Cornell Lab of Ornithology told the New York Times back in November. "It's mind-boggling."

Steller's sea eagles are listed as vulnerable on the IUCN Red List. 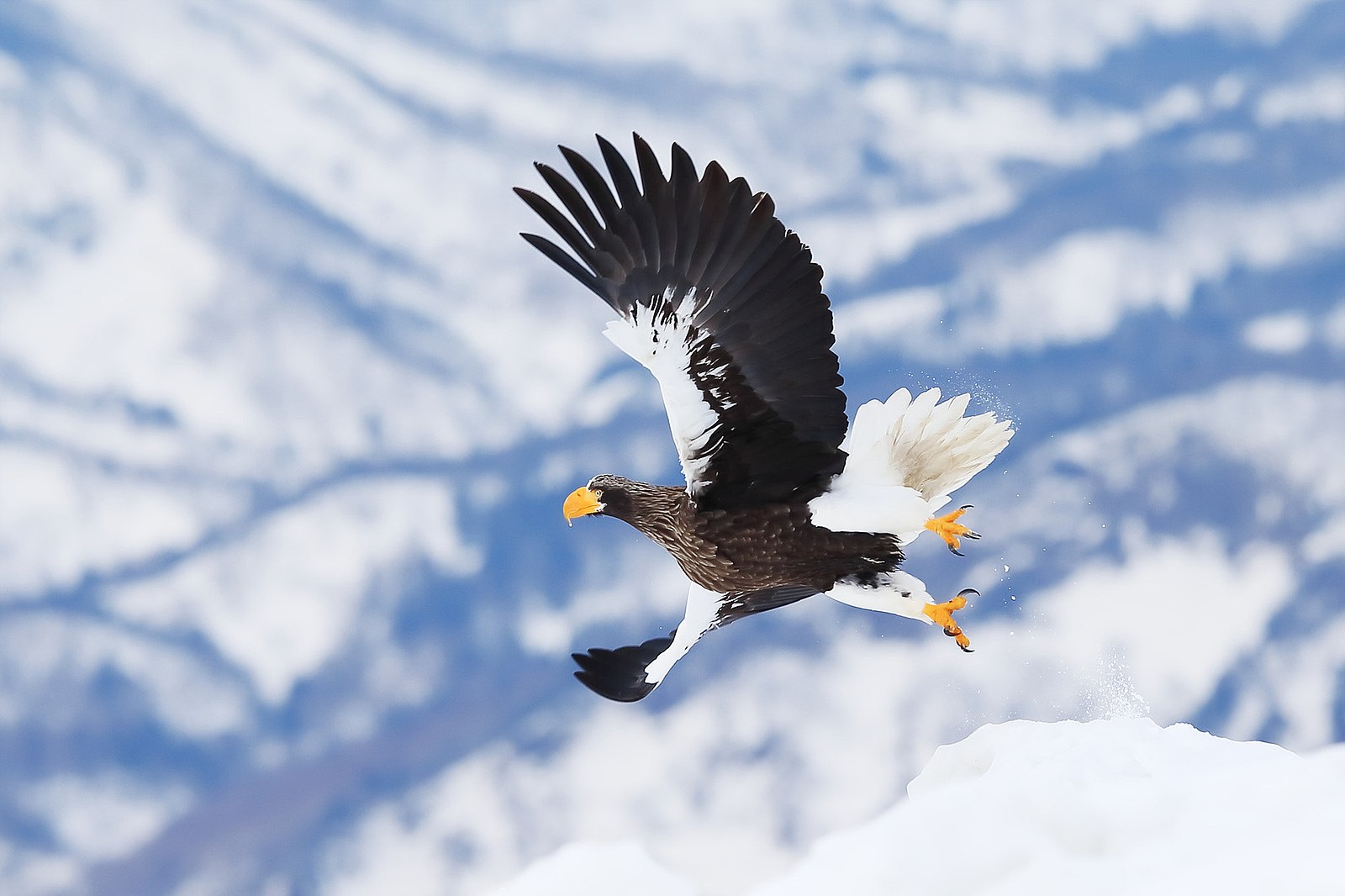 Birders have been able to identify it by the white markings on its wings – and we think it's safe to say they're pretty excited about its appearance near local rivers and coastlines, where it's likely hunting for salmon.

Nick Lund, advocacy and outreach coordinator for Maine Audubon, described sighting the bird over on his blog The Birdist.

"An absolute dream to be all of a sudden standing in this random park in southern Massachusetts looking at a wild, rare Russian monster," he wrote.

Look how much larger it is than the Bald Eagles just above it @MarionRenault pic.twitter.com/a21K77T3cu

So how did this majestic creature end up so far from home? It's not unheard of for birds to stray from their homeland, a phenomenon known as vagrancy.

Sometimes it's environmental factors such as climate change or habitat loss that push them out of their natural range. But sometimes it's just an internal navigation failure.

With this individual now having strayed for so long, Alex Lees, a conservation biologist at Manchester Metropolitan University in the UK told NPR that it's unlikely it'll return home.

"It may be doomed to perpetually wander in search of a member of its own species, remaining in suitable areas for months perhaps, but the urge to wander to find a mate may drive it to keep moving," Lees told NPR.

"It is still possible that this individual may find its way back, but the longer it stays the less likely this seems."

That might sound lonely right before Christmas, but Lees and colleagues just published a paper in Current Biology sharing evidence that some vagrant birds may actually be pioneers of new habitats, setting up new migratory routes for their species.

For now, we'd like to imagine this noble-looking bird isn't lost. It's just looking for a new place to call home.