The burial of a woman who lived and died thousands of years ago could shift our perceptions of one of the most sophisticated European Bronze Age civilizations, the El Argar.

It's one of the most lavish burials of the European Bronze Age; and, although the woman was buried with a man, most of the expensive grave goods were hers, suggesting that she was of much higher social status.

By comparing her grave to that of other El Argar women, researchers led by archaeologist Vicente Lull of the Autonomous University of Barcelona in Spain have concluded that women in this culture could have played a more important political role than we previously knew.

The grave itself, a large ceramic jar named grave 38, was discovered in 2014, at the La Almoloya archaeological site on the Iberian Peninsula, Spain. It was found beneath the floor of what seems to be the governing hall filled with benches in a palace, an interpretation bolstered by the richness of the grave contents. "The general lack of artifacts on the floor of [the hall] H9, combined with the structural prominence of the benches, indicate that social gatherings of up to 50 individuals could be held in this large room," the researchers wrote in their paper.

"We can only speculate as to whether such meetings were intended for discussion and participation in shared decision making or, rather, for the transmission of orders within a hierarchical chain of command. That the grave offerings of grave 38 far exceed those from any other contemporaneous tomb in La Almoloya, and in many other sites, suggests the second option."

The man's bones showed signs of wear and tear consistent with long-term physical activity, perhaps horse-riding, and a healed traumatic injury to the front of his head.

The woman's bones showed signs of congenital abnormalities, including a missing rib, only six cervical vertebrae, and fused sacral vertebrae. Markings on her ribs could have been produced by a lung infection when she died. 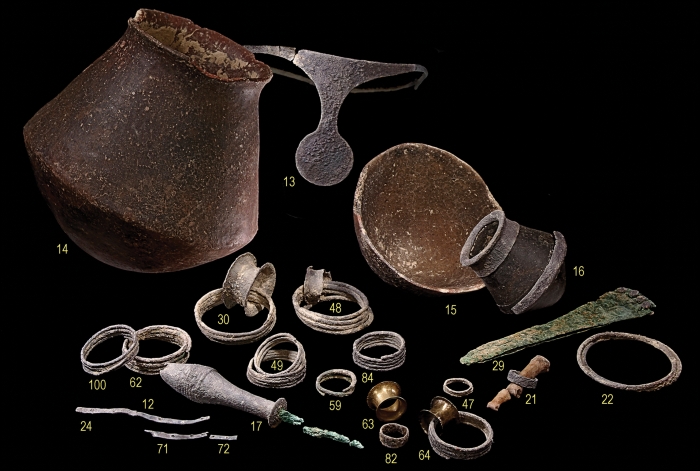 Nevertheless, she seemed to have been wealthy. The pair was buried with 29 items, most of which were made of silver, and most of which seemed to belong to the woman - necklaces, bracelets on her arms, an awl with a silver-coated handle, and silver-coated ceramic pots, the latter two of which would have required a great deal of skill in silversmithing.

The man wasn't without ornaments: his arm was adorned with a copper bracelet; he wore a necklace of seven large, colored beads; a dagger with silver rivets lay alongside him; and two gold ear tunnels were likely his, too.

But it was what the woman wore on her head that really excited the research team: a silver circlet, or diadem, placed with a silver disc that would have extended down to her forehead or the bridge of her nose. It's similar to four other diadems found in the 19th century in richly appointed women's graves. "The singularity of these diadems is extraordinary. They were symbolic objects made for these women, thus transforming them into emblematic subjects of the dominant ruling class," said archaeologist Cristina Rihuete-Herrada of the Autonomous University of Barcelona in Spain.

"Each piece is unique, comparable to funerary objects pertaining to the ruling class of other regions, such as Brittany, Wessex and Unetice, or in the eastern Mediterranean of the 17th century BCE, contemporary to our Grave 38."

The silver in the grave goods had a combined weight of around 230 grams (8 ounces). This is a staggering amount of wealth to bury: in Babylon at this time, the daily wages for a laborer were around 0.23 to 0.26 grams of silver. These two people were buried with 938 days' worth of Babylonian wages.

Previous analyses had proposed that the women buried in such rich graves were either sovereigns, or the wives of sovereigns. It's still impossible to tell, but the research team believes that the evidence points towards the former.

"The funerary goods buried with these men were of lesser quantity and quality. As swords represent the most effective instrument for reinforcing political decisions, El Argar dominant men might have played an executive role, even though the ideological legitimation as well as, perhaps, the government, had lain in some women's hands."

As women have wielded political power often throughout history, would that really be such a surprise?