The space around the Milky Way isn't vacant. It's swarming with dwarf galaxies – small, faint, and low in mass, with as few as around 1,000 stars each.

This is not unusual. We know from our observations of other large galaxies that dwarf galaxies often congregate nearby, and can become captured in the gravitational field of the larger object.

Astronomers have so far identified nearly 60 smaller galaxies within 1.4 million light-years of the Milky Way, though it's likely there's a lot more hiding in the dark. Most look like they're hanging around, like fruit flies around a banana.

According to a new analysis of data from the Gaia satellite, however, most of those galaxies are actually relatively new to the area – too new to be orbiting the Milky Way, at least not yet, researchers think.

"We conclude that due to their unequaled high energies and angular momenta, most dwarfs cannot be long-lived satellites, and if they could be bound to the Milky Way, they are at first passage, i.e., infalling less than 2 billion years ago," researchers write in a new paper led by astrophysicist François Hammer of the Paris Observatory in France. 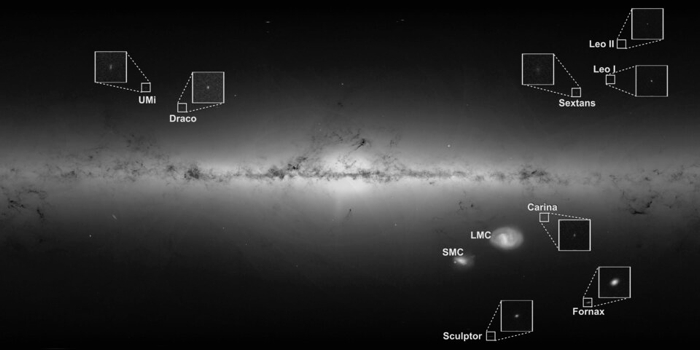 Dwarf galaxies in the space around the Milky Way. (ESA/Gaia/DPAC, CC BY-SA 3.0)

The Gaia mission is an ongoing project to map the Milky Way with the greatest precision yet, including the three-dimensional positions, motions, and velocities of the stars and objects therein (and a little way outside).

Using measurements of these properties, Hammer and his colleagues used data from the early third data release from Gaia to calculate the movements of 40 dwarf galaxies outside the Milky Way. Then they used parameters such as the three-dimensional velocity of each galaxy to calculate its orbital energy and angular momentum.

The results were really intriguing – because they showed that most of the dwarf galaxies assumed to be Milky Way satellites are moving a lot more quickly than objects known to be in orbit around the Milky Way, such as stars from Gaia-Enceladus and the Sagittarius dwarf spheroidal galaxy.

The Milky Way has repeatedly cannibalized other galaxies over its long history. Gaia-Enceladus, also known as the Gaia Sausage, was subsumed around 9 billion years ago. Its traces remain in a population of stars orbiting at relatively low energies.

The Sagittarius dwarf spheroidal galaxy is currently being disrupted by tidal (gravitational) forces and incorporated into the Milky Way, a process that started around 4 to 5 billion years ago. Those stars are whizzing around a bit faster than the Gaia-Enceladus stars.

The dwarf galaxies are moving even more energetically still. This, the team concludes, means that these dwarf galaxies can't have been close to the Milky Way long enough for the massive galaxy's gravitational field to have slowed them down.

It's possible that some of the dwarf galaxies will be captured in the Milky Way's orbit (although it's impossible to say which ones), but how long they will remain is an open question.

"The Milky Way is a big galaxy, so its tidal force is simply gigantic and it's very easy to destroy a dwarf galaxy after maybe one or two passages," Hammer explains.

If a dwarf galaxy can survive longer than this – as had been thought for the Milky Way dwarf galaxies – something must be holding them together, such as higher concentrations of dark matter, the invisible glue that binds the Universe together.

The possibility that dwarf galaxies have a surprising amount of dark matter is already strongly hinted at by the motions of their stars, which cannot be explained by the presence of normal matter alone.

The new findings suggest that dark matter need not necessarily be included in our models of these galaxies; future research can study the possibility of whether they are currently undergoing tidal disruption with a wider set of parameters to play with.

It's also worth noting that the researchers' results are not dissimilar to a 2006 paper that found the velocities of the Large and Small Magellanic Clouds were much higher than thought, based on Hubble data, suggesting that they are not Milky Way satellites. That notion appears to have since been abandoned by at least some of the researchers.

Nevertheless, there is a lot we don't know about objects in and around the Milky Way, and there's absolutely no doubt that Gaia is changing our understanding of our little corner of the Universe.

"Thanks in large part to Gaia, it is now obvious that the history of the Milky Way is far more storied than astronomers had previously understood," says astrophysicist Timo Prusti of the European Space Agency.

"By investigating these tantalizing clues, we hope to further tease out the fascinating chapters in our galaxy's past."