Sunspot Activity on The Sun Is Seriously Exceeding Official Predictions

Weather predictions here on Earth are more accurate than they've ever been; trying to predict the behavior of our wild and wacky Sun is a little more tricky.

Case in point: according to official predictions, the current cycle of solar activity should be mild. But the gap between the prediction and what's actually happening is pretty significant – and it's getting wider. Sunspot counts, used as a measure for solar activity, are way higher than the predicted values calculated by the NOAA, NASA, and the International Space Environmental Service.

In fact, sunspot counts have been consistently higher than predicted levels since September 2020. This could mean that, in contrast to predictions, the Sun is in the swing of an unusually strong activity cycle.

The Sun is a strange and dynamic place, and far from consistently active, with 11-year activity cycles that are linked with its magnetic field. These cycles have a marked peak and trough known as solar maximum and solar minimum, which solar scientists calculate based on sunspot numbers.

That's because the Sun's magnetic field controls its activity. Sunspots are temporary regions with strong magnetic fields, and solar flares and coronal mass ejections are produced by magnetic field lines snapping and reconnecting, often at these sunspot sites.

Solar minimum, when the Sun's magnetic field is at its weakest, is characterized by minimal sunspot activity. The most recent solar minimum took place in December 2019. We're currently in Solar Cycle 25, headed for solar maximum, slated for July 2025, the period at which sunspot activity peaks. 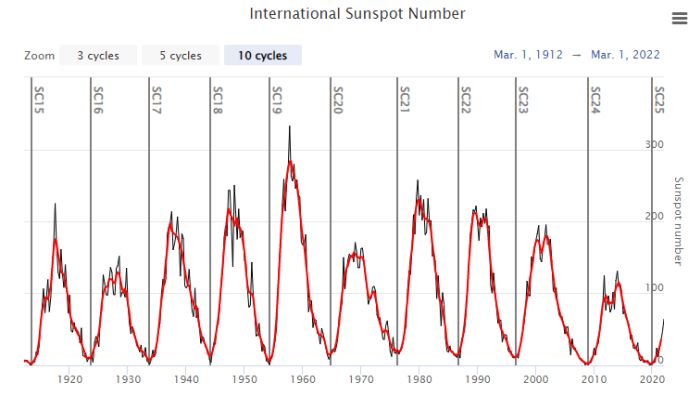 By contrast, the number of sunspots for the last 18 months has been consistently higher than predictions. At time of writing, the Sun has 61 sunspots, and we're still over three years from solar maximum.

If we are in for a stronger solar cycle, though, that could mean something really interesting. In 2014, a team of scientists led by solar physicist Scott McIntosh of the US National Center for Atmospheric Research looked at long-term solar cycle trends, and found that the 11-year timing is just an average. Some solar cycles are a little longer than 11 years, and some are a little shorter.

This, McIntosh and his colleagues predicted in 2020, meant that Solar Cycle 25 was likely to be stronger – perhaps among the strongest on record. And the climbing sunspot numbers would suggest they may have been onto something.

"Scientists have struggled to predict both the length and the strength of sunspot cycles because we lack a fundamental understanding of the mechanism that drives the cycle," McIntosh said at the time.

"If our forecast proves correct, we will have evidence that our framework for understanding the Sun's internal magnetic machine is on the right path."

In turn, this means we might be in for some pretty spectacular solar storms, following eruptions of solar flares and coronal mass ejections on the Sun. When the solar particles launched into interplanetary space collide with Earth's magnetic field and atmosphere, they can cause communications blackouts, power grid fluctuations and spectacular auroras. Aurora chasers are already having an absolute field day.

We probably won't have confirmation until after solar maximum, but we're looking forward to learning some fascinating new things about our fabulous home star. And gosh it's fun watching the solar cycle play out.