Saturn's largest moon, Titan, is a mysterious place; and the more we learn about it, the more surprises it seems to have in store.

Aside from being the only body beyond Earth that has a dense, nitrogen-rich atmosphere, it also has methane lakes on its surface and methane clouds in its atmosphere. This hydrological-cycle, where methane is converted from a liquid to a gas and back again, is very similar to the water cycle here on Earth.

Thanks to the NASA/ESA Cassini-Huygens mission, which concluded on September 15th when the craft crashed into Saturn's atmosphere, we have learned a great deal about this moon in recent years.

The latest find, which was made by a team of UCLA planetary scientists and geologists, has to do with Titan's methane rain storms. Despite being a rare occurrence, these rainstorms can apparently become rather extreme.

Led by Saun P. Faulk, a graduate student at UCLA's Department of Earth, Planetary, and Space Sciences, the team conducted simulations of Titan's rainfall to determine how extreme weather events have shaped the moon's surface.

What they found was that the extreme methane rainstorms may imprint the moon's icy surface in much the same way that extreme rainstorms shape Earth's rocky surface.

On Earth, intense rainstorms play an important role in geological evolution. When rainfall is heavy enough, storms can trigger large flows of water that transport sediment into low lands, where it forms cone-shaped features known as alluvial fans.

During it's mission, the Cassini orbiter found evidence of similar features on Titan using its radar instrument, which suggested that Titan's surface could be affected by intense rainfall.

While these fans are a new discovery, scientists have been studying the surface of Titan ever since Cassini first reached the Saturn system in 2006. In that time, they have noted several interesting features.

The seas – Kraken Mare, Ligeia Mare, and Punga Mare – measure hundreds of km across and up to several hundred metres deep, and are fed by branching, river-like channels. There are also many smaller, shallower lakes that have rounded edges and steep walls, and are generally found in flat areas.

In this case, the UCLA scientists found that the alluvial fans are predominantly located between 50 and 80 degrees latitude. This puts them close to the center of the northern and southern hemispheres, though slightly closer to the poles than the equator.

To test how Titan's own rainstorms could cause these features, the UCLA team relied on computer simulations of Titan's hydrological cycle. 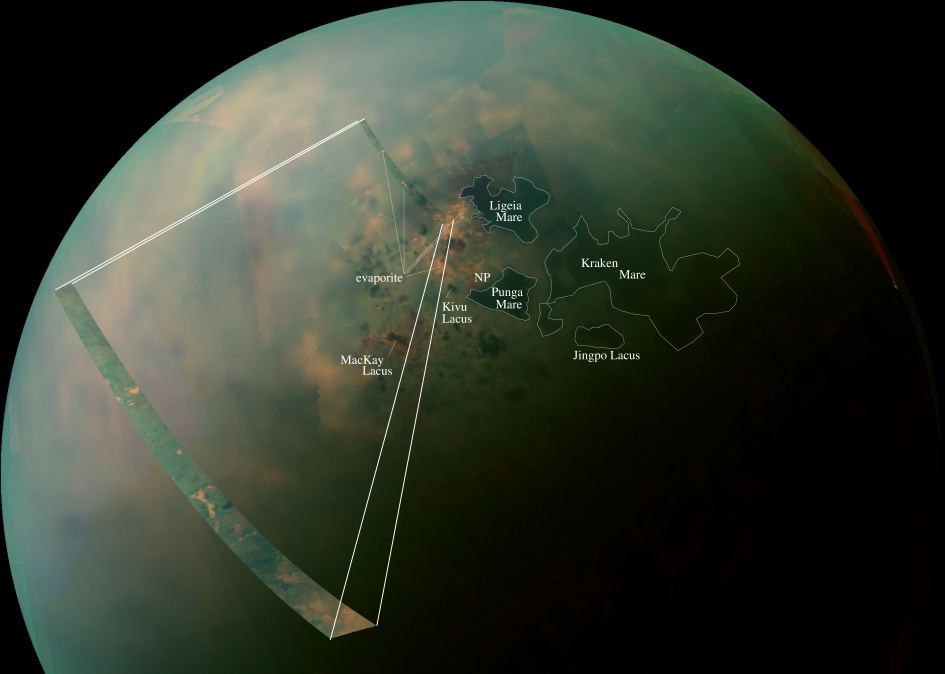 What they found was that while rain mostly accumulates near the poles – where Titan's major lakes and seas are located – the most intense rainstorms occur near 60 degrees latitude.

This corresponds to the region where alluvial fans are most heavily concentrated, and indicates that when Titan does experience rainfall, it is quite extreme – like a seasonal monsoon-like downpour.

As Jonathan Mitchell – a UCLA associate professor of planetary science and a senior author of the study – indicated, this is not dissimilar to some extreme weather events that were recently experienced here on Earth.

"The most intense methane storms in our climate model dump at least a foot of rain a day, which comes close to what we saw in Houston from Hurricane Harvey this summer," he said.

The team also found that on Titan, methane rainstorms are rather rare, occurring less than once per Titan year – which works out to 29 and a half Earth years. But according to Mitchell, who is also the principal investigator of UCLA's Titan climate modeling research group, this is more often than they were expecting. "I would have thought these would be once-a-millennium events, if even that," he said. "So this is quite a surprise."

In the past, climate models of Titan have suggested that liquid methane generally concentrates closer to the poles. But no previous study has investigated how precipitation might cause sediment transport and erosion, or shown how this would account for various features observed on the surface. As a result, this study also suggests that regional variations in surface features could be caused by regional variations in precipitation.

On top of that, this study is an indication that Earth and Titan have even more in common than previously thought. On Earth, contrasts in temperature are what lead to intense seasonal weather events.

In North America, tornadoes occur during the early to late Spring, while blizzards occur during the winter. Meanwhile, temperature variations in the Atlantic ocean are what lead to hurricanes forming between the summer and fall.

Similarly, it appears that on Titan, serious variations in temperature and moisture are what triggers extreme weather. When cooler, wetter air from the higher latitudes interacts with warmer, drier air from the lower latitudes, intense rainstorms result.

These findings are also significant when it comes to other bodies in our Solar System that have alluvial fans on them – such as Mars.

In the end, understanding the relationship between precipitation and planetary surfaces could lead to new insights about the impact climate change has on Earth and the other planets.

Such knowledge would also go a long way towards helping us mitigate the effects it is having here on Earth, where the changes are only unnatural, but also sudden and very hazardous.

And who knows? Someday, it could even help us to alter the environments on other planets and bodies, thus making them more suitable for long-term human settlement (AKA terraforming)!