The Yellowstone Supervolcano Is a Disaster Waiting to Happen

Yellowstone has been a national park since 1872, but it was only in the 1960s that scientists realized the scale of the volcano — it's 44 miles across — and not until the 1980s did they grasp that this thing is fully alive and still threatens to erupt catastrophically.

Yellowstone is capable of eruptions thousands of times more violent than the Mount St. Helens eruption of 1980. The northern Rockies would be buried in multiple feet of ash. Ash would rain on almost everyone in the United States. It'd be a bad day. Thus geologists are eager to understand what, exactly, is happening below all those volcano-fueled hot springs and geysers.

Obviously they would like to know if and when Yellowstone will blow again, and with what level of explosiveness. A major eruption would be a low-probability, high-consequence event, a proverbial Black Swan, something that could have societal and planetary effects. The problem for scientists is that these big " supervolcano" eruptions rarely happen, and the most important action is out of sight, many miles below the surface, involving chaotic forces, complex chemistry and enigmatic geological features.

One new study has offered insight on Yellowstone's hidden architecture. It modeled the way magma rises from deep in Earth's interior and creates two large chambers of partially melted rock beneath the surface of the national park.

These two magma chambers are stacked, and they are separated by a layer (called a "sill," like a window sill) of non-melted rock. The magma rising from Earth's mantle flows easily and doesn't hold much gas. It cools and solidifies as it collides with relatively cold crust, forming the sill, the top of which is about six miles below the surface.

On top of the sill is the upper magma chamber, with thick, sticky magma that holds a great deal of gas — which makes the magma in the upper chamber explosive. It's like an unopened can of soda that has been shaken. Open the can at your peril.

The new study, published in Geophysical Research Letters, explains how this two-tiered, geochemically diverse architecture might have come about over the course of time.

"Someday we might have a model snapshot saying this is what the system looks like when there's enough melt for there to be a large eruption," lead author Dylan Colón, an earth sciences doctoral candidate at the University of Oregon, told The Washington Post.

The study won praise from Michael Poland, scientist-in-charge at the U.S. Geological Survey's Yellowstone Volcano Observatory: "What's neat about their model is they can go back in time with it and see how it might have influenced eruption rates many millions of years ago."

The new study bolsters earlier research on the dual magma chambers. It used sensors arrayed around Yellowstone to record the speed at which seismic waves from small earthquakes pass through the subsurface rock. Such waves move more slowly through hot and/or partially melted rock formations. That data gave scientists the equivalent of an MRI showing the two magma chambers. 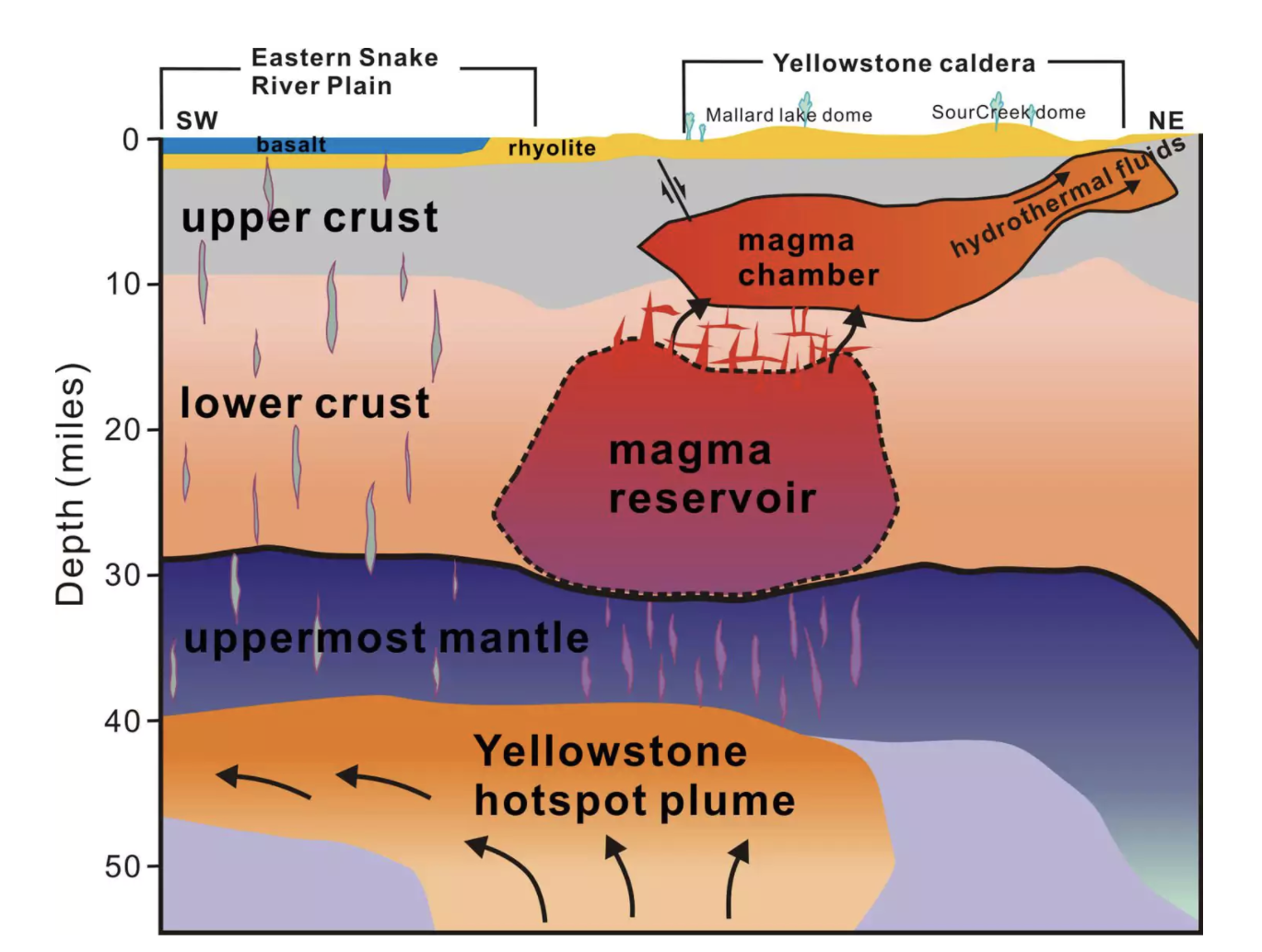 "Supervolcano," we should note, is not a technical term. The experts refer to Yellowstone as a "caldera" or a "caldera-forming volcano." Some volcanoes form conical mountains. A caldera is a volcano that creates a vast crater. These are mountain-swallowing events. Visitors to Yellowstone are given a map showing the outline of the most recent caldera, and if they go to the right vantage point, it's possible to see that the heart of the park is remarkably free of mountains. They were either blown away or fell into the big hole.

The Yellowstone region has seen three big eruptions, the first one 2.1 million years ago, the most recent 630,000 years ago. Contrary to Internet rumor-mongering, as well as conspiracy theories about government coverups, there's no sign that a fourth cataclysmic event is about to happen.

It's possible, in fact, that Yellowstone is getting a bit old and tired. It may be ready for a long nap rather than a major eruption.

Ilya Bindeman, a University of Oregon geochemist and co-author of the new paper, said that Yellowstone may be "approaching the end of its evolution" because so much of the material in the upper magma chamber is recycled and re-melted after previous eruptions.

As Poland said: "How many times do you want to reheat your leftovers? At some point you're going to say, 'I'm not going to reheat his.' You've microwaved it six times, and it's no longer food."

Intellectual humility is called for here: No one can say with great confidence how much magma it takes to trigger a caldera-forming eruption. Moreover, relatively small eruptions creating lava flows can happen within the Yellowstone system. The most recent was 70,000 years ago. The experts say one of these smaller eruptions is much more likely than a giant explosion. Speculation that Yellowstone is "due" to erupt catastrophically implies that the volcano behaves predictably, like a machine. Geologists know otherwise.

Yellowstone, it should be noted, isn't the only caldera in the United States. One of the others that's worth keeping an eye on — and the U.S. Geological Survey does just that — is the Long Valley caldera in California, near the popular ski resort of Mammoth Mountain, just east of Yosemite National Park. It erupted 700,000 years ago. A major eruption is extremely unlikely, but it could produce smaller eruptions that would be highly disruptive and dangerous, said Margaret Mangan, scientist-in-charge at the USGS California Volcano Observatory.

Mangan said there are seven volcanic regions in California with zones of molten rock beneath the surface. A volcanic eruption in California is roughly as likely as a magnitude 6 or greater earthquake on the San Andreas Fault, she said.

But Californians don't worry about volcanoes. They worry about earthquakes, tsunamis and wildfires, she said. She has tried to raise public awareness of volcano hazards but says that it is hard to get much attention.

"The awareness level and preparedness level is quite low in this state," she said. "We prepare for those large earthquake events, and we need to prepare for volcanic eruptions."