Science fiction introduces us to elaborate, futuristic worlds that often sound like nothing more than a dream.

But humanity has made incredible technological advancements over the past 100 years, and many of the ideas predicted in science fiction have now become reality.

Some predictions, like self-driving cars, are still in the early stages, but scientists and engineers have reached many other milestones first described in fiction, such as bringing people to the moon.

Take a look at 15 wild fictional predictions that have come true.

1. In 1865, author Jules Verne released From Earth to the Moon, which described three Americans' mission to launch a spacecraft and land on the moon. Parts of the novel were similar to the first real moon landing, which occurred 104 years later. 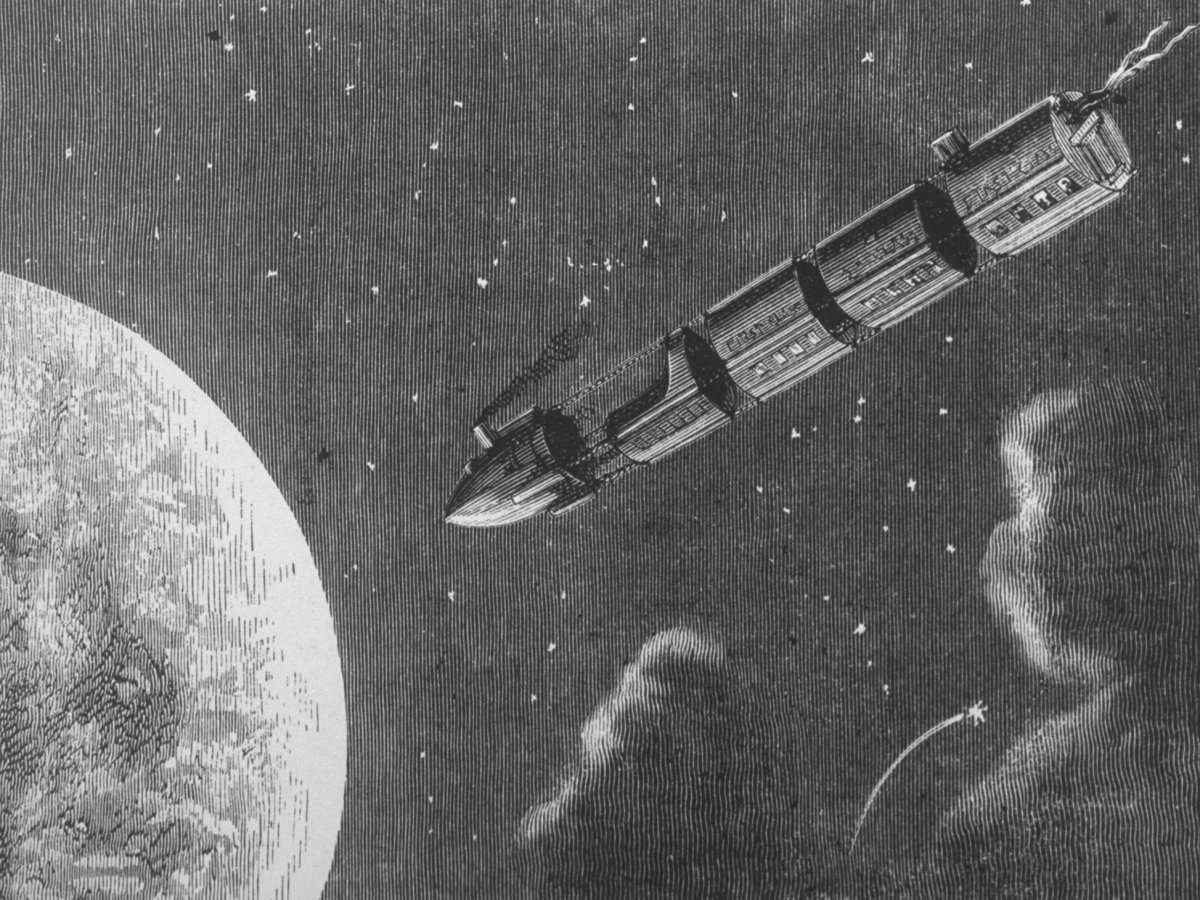 Both the NASA astronauts and Verne's characters launched from Florida. NASA's command module was named Columbia in another similarity to Verne's fictional spacecraft, the Columbiad.

NASA astronauts Neil Armstrong and Edwin "Buzz" Aldrin succeeded in walking on the lunar surface in 1969 while Michael Collins remained in the spacecraft. The three men in Verne's novel, however, never stepped foot on the moon.

NASA has acknowledged other similarities between Apollo 11 and Verne's novel as well. For example, the space agency said the Columbiad's shape and size closely resembled the Apollo spacecraft.

The novel also claimed a telescope would be able to see the Columbiad mission's progress. When an explosion caused a malfunction during the Apollo 13 mission in 1970, a telescope at Johnson Space Center was able to see the accident, which took place more than 200,000 miles away (300,000 kilometres). 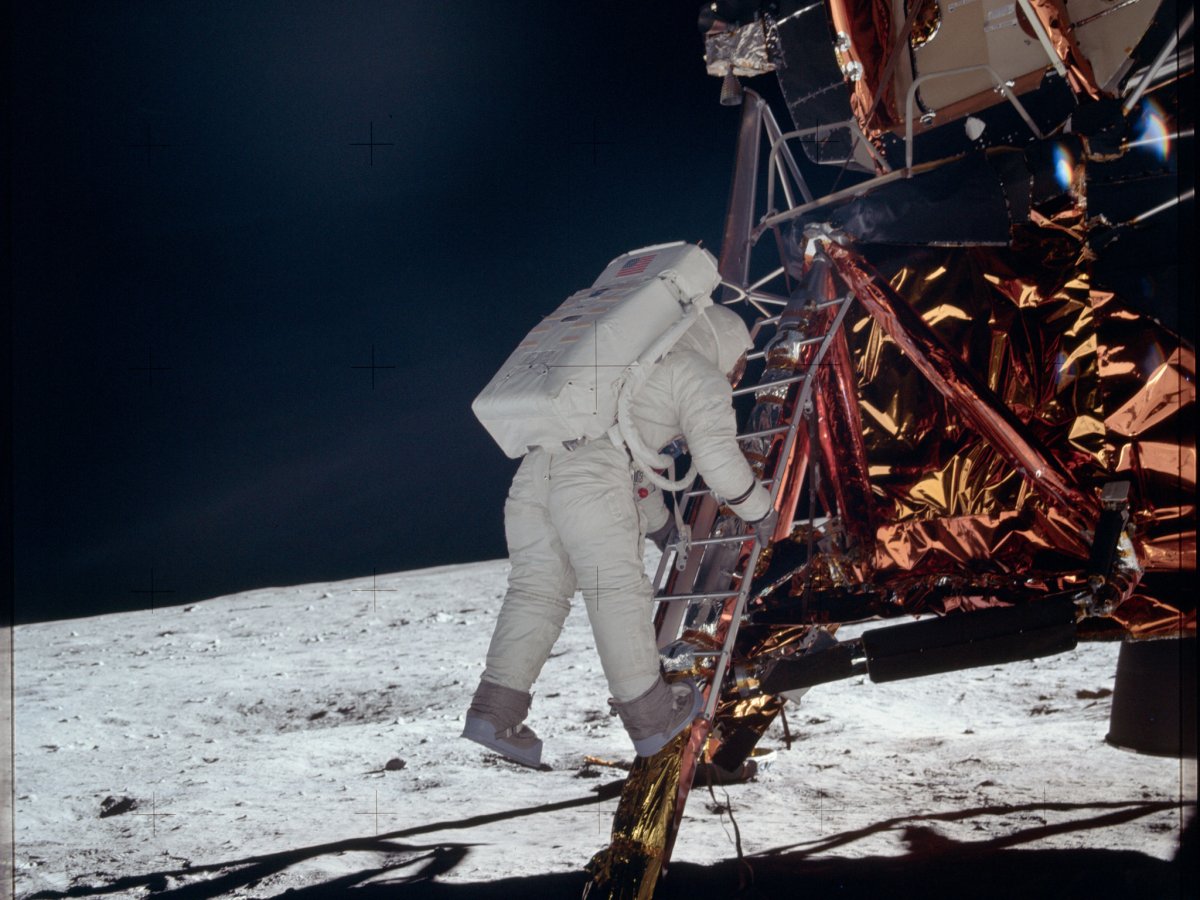 2. The iconic Communicator device on "Star Trek," first shown in 1966, looked a lot like a flip phone. Though engineers were working on developing this technology in the 1960s, it took Motorola until 1973 to debut the world's first mobile phone.

Ten years later, in 1983, Motorola's cell phones hit the market. The devices were large, heavy, and expensive, but Motorola continued to make improvements for the next several years. The company's first flip phone, released in 1989, was similar to the "Star Trek" device.

In recent years, The Wand Company has created a modern replica of the Communicator. The device, which debuted in 2015, is made from aluminium and includes a magnetic stand for wireless charging. It also has Bluetooth functionality and stores some voice recordings from "Star Trek" episodes.

3. 3D holograms have been featured in sci-fi for decades. In 2017, an Australian company claimed it has managed to produce a hologram table that resembles the futuristic holograms from the original "Star Wars" movie.

Princess Leia called for Luke Skywalker's help using a holographic message in the 1977 "Star Wars" movie. Since then, scientists have worked on turning this technology into reality.

Euclideon, an Australian company, says it has made the first multi-user hologram table in the world. As many as four people can interact with the hologram at once using motion-tracking glasses.

Though Euclideon's invention has been met with some scepticism, but New Atlas reported in November 2018 that the company is moving forward with bringing the hologram technology to market.

4. "Star Trek" featured replicators that could 3D print food and everyday objects in a few seconds. Scientists are now using 3D printing technology to make objects out of plastic, metal, and glass, though the process is not nearly as fast.

The New York-based nonprofit Mattershift says it has developed carbon nanotube membranes that could separate and put together individual molecules.

Forbes reported that Mattershift CEO Rob McGinnis says the membranes could help scientists make anything out of a set of basic molecular building blocks.

"We're talking about printing matter from the air," McGinnis said, according to Forbes. "Imagine having one of these devices with you on Mars. You could print food, fuels, building materials, and medicines from the atmosphere and soil or recycled parts without having to transport them from Earth."

5. The Iron Man suit has become legendary since first appearing in Marvel Comics. People won't be flying around in suits anytime soon, but the US military is developing high-tech suits that will mirror some of Iron Man's capabilities.

TALOS will take in huge amounts of data from drones, naval sensors, and reconnaissance aircraft to better inform soldiers,Military Times reported. The suit is expected to be light and include life support systems that will track soldiers' vitals.

3D sound pickups built into the suit will also help soldiers figure out where incoming fire and vehicles are coming from.

According to Military Times, the US could begin testing the high-tech suit as early as summer 2019.

6. Verne's Twenty Thousand Leagues Under the Sea, which was published in 1870, featured a submarine fully powered by electricity. At the time, only mechanically powered submarines were in use.

The French submarine "Gymnote," which was created in 1888 and ran on electric power, was more similar to Verne's Nautilus than the submarines that preceded the novel's publication.

Rosalind Williams, a historian of technology at MIT, told National Geographic that Nautilus is not that different from modern submarines, such as a 1960s vessel called Alvin that ran on lead-acid batteries. 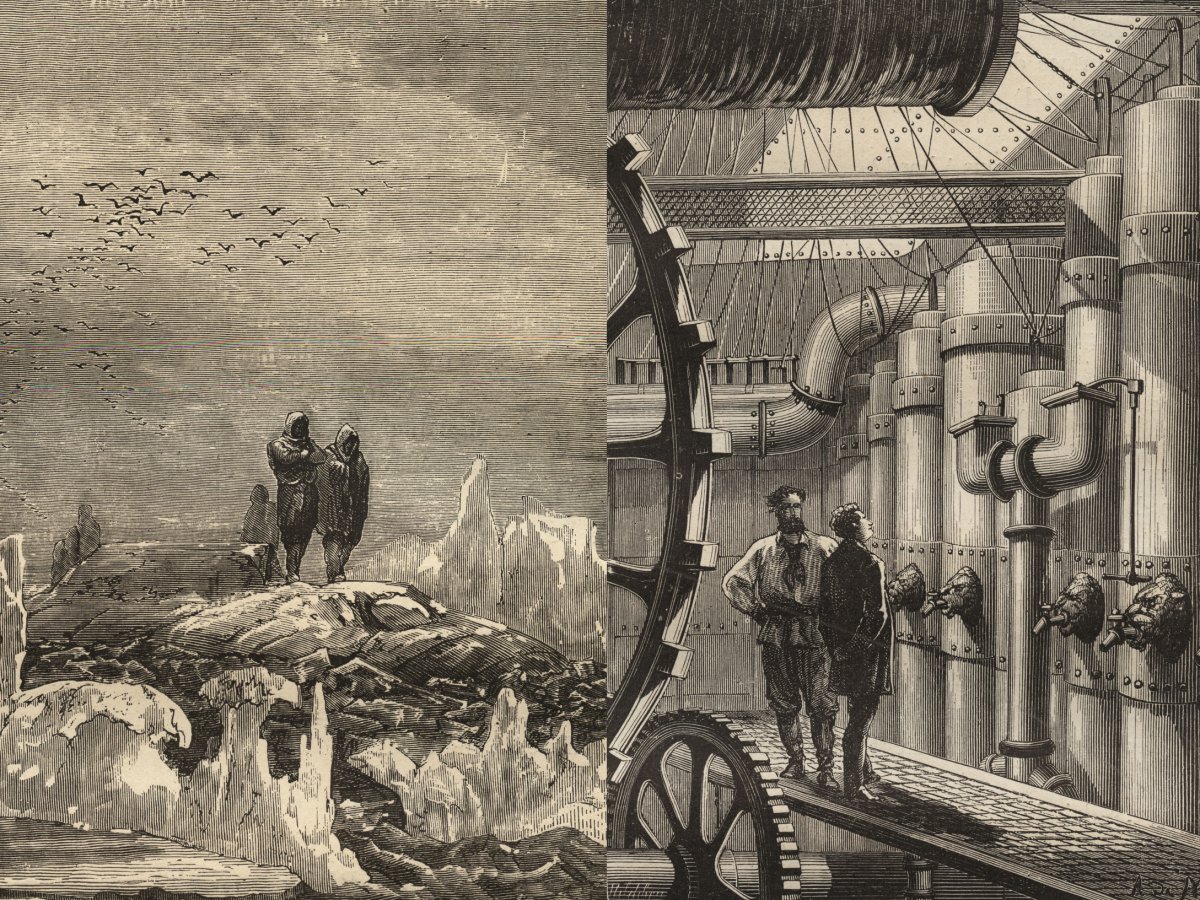 7. Verne also predicted that people would one day listen to news instead of just reading the newspaper. He made the prediction in 1889, but the first radio broadcast didn't occur until the 1920s.

"Instead of being printed, the Earth Chronicle is every morning spoken to subscribers, who, from interesting conversations with reporters, statesmen and scientists, learn the news of the day," Verne wrote in the 1889 short story In the Year 2889.

After the first radio broadcast, nearly 30 more years passed before the first television newscast aired. Since then, Americans have been able to watch many significant moments on TV, including President Richard Nixon's resignation speech.

Almost everyone in Brave New World took Soma, which erased feelings of unhappiness.

In the real world, the first link between depression and chemicals in the brain was established during 1951.

A group of doctors on Staten Island in New York City observed sudden changes in the moods and behaviours of tuberculosis patients after the patients took a drug called iproniazid. The lethargic patients quickly became happy.

Three years later in North Carolina, some people experienced the opposite effects after being prescribed the drug Raudixin for blood pressure control. One patient attempted suicide after taking Raudixin, The New York Times reported.

As scientists came to better understood the connection between chemicals in the brain and depression, they discovered new drugs to help people.

Since then, millions of Americans have turned to antidepressants. Prozac was approved by the Food and Drug Administration in 1988 and became the third-most-common prescription drug in the US by 2008, according to The New York Times.

9. The World Set Free, a 1914 novel by H.G. Wells, mentions a hand grenade of uranium that "would continue to explode indefinitely". Three decades later, the US detonated two nuclear bombs in Japan, hitting Hiroshima and Nagasaki.

Wells' description of an atomic bomb even said the weapon would be dropped from a plane.

The author was aware of how devastating a nuclear weapon could be. In The World Set Free, atomic bombs contribute to a destructive war whose survivors create a global government to preserve unity and prevent future devastation.

"They exploded continually, for days, weeks or months depending upon their size, as the elements in them furiously radiated energy during their degeneration and in the process created mini-volcanoes of death and destruction," Smithsonian wrote.

10. The Jetsons in 1962 featured a high-tech watch that could stream videos in colour. While modern smartwatches don't have this feature, the Jetsons watch had a similar design to what we see today.

Elroy Jetson used his watch to watch The Flintstones and communicate with his family.

Today's smartwatches, such as the Apple Watch, don't have the same video capability, but people use the devices to make phone calls, look at photos, and more.

A few other moments from The Jetsons reflect inventions that came after the show premiered. As Entrepreneur reported, the show accurately predicted drones and holograms. 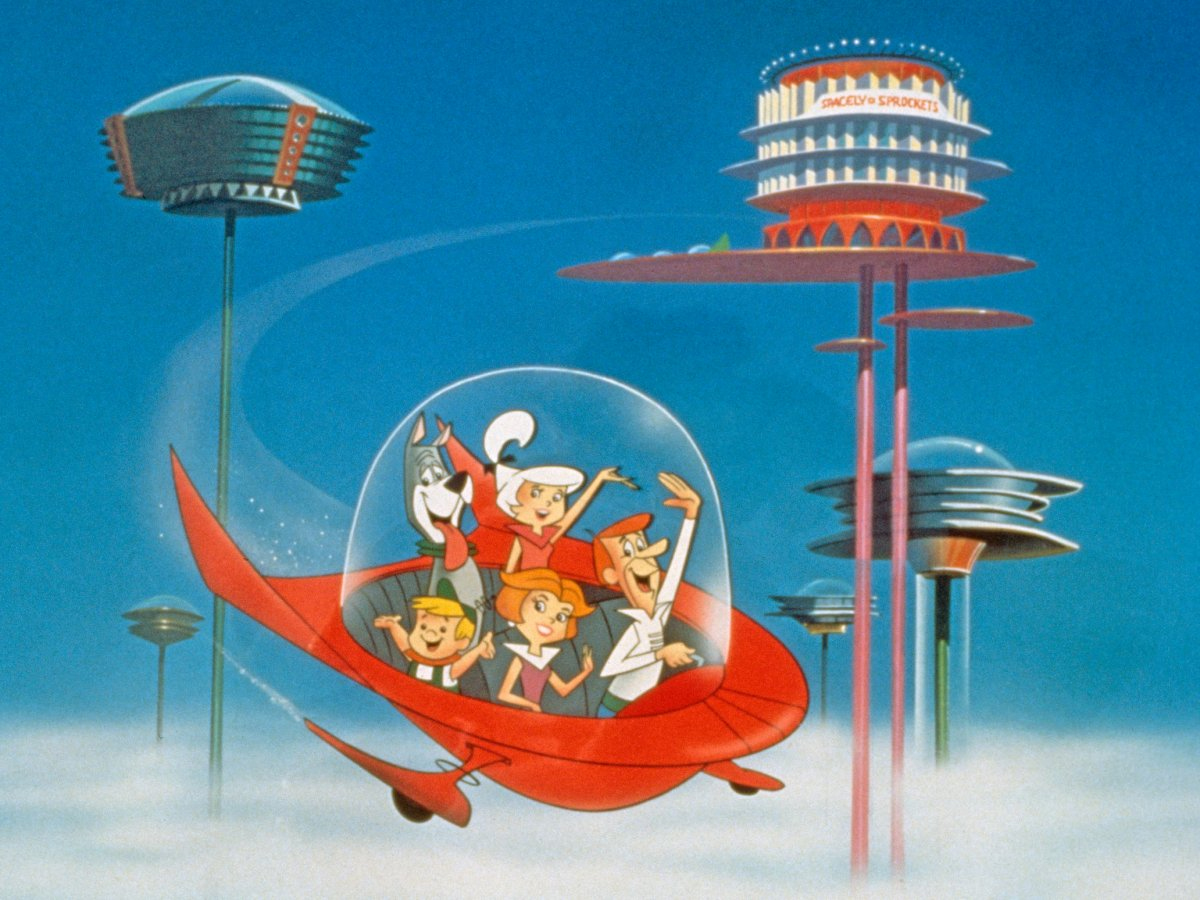 11. Nuclear physicist Jack Cover completed the first Taser stun gun in the 1970s. He named the Taser after a 1911 novel called Thomas A. Swift's Electric Rifle, which features a similar device to the ones used today.

Cover wanted to create the Taser after a series of aeroplane hijackings in the 1960s prompted air marshals to bring guns on planes. The Los Angeles Times reported that Cover was trying to develop a weapon that would help air marshals stop hijacking attempts without harming passengers or the aircraft.

The use of Tasers has sparked controversy in recent years because stun guns have been linked to overuse and instances of cardiac arrest.

12. Video calling is most often done through platforms like Skype and FaceTime these days, though the method has been featured in movies for decades. One of the earliest references, the 1927 film Metropolis, showed an analogue videophone mounted on the wall.

As designer Joe Malia wrote in a blog post, a character in Metropolis relied on four different dials to find the right frequency before making a call.

The depictions of video calls became increasingly more sophisticated in movies over time. In the 1968 movie 2001: A Space Odyssey, for example, video calls were made by entering a number into a type-pad attached to a large phone unit.

By 1989, Back to the Future Part II featured a video calling system with a caller's personal information, such as favourite drinks and hobbies, displayed.

13. The first use of the term "credit card" goes back to Edward Bellamy's 1887 novel, Looking Backward. The use of credit cards in the US originated in the 1920s.

In Looking Backward, the main character falls asleep in 1887 and wakes up 113 years later to learn that his home has turned into a socialist utopia.

At the time, imagining that someone could just swipe their card to pay for an item and get a receipt for the transaction was considered science fiction. But Bellamy got a lot of things right, even predicting that it would be easy to use one's credit card in another country.

The first universal credit card – one that could be used at a wide range of places – became available in 1950, and it took several more years before credit cards became an integral part of American society.

14. In the 1953 novel Fahrenheit 451, author Ray Bradbury wrote about "seashells" and "thimble radios" that resemble earbuds and headsets with bluetooth capability. Millions of Americans today listen to songs and take phone calls with Apple's wireless AirPods.

Bradbury described the Seashells as capable of producing "an electronic ocean of sound, of music and talk and music and talk, coming in on the shore of [your] unsleeping mind," according to The New York Times.

Fahrenheit 451 made references to other innovations that have since become common. For example, the novel described people communicating with friends through a digital wall, which bears some similarity to the sharing of messages on platforms like Facebook.

15. Science-fiction author Isaac Asimov predicted the rise of cars with "robot-brains" after visiting the World's Fair in 1964. More than 50 years later, Waymo and other companies are testing self-driving cars.

In a New York Times essay, Asimov imagined visiting a World's Fair 50 years in the future.

"Much effort will be put into the designing of vehicles with 'robot-brains' – vehicles that can be set for particular destinations and that will then proceed there without interference by the slow reflexes of a human driver," Asimov wrote.

Driverless cars are still being tested, but their proponents say this technology could help alleviate congestion and reduce crashes.

Many companies are aiming to get their autonomous vehicles on the road before 2030, Business Insider previously reported.