This Is How Many People You'd Need to Colonize Mars, According to Science

So you want to colonize Mars, huh? Well Mars is a long ways away, and in order for a colony to function that far from Earthly support, things have to be thought out very carefully. Including how many people are needed to make it work.

A new study pegs the minimum number of settlers at 110.

The new study is titled "Minimum Number of Settlers for Survival on Another Planet." The author is Jean-Marc Salotti, a Professor at Bordeaux Institut National Polytechnique. His paper is published in Scientific Reports.

Obviously, there's a lot to think about when it comes to having any kind of sustained presence on another planet. How will people organize themselves? What equipment will they bring? How will they extract in-situ resources? What kind of skills are needed?

These questions have been addressed before, of course, and in this report Salotti says that: "The use of in situ resources and different social organizations have been proposed, but there is still a poor understanding of the problem's variables."

This study mostly focuses on one question: how many people will it take? Salotti writes: "I show here that a mathematical model can be used to determine the minimum number of settlers and the way of life for survival on another planet, using Mars as the example.

A lot of thought has gone into colonizing Mars. SpaceX says their proposed interplanetary spacecraft could carry 100 people to Mars. Elon Musk has talked about building a fleet of them, so that there's a constant flow of resources to Mars. But is that realistic? 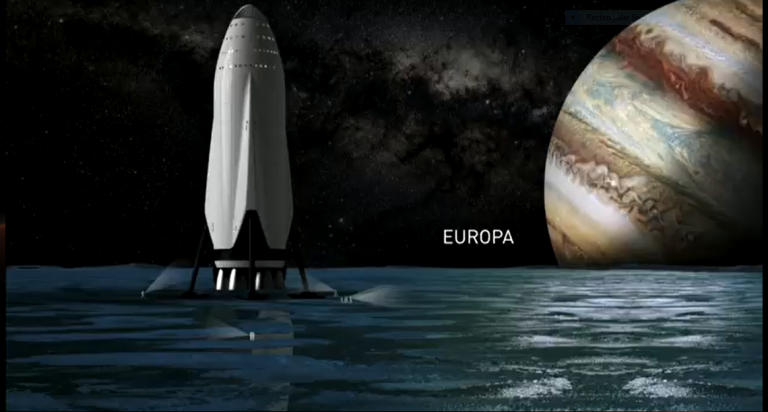 "However," Salotti writes, "this is an optimistic estimate of the capability, the feasibility of the reusability remains uncertain and the qualification of the vehicle for landing on Mars and relaunch from Mars could be very difficult and take several decades."

A similar dynamic hovers over other parts of the Mars colony discussion. Many researchers have thought about in-situ resource utilization, for instance.

Gases could be extracted from the atmosphere, and minerals from the soil. In-situ resource extraction could provide organic compounds, iron, and even glass.

Even if we grant the feasibility of these ideas, "the complexity of the implementation is poorly understood and the number of items that would remain to be sent each year would still represent a tremendous challenge," writes Salotti.

The problem of a colony is bewilderingly complex. 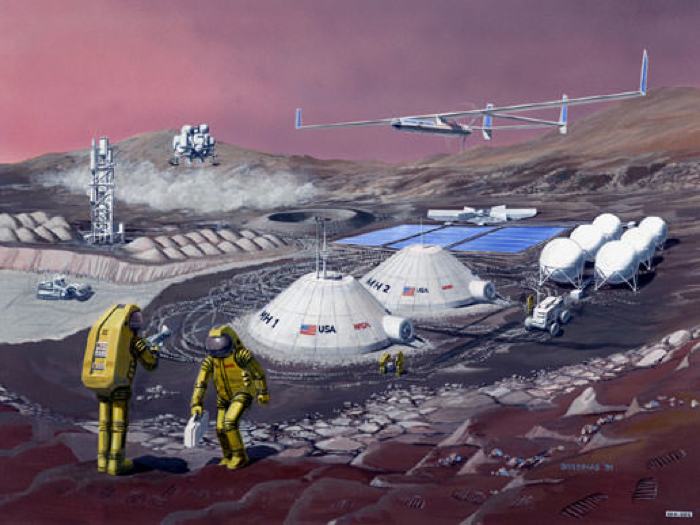 Salotti worked on a mathematical model that he thinks could serve as a good starting point for thinking about a self-sustaining colony.

Central to his idea is what he calls the sharing factor, "which allows some reduction of time requirements per individual if, for example, the activity concerns the construction of an object that can be shared by several individuals."

The complexity, expense, and feasibility of interplanetary travel is one. And the lifetime of the equipment that settlers start with is another. Every piece of equipment has a lifetime.

"For the sake of simplicity," Salotti writes, "it is assumed here that the initial amount of resources and tools sent from Earth will be rather limited and as a consequence will not have much impact on survival." In essence, building a model that relies on easy re-supply from Earth wouldn't be that helpful.

So, granting that the initial state of the colony is viable, Salotti moves on to two variables which will have a huge effect on survival:

What Salotti is working up to here is an equation. Things like resource availability and production capacity are variables in that equation.

But Salotti's idea always circles back to the concept of the "sharing factor."

Imagine an isolated individual in a colonizing situation on Mars. They would have to perform all task themselves. They would need to build and/or maintain their own systems to acquire drinking water, oxygen, and to generate power. There wouldn't be enough time in each day. The burden on a single person would be enormous.

But in a larger colony, their technology for things like getting drinking water, oxygen, and for generating power is used by more people. That creates more demand, but it also spreads out the burden.

The effort it takes to build and maintain all those systems is now spread out among more people. That, in essence, is Salotti's sharing factor.

As the number of people increases, there's room for more specialization. Imagine a colony of only 10 people. How many of them would need to be able to repair and maintain the drinking water system? Or the oxygen system?

Those systems cannot be allowed to fail, so there would be pressure for a large percent of those people to be able to operate and understand those systems. 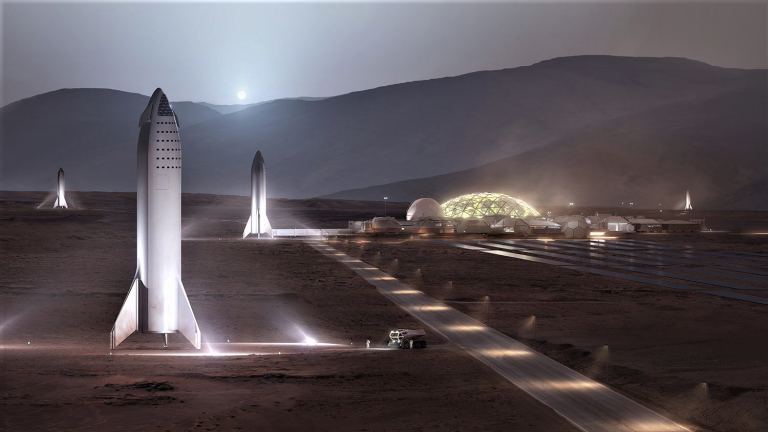 Salotti writes: "If each settler was completely isolated and no sharing was possible, each individual would have to perform all activities and the total time requirement would be obtained by a multiplication by the number of individuals."

But if there are one hundred people, how many people need to understand those systems? Not everyone. So that allows others to specialize in something else.

"A greater number of individuals makes it possible to be more efficient through specialization and to implement other industries allowing the use of more efficient tools."

Salotti argues that this sharing factor can be calculated, and estimated with different mathematical functions. Math-interested people can check that part of the paper out for themselves. 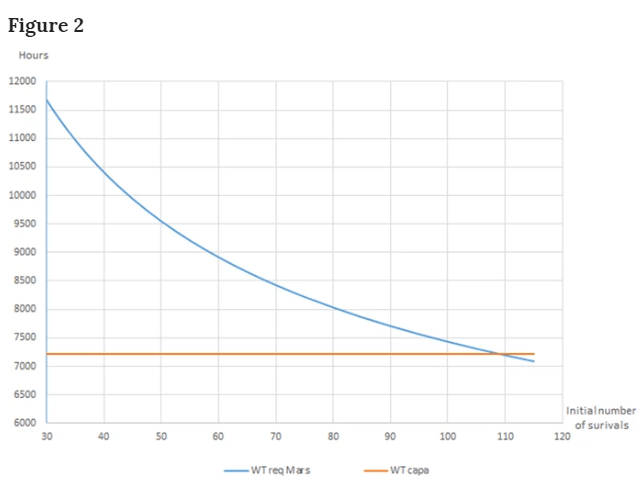 There are some constraints and starting points for the sharing factor, of course. "The sharing factor depends on the needs, the processes, the resources and environmental conditions, which may be different depending on the planet," Salotti writes.

This leads us to Salotti's description of "survival domains." Salotti outlines five domains that need to be considered in these calculations:

These are mostly self-explanatory, but human factors refers to things like raising and education children, and some amount of cultural activities like sports, games, perhaps music. The five survival domains that need to be considered. (Salotti, Scientific Reports, 2020)

Now Salotti turns to Mars, the primary planet when it comes to this kind of futuristic figuring, and the planet that Salotti addresses in his paper.

Salotti doesn't start from scratch when it comes to Mars. There's already been a lot of scientific thinking into building a sustained human presence on that planet.

"The specific utilization of Martian resources for life support, agriculture and industrial production has been studied in different workshops and published in reports and books," Salotti explains.

The basic assumption Salottti uses is that for whatever reason, the flow of supplies from Earth has been interrupted, and the colony must sustain itself.

He borrows a scenario from a contest organized by the Mars Society, where participants were asked to define a realistic scenario for setting Mars.

Basically, Salotti's equation comes down to time. How much time is required for survival vs. how much time is available. For Salotti, the effective number of people required to balance the time equation is 110 on Mars.

"It is based on the comparison between the required working time to fulfil all the needs for survival and the working time capacity of the individuals," he writes in the conclusion.

Naturally work of this nature makes some assumptions, which are spelled out in the paper.

"This is obviously a rough estimate with numerous assumptions and uncertainties," he writes. But that doesn't diminish its usefulness.

If there's ever going to be a human colony on Mars, at some point in the future, then we need to develop working models to guide our thinking and our planning. We have a lot of sci-fi talk, and flowery announcements from people with large Twitter followings, but that's not real work.

"To our knowledge, it is nevertheless the first quantitative assessment of the minimum number of individuals for survival based on engineering constraints," Salotti says.

"Our method allows simple comparisons, opening the debate for the best strategy for survival and the best place to succeed," he concludes.