This Is The TRUE Size of Africa

Our most common atlases are distorting the relative size of countries around the world, so German software and graphics designer, Kai Krause, made this map to set the record straight. (Scroll down for a more detailed, zoomable version.)

"Africa is so mind-numbingly immense, that it exceeds the common assumptions by just about anyone I ever met," he writes at his website. "It contains the entirety of the US, all of China, India, as well as Japan and pretty much all of Europe as well - all combined!"

It was displayed a few years back in a London gallery as part of a Royal Geographic Society exhibition, for which the curator wanted contributions of “unusual maps”. While Krause says this is a purely symbolic image, made to illustrate just how big Africa is without the very common map distortion known as the Mercator projection.

The Mercator projection is a cylindrical map projection invented by pioneering Flemish geographer and cartographer, Gerardus Mercator, in 1569. And now, centuries later, it's still being used as the standard map projection for nautical travellers because it can be used to determine a 'true' direction.

Any of the straight lines on the map are a line of constant true bearing, so all a navigator needs is one of these maps and a compass to plot a straight course across the ocean. The meridians are drawn as equally spaced, parallel vertical lines, as are the lines of latitude, but horizontally. The further away from the Equator they are, the further away they're spaced apart in the map. This means that landmasses that are located far away from the Equator look disproportionately huge compared to their Equator-hugging neighbours.

And, as Krause points out on his website, this type of map is ubiquitous in traditional geography education. We see the Mercator projection as the background in our daily television news, and the covers of school atlases. "But the basic fact is that a three-dimensional sphere being shown as a single two-dimensional flat image will always be subject to a conversion loss: something has to give…" he says. "That ability to use lines instead of curves came at a cost: areas near the poles would be greatly exaggerated. Greenland looks deceivingly as if it were the size of all of South America for instance…"

In fact, thanks to the Mercator projection, the size of Africa is often hugely underestimated, says Krause, off by factor of two or three.

So here is the true size of Africa, distortion-free. Click here for a larger, zoomable version, courtesy of The Economist. 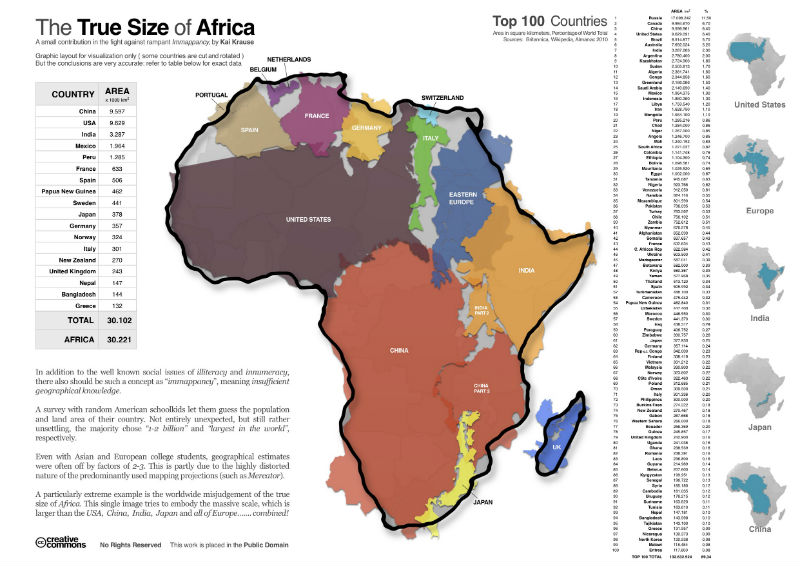 Image by Kai Krause, courtesy of The Economist

Edit: Kai Krause has contacted us to let us know that the previous headline image we used was a variation on Krause's work by the folks at The Economist. We have updated the image to be Krause's work only.