Sometimes you need to take a step back to really appreciate the size of something, and this NASA shot of polluted fog enveloping the east coast of China is about as dramatic as it gets. Levels of pollution have risen to particularly dangerous levels in recent weeks, with the government forced to issue an orange alert: that's the second-highest level out of four.

Smog levels in the capital Beijing have just hit 20 times more than the designated 'safe' level set down by the World Health Organisation (WHO). It's worse than it's been all year, with people forced to stay indoors, construction work halted, and factories shut down while the authorities wait for the haze to lift.

According to NASA, many of the particles in the polluted air are sulphate aerosols released as a result of burning coal - and coal accounts for two-thirds of China's energy supply. As well as releasing carbon dioxide, coal fires emit sulphur dioxide, which can create sulphuric acid when mixed with water vapour in the air. Unusually low temperatures in China for this time of year are exacerbating the problem, with citizens switching on heating systems or even lighting coal fires themselves.

The picture, which you can see in full below, was taken on November 30 by a Visible Infrared Imaging Radiometer Suite (VIIRS) on board NASA's Suomi NPP satellite. "The image shows extensive haze, low clouds, and fog over the region," says NASA. "The brightest areas are clouds or fog, which have tinges of gray or yellow because of the air pollution. Other cloud-free areas have a pall of gray haze that mostly blots out the cities below. In areas where the ground is visible, some of the landscape is covered with snow."

On the same day the picture was taken, the air level quality index that measures dangerous particles in the air hit 666 in Beijing. To give you some context, in the US, anything above 300 is considered capable of causing the entire population serious health problems. The US scale actually tops out at 500.

Of course, China's pollution problem isn't helped by the manufacturing demands placed on it by the western world. But this dangerously polluted fog does have one benefit: the sulphates it contains are able to reflect solar radiation to ever-so-slightly stem global warming. So while the haze is bad for human beings, it's actually pretty good at cancelling out some of the warming effects of greenhouse gases. 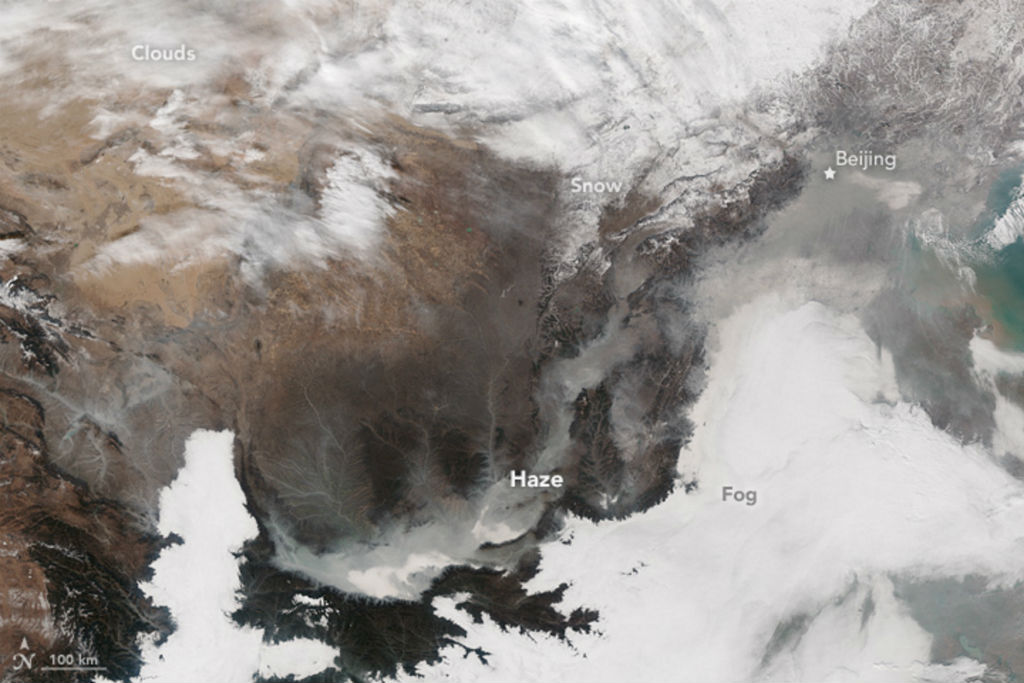