One of the shafts containing the statue of Osiris. Credit: Paolo Bondielli / Min Project
NEWS

Tombs of Osiris, God of The Dead, And Unknown Queen Unearthed in Egypt

Working in the Theban Necropolis - a vast conglomerate of ancient tombs and mortuary temples that faced the ancient Egyptian city Thebes (modern Luxor) - archaeologists have uncovered an ancient tomb on the west bank of the Nile, made in the likeness of the the mythical Tomb of Osiris.

The tomb was found in Abydos, one of the oldest cities of Egypt, in the necropolis of Sheikh Abd el-Qurna, which contains the largest concentration of private tombs in the Theban Necropolis complex. This is where all of the highest ranking officials, priests and nobility were buried during the New Kingdom of Egypt - a period of history that spanned the 16th century BC right up to the 11th century BC, ruled by the 18th, 19th and 20th Dynasties of Egypt.

Part of the tomb was discovered by Philippe Virey back in 1887 but it was never described or published. So a team of Spanish and Italian archaeologists led by María Milagros Álvarez Sosa of the Min Project have set themselves the task of excavating its many chambers and shafts this year. From what they’ve discovered so far, they report that the tomb has been modelled on descriptions of the enormous Tomb of Osiris, an important component of ancient Egyptian legend.

According to April Holloway at Ancient Origins, the archaeologists believe the tomb dates back to either the 25th dynasty of Egypt (760 - 656 BC) or the 26th dynasty (672 - 525 BC), "based on a comparison to similar tombs that contain Osireon elements”. The most famous example is the tomb of Orisis, called the Osireon, built into Seti I's own funeral complex.

Osiris is the ancient Egyptian god of the dead, the afterlife, and the underworld. He was usually depicted as having bright, emerald-green skin, a pharaoh’s beard, a crown adorned by two resplendent ostrich feathers and his legs wrapped up like a mummy. He typically holds a crook and flail - symbolic attributes that referred to kingship and the land, respectively.

Legend of Osiris was played out annually by the ancient Egyptians as a Passion Play, which recounts his death and rebirth. It was believed that he drowned in the Nile, and in some versions, was cut into 14 pieces by his brother Set, the ancient Egyptian god of storms, disorder, violence, and foreigners. The pieces were put back together by Isis, the patroness of nature and magic, over a 12-day period, except for his phallus, which was lost.

Osiris’s body was transported to his tomb by boat while Isis fashioned a replacement phallus made from gold. Imbued with magic, this object brought Osiris back from the dead long enough to impregnate Isis with a child that would become Horus, the falcon-headed deity associated with king and kingship.

“The symbolism of Osiris is very evident here, since all the elements recalling the mythical Osiris tomb are present,” writes the Luxor Times Magazine blog. “A big staircase of 3.5 metres long with a 4-metre-high ceiling at the bottom leading to the Netherworld and another one leading directly to the Osiris statue, which is therefore at a higher level and ideally isolated on ‘his island’; the Osiris statue itself; the empty corridor surrounding it which symbolises the channel of water; the expected burial chamber below the statue, thus identifying the deceased with Osiris.”

In the funerary room stands carved reliefs of demons holding knives. According to Ancient Origins, Alvarez Sosa says that they were there to protect the body of the dead in the afterlife. 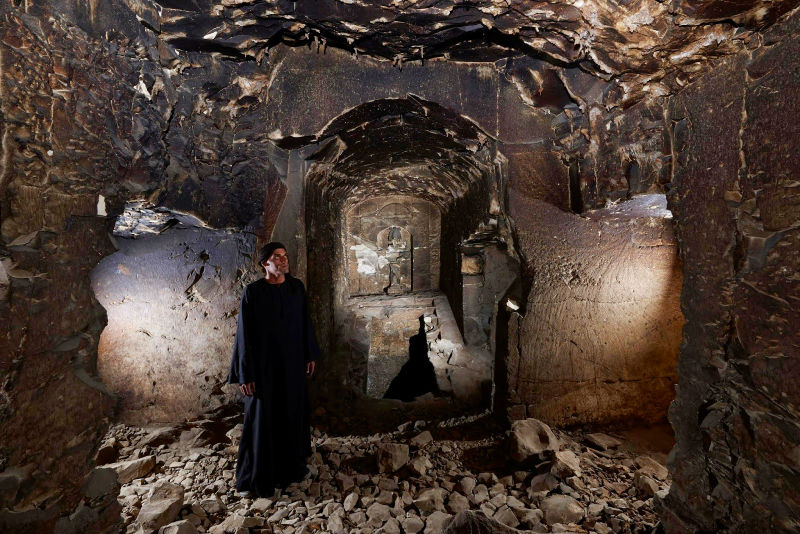 Also announced today, a separate team of archaeologists have discovered the tomb of a previously unknown Egyptian queen, now believed to be the wife of the pharaoh Neferefre, who ruled 4,500 years ago. According to a report by AFP, this tomb was discovered in Abu Sir, which is an extensive necropolis built in the vicinity of the modern Egyptian capital of Cairo. Located here were several pyramids dedicated to pharaohs of the Fifth Dynasty, including Neferefre.

Speaking with the press, Egyptian antiquities minister, Mamdouh al-Damaty, said the queen's name has been identified as Khentakawess III, thanks to inscriptions on the walls of her tomb. Al-Damaty said that for the "first time, we have discovered the name of this queen who had been unknown before the discovery of her tomb".

"This discovery will help us shed light on certain unknown aspects of the Fifth Dynasty, which along with the Fourth Dynasty, witnessed the construction of the first pyramids," he added.