Bloodworms are not for the faint-hearted. These fleshy-looking marine tubes might look harmless from a distance, but don't be deceived.

Bloodworms (aka 'bristle worms' of the genus Glycera) are carnivores that burrow deep into the mud along the seabed, emerging to grasp prey and competitors in their fearsome jaws that are partially composed of copper – and laced with paralyzing venom.

Even scientists who study these creatures for a living do not speak highly of bloodworms.

"These are very disagreeable worms in that they are ill-tempered and easily provoked," says biochemist Herbert Waite from the University of California, Santa Barbara.

"When they encounter another worm, they usually fight using their copper jaws as weapons." 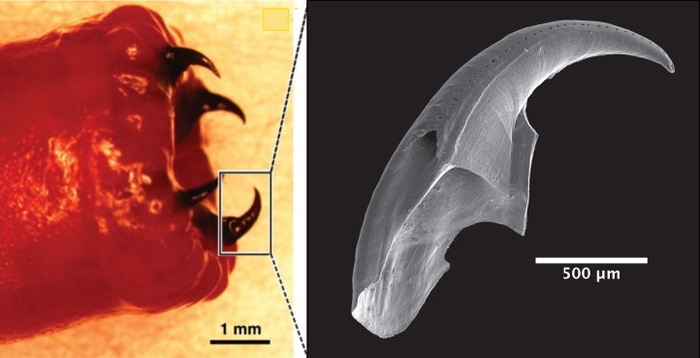 In a new study – led by first author William Wonderly, a graduate student in the Waite Lab – researchers investigated how the bloodworm species Glycera dibranchiata acquires the copper for its jaw, which makes up about 10 percent of the jaw's overall structure, with the rest consisting of protein and melanin.

It's previously been noted that the combination of copper and melanin in bloodworm jaws gives the fangs considerable abrasion resistance, which helps the teeth last for the animal's lifespan of up to around five years.

In the new research, the team dissected bloodworms, analyzed the jaw tissue, and studied cultured cells in vitro, identifying a structural protein that helps these different chemical components come together so successfully.

The protein in question – called multi-tasking protein (MTP) – is so effective, it could help point the way to new material-manufacturing processes, the researchers suggest.

"We never expected protein with such a simple composition, that is, mostly glycine and histidine, to perform this many functions and unrelated activities," says Waite.

"These materials could be road signs for how to make and engineer better consumer materials."

According to the researchers, MTP performs numerous chemical roles in the end-to-end jaw production process.

These include binding copper (which is harvested from marine sediment), catalyzing melanin formation, and acting as an organizer and fabricator, assembling the resulting blend of protein, copper, and melanin that make up the jaws in the bloodworm's proboscis.

It's a formidable trick, the researchers say, and one which would take a lot of work and different equipment to replicate in a laboratory setting, using conventional equipment.

If we can figure out how to replicate it, though – somehow harnessing natural MTP or mimicking similar chemical functionalities – it could be a big step forward in materials science.

"The concerted activities of MTP in the construction of Glycera jaw architecture present a compelling opportunity to rethink the design of processing technologies needed for high-performance and sustainable composite and blended polymeric materials," the researchers write in their paper.

"The combination of chemical simplicity and functional versatility in MTP holds tremendous potential for bio-inspired and natural materials processing."

It's amazing to think that all this ingenuity somehow evolved inside the mouth of a bloodworm. Maybe they're not so bad after all.

"You've got a little worm that's making a jaw that's as hard and stiff as bronze, and some ceramics as well," Waite told New Scientist. "And they're doing this autonomically."