What Is The Deal With This Weird Hole on Mars?

Mars is a pretty wild and wonderful place, and an image posted to the NASA science blog and Astronomy Photo of the Day this week is a brilliant example. It shows what appears to be a mountain... but completely hollowed out.

While it's not actually the product of some strange mining experiment, the formation is indeed hollow. What you're looking at is a lava tube 'skylight', the product of ancient volcanic activity below the surface of Mars.

The feature is on the western slopes of a shield volcano called Pavonis Mons, the surrounding regions of which show some pretty breathtaking geological features. There are long, snaking lava tubes, fault features called grabens, and, of course, the large volcanic crater itself.

The image above was taken by the Mars HiRise orbiter in 2011, and captured the attention of Mars scientists just because it was so unusual. 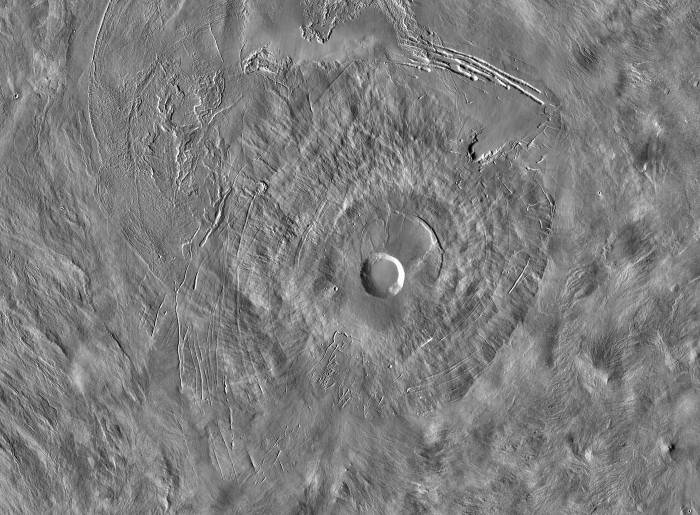 A closer look revealed it to be a skylight - that is, a surface opening to a lava tube below. It's hollow because sometimes lava flows can solidify on the surface while the flow continues below. Then, the flowing lava can drain away, leaving behind lava tube caves.

As time goes by, sections of the roof can collapse, creating the skylight.

Analysis of this skylight revealed the opening to be about 35 metres (115 feet) across. The top of the collapsed rubble pile that you can see through the opening is at a depth of about 28 metres (92 feet).

A digital terrain map allowed scientists to calculate the volume of the material that drained out of the conical feature; this, in turn, placed constraints on how deep the pit could be. Based on these calculations, the rubble pile has to be at least 62 metres (203 feet) tall, which means the pit itself had to be at least 90 metres (295 feet) deep prior to the collapse.

That's much bigger than any lava tube found on Earth.

Lava tube caves like this are exciting because they offer some protection from the harsh radiation that bombards Mars. This means that they could be good sites to establish underground bases (if they are accessible; this particular one doesn't look like it's easy to get in and out of).

But there's another implication, too. If we're going to look for signs of life on Mars, caves might be the best option.

"Holes such as this are of particular interest because their interior caves are relatively protected from the harsh surface of Mars, making them relatively good candidates to contain Martian life," the APOD post explained.

"These pits are therefore prime targets for possible future spacecraft, robots, and even human interplanetary explorers."

Also, while the hole is pretty easy to explain, there is another mystery about this particular skylight.

Here on Earth, lava tube skylights tend to look more like the image above (it's about 6 metres or 20 feet across). Exactly how and why this Martian skylight has a conical crater around it is yet to be discovered.