Why does this waterfall in Antarctica run blood-red?
SCIENCEALERT STAFF    11 SEP 2014 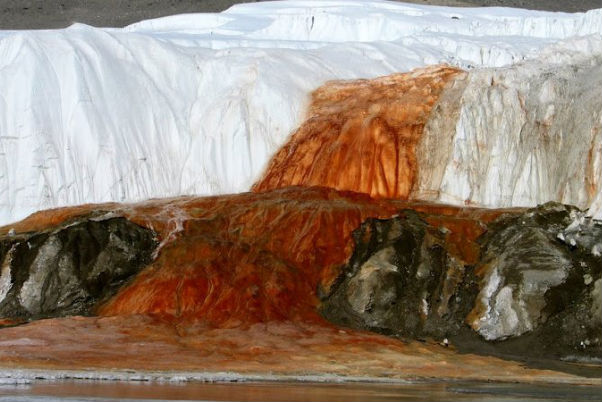 Antarctica's McMurdo Dry Valley is one of the world’s most extreme deserts, and also one of the strangest. Featuring a row of snow-free valleys and the longest river on the continent, the Onyx River, it’s also home to a five-storey-tall waterfall that runs bright red down the side of an enormous glacier.

To discover the reason behind the waterfall’s eerie hue, we have to trace its history back 5 million years, when sea levels rose and flooded East Antarctica. At the same time, a salty lake formed. Over millions of years, ice settled on the salty lake and formed huge glaciers, which cut the lake off from the rest of Antarctica and kept it 400 metres underground. Over time, the subglacial lake became even saltier - three times saltier than seawater, in fact - which means it was impossible to freeze.

Cut off from its physical surroundings, the incredibly salty water that feeds Antarctic’s Blood Falls has not once been exposed to sunlight in several million years and is completely devoid of oxygen. "It's also extremely rich in iron, which was churned into the water by glaciers scraping the bedrock below the lake," says Natasha Geiling at Smithsonian Magazine. "When water from the subglacial lake seeps through a fissure in the glacier, the salty water cascades down the Taylor Glacier into Lake Bonney below. When the iron-rich water comes into contact with the air, it rusts - depositing blood red stains on the ice as it falls."

Not only is the blood-red, super-salty water severely lacking in oxygen and any exposure to light, it also happens to be home to some extremely odd wildlife. When the lake was forming million of years ago, tiny microbes moved in, and found themselves trapped when the glaciers grew and set on top. The microbes have been thriving in the lake ever since, sourcing the energy they need by breaking down sulphates - naturally occurring substances that contain sulphur and oxygen.

"After that, something eerily magical happens with the by-products,” says Geiling at Smithsonian Magazine, "the iron in the water interacts with them to restore the sulphates, basically recycling the sulphates for the microbes to break down into oxygen over and over again."