1,500-Year-Old Lovers Uncovered in China, Locked in an Eternal Embrace

The skeletal remains of two lovers, buried together more than 1,500 years ago in northern China, were recently discovered locked in an eternal embrace, a new study finds.

It's possible that the woman, who wore a metal ring on her left ring finger, sacrificed herself so that she could be buried with her husband, the researchers said.

While joint male-female burials are not uncommon in China, this entwined burial "with two skeletons locked in an embrace with a bold display of love" is the first of its kind in the country, and may reflect changing attitudes toward love in Chinese society at that time, the researchers wrote in the study.

"This is the first [couple] found in a loving embrace, as such, anywhere anytime in China," study lead researcher Qian Wang, an associate professor in the Department of Biomedical Sciences at the Texas A&M College of Dentistry, told Live Science in an email.

Archaeologists discovered the burial in June 2020 during the excavation of a cemetery that had been exposed during construction work in Shanxi province. The cemetery contained about 600 burials from the Xianbei, an ancient nomadic group in northern China that assimilated into Han Chinese culture, and dated to the North Wei Dynasty (386-534 CE), the grave shapes and ceramic goods found in the cemetery revealed. 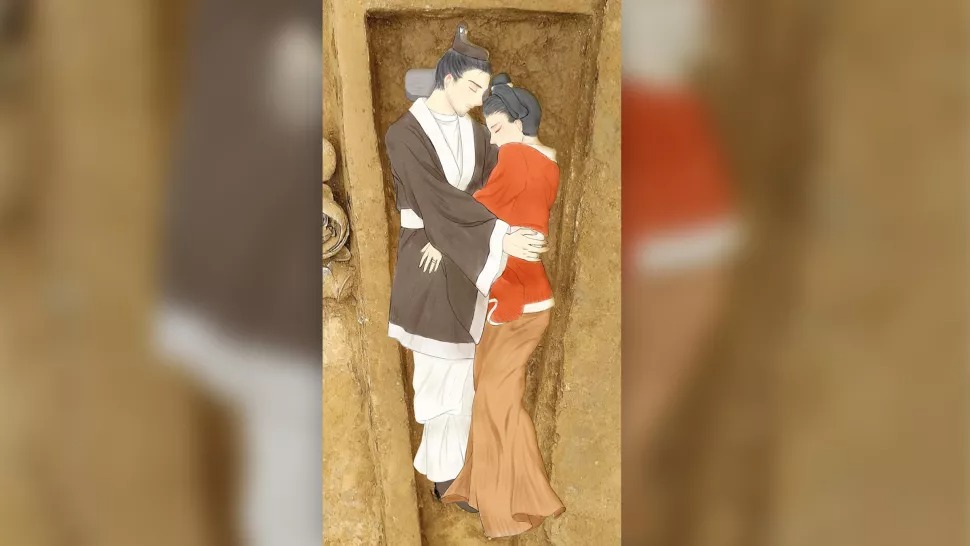 Illustration of the lovers overlaid on a photo of the burial site. (Anqi Wang; Qiang Wang)

Because the couple's burial was unique, the archaeologists decided not to fully excavate the skeletal remains. Instead, the team left them entwined so that the duo could be put on display in a future museum exhibit.

The archaeologists found two other couples buried together in the same cemetery; but these couples were not hugging as closely, and the females were not wearing rings, Wang said.

The ringed lovers' partial excavation still revealed plenty about them. The man would have stood about 5 feet, 4 inches (161.5 centimeters) tall and had a few injuries, including a broken arm, part of a missing finger on his right hand and bone spurs on his right leg. He likely died between the ages of 29 and 35, the researchers said.

The woman, in contrast, was fairly healthy when she died. She stood about 5 feet, 2 inch (157.1 cm) tall and only had a few dental problems, including cavities. She likely died between the ages of 35 and 40.

It's possible that the woman wore the ring on her ring finger due to influence "by the customs from the western regions and beyond through the Silk Roads … and assimilation of the Xianbei people, reflecting the integration of Chinese and Western culture," Wang said.

Whoever buried the couple did so with tender care. The man's body was curved toward the woman's, and his left arm lay beneath her body. His right arm embraced her, with his hand resting on her waist. The woman's body was placed "in a position to be embraced," the researchers wrote in the study. Her head faced slightly downward, meaning her face would have rested on his shoulder. Her arms hugged his body. 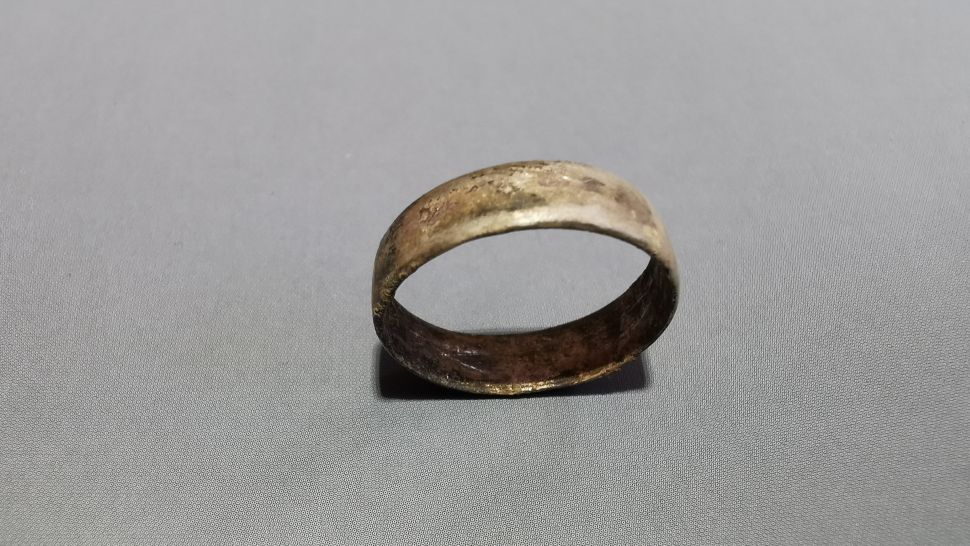 It's likely this scene reflected the couple's dedication to each other in life. "The [burial] message was clear — husband and wife lied together, embracing each other for eternal love during the afterlife," the researchers wrote in the study.

The team had a few ideas about how the couple ended up in the same grave. It's unlikely the lovers died at the same time from violence, disease or poisoning, as there is no evidence yet of any of these things. Perhaps the husband died first and the woman sacrificed herself so that they could be buried together, the researchers said.

It's also possible that the woman died first and the husband sacrificed himself; however, this is less likely, as the woman appears to have been in better health than her partner.

During the first millennium, when this couple was alive, the ability to freely express and pursue love in China became culturally "prominent", the researchers said. There were fictional love stories galore and even historical records of people taking their own lives for love. In essence, pursuing love and dying by suicide for love was "accepted, if not promoted," Wang said.

While the circumstances that led to these lovebirds' intimate entombment remains a mystery, their burial is a "unique display of human emotion of love in a burial, offering a rare glimpse towards love, life, death, and afterlife," Wang said.

The study was published online June 4 in the International Journal of Osteoarchaeology.

In photos: 1,500-year-old tomb of a Chinese woman named Farong