10 Delightful Animals You May Not Have Known Were Necrophiliacs

Ah, nature. So majestic. So serene. So … disturbing. It turns out that there's a lot of grotesquery in the animal kingdom, and it goes far beyond snacking on the occasional dead young.

Many more animals than you would think have been spotted trying to get their rocks off with the dead.

In some cases, it's almost understandable. In some cases, it even actually works, resulting in a successful mating. But in many other instances, it's simple deeply disturbing… especially when it's something cute, furry, and otherwise seems like a paragon of sweetness.

Only if you think you can handle getting your animal-loving heart broken should you read on. And just a warning that there are some pictures.

Oh no, say it ain't so! Not our beloved corvids! Alas, readers, it is true. Occasionally, crows like to have a bit of a go with their dead friends. And not only - researchers also recently observed the birds trying to have sex with dead pigeons.

Curiously, they never do so without aggression, and they primarily do so within the breeding season. Although the reason for the behaviour is unknown, the researchers believe it might have something to do with a dead crow having conflicting characteristics - it could be food, it could be an intruder, or it could be a mate.

Here's a fun video (we're lying, it's really not).

A minority of crows, researchers hypothesised in a new paper, simply may not be able to process these conflicting stimuli in their brains, and end up choosing a mix of inappropriate responses.

You, uh… do you, little buddies.

Australia's cute-n-cuddly coat-of-arms critter, the kangaroo, isn't necessarily all that cute when it wants to get cuddly. In 2016, a male 'roo stole the nation's heart when a photo of him seemingly "grieving" over his dead mate went viral.

There was just one problem.

"Great photos of the kangaroos, but I think they are fundamentally misinterpreted. The male is clearly highly stressed and agitated, his forearms are very wet from him licking himself to cool down. He is also sexually aroused: the evidence is here sticking out from behind the scrotum (yes, in marsupials the penis is located behind the scrotum)," explained Mark Eldridge of the Australian Museum.

"This is a male trying to get a female to stand up so he can mate with her."

Ducks are adorable, but their sex lives are a horror show. And it doesn't get much worse than an incident observed by Dutch biologist Kees Moeliker of the Natural History Museum Rotterdam.

One day he heard a loud bang against one of the museum's windows. When he looked outside, he saw a dead male duck. And then a live male duck nearby. And then the live duck went over to the dead duck, and proceeded to try to get busy.

For 75 minutes. After which he began to grow bored, so he went and collected the dead duck and froze it for later study.

"I knew I'd seen something special, but it took me six years to decide to publish it," he said in a TED talk. "After six years, my friends and colleagues urged me to publish, so I published 'The first case of homosexual necrophilia in the mallard'."

That paper won Moeliker the 2003 Ig Nobel Prize in Biology. 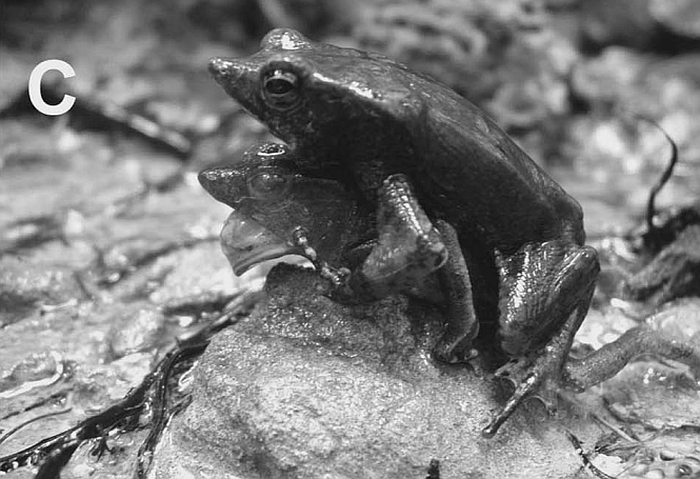 Everyone loves frogs, with their tiny little frog hands, and their big frog eyes, and their clammy little frog bellies. And, look, frogs are cold-blooded, so it stands to reason that frog on the prowl might not immediately recognise the difference between alive-cold and dead-cold.

But there's a little Brazilian toad that can go necrophilia one better. The male Rhinella proboscidea is able to extract eggs from the body of a dead female and successfully fertilise them.

He climbs on top and squeezes her belly to pop the eggs out, then fertilises them - and then they grow into more toads. The scientists who discovered it called it "functional necrophilia," and described it in a 2012 paper.

It's never been observed in another species. Which, uh, we're not really all that sad about.

When this behaviour was first observed, it so shocked biologist George Murray Levick, a member of the 1910-13 Scott Antarctic Expedition, that he had it stricken from the official record. It was kept secret for nearly 100 years.

"What is happening there is not in any way analogous to necrophilia in the human context. It is the males seeing the positioning that is causing them to have a sexual reaction," ornithologist Douglas Russell of the London Natural History Museum told the BBC in 2012.

"They are not distinguishing between live females who are awaiting congress in the colony, and dead penguins from the previous year which just happen to be in the same position."

The New Zealand, or Hooker's, sea lion, is a majestic creature, with the most loveable little cubs. And also perhaps a taste for cross-species necrophilia?

"An adult male sea lion was observed attempting to copulate with a dead female fur seal on Bunkers Islets on 24 January 1973. When first observed they were lying in bodily contact. The sea lion sat up momentarily and gently nudged the fur seal several times. A few minutes later he mounted the fur seal and made several pelvic thrusts, at the same time gently nudging her head and neck with his mouth and biting her neck."

"After about 10 min he became disturbed by my presence, picked up the fur seal by the back of the neck, and entered the water. He swam slowly out to sea holding the fur seal under water," the paper reads.

"The fur seal had possibly been killed during an earlier attempt at copulation."

Once you know these things, you can never un-know them. 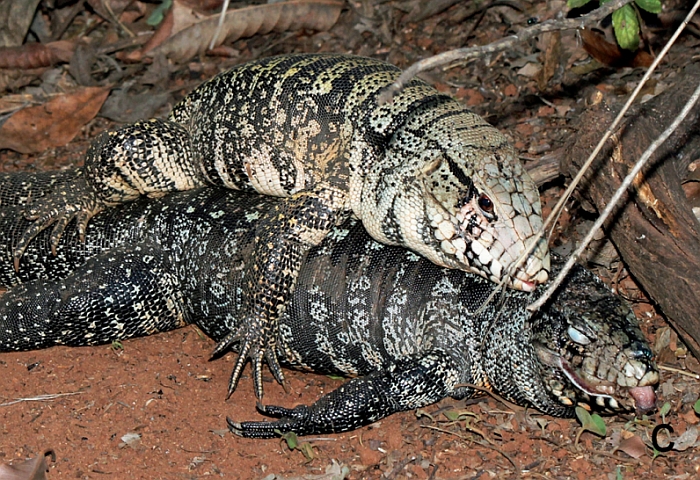 Several species of lizard are known to court dead females, but one particular case stands out: the Brazilian tegu lizard. Herpetologist Ivan Sazima observed not one, but two different male lizards attempting to copulate with the dead body of a female.

The first, when the body was still fresh, only tried for about five minutes before a flock of geese turned up and scared him off.

By the following afternoon, the body had bloated and begun to stink. But that didn't stop a second, smaller male from giving it a red-hot go. Sazima arrived while he was already in the act, and he continued for about an hour before finally giving up.

Sazima noted that female tegu lizards are usually still and compliant during mating, and that sex pheromones on her body may have been more powerful than the smell of putrefaction.

"Whatever the cause," he wrote in a paper, "this seems the first record of a dead lizard female that attracted different males for two consecutive days."

This one is actually really sad. Common marmosets, a type of monkey native to Brazil, form monogamous pair-bonds.

Scientists were able to observe a particular incident, when the female of such a pair bond that had been together for several years fell out of a tree and died. The male was absolutely beside himself.

He "engaged in a number of behaviors, including embracing her, sniffing at her, chasing other monkeys away, sitting by her, and trying to copulate with her," wrote Michael Balter for Science Magazine. "He also emitted alarm calls normally used when a predator is near."

Some of these behaviours - such as the attempt to copulate - may have been stress-related, rather than compassionate. But he also may have been aroused by her laying on the ground.

Given, however, that after a few months he left the marmoset troop never to be seen again, it seems that there was at least some grief involved in his reaction.

"But," you're saying now, "Sea otters are great! They hold hands! They stack cups!"

Both of those things are true, friends, but they also have a much darker side that is too terrible for videos.

In a 2010 paper, veterinarian Heather Harris and her team documented some truly disturbing behaviour. They reported 19 cases of sea otters engaging in what they called "interspecific sexual behaviour."

"At least three different male sea otters were observed harassing, dragging, guarding, and copulating with harbor seals for up to 7 days postmortem."

Some of the carcasses were retrieved for autopsy, and there were some deeply unpleasant injuries involved.

But that's not all. The paper also notes:

"In one prior report on breeding-associated mortality, a tagged territorial male sea otter held a struggling female underwater until her body became limp and then copulated repeatedly with her carcass. Ten months later, this same male was observed with the carcass of another female sea otter. In both cases, the male was swimming, diving, guarding, and copulating with the carcass."

We need some brain bleach.

You didn't think sea otters were the only sea bastards, did you? Oh no. Far from it. Anyone who knows anything about dolphins won't be surprised by this, though.

In May 2000, two male dolphins were observed over the course of two days guarding and investigating the carcass of a female. Attempts to retrieve the carcass were met with aggression, and the males took turns going to the surface to breathe.

When the carcass was flipped belly-up by the ocean currents, the males were observed initiating belly-to-belly contact - the copulation position. And, when they got within half a metre of the carcass, they were observed to be sporting erections. They also nosed at the carcass's genital area and chest.

The scientists documenting the encounter, as is right and proper, refrained from drawing conclusions, noting only that a "sexual factor" could not be discounted.

But now that image exists, in our heads, for all time.