This 8,000-Year-Old Rock Art Is The Earliest Depiction of Domesticated Dogs

Dogs have been our best friends for a very long time, and now we have the earliest ever pictorial evidence of that bond.

Prehistoric rock art found in Saudi Arabia shows humans hunting with dogs on leashes - and it looks like those pictures could be at least 8,000 years old, making them the earliest art depicting dogs.

If the dating turns out to be accurate, it would also beat Iranian pottery painted with dogs from just under 8,000 years ago.

We have evidence of dog domestication that stretches back for millennia. Fossils that are over 30,000 years old show a breed of canid that differed from wolves, more closely resembling dogs.

The earliest strong evidence for domestication to date is the remains of a dog found buried with two humans, dating back 14,700 years, in Germany.

Fossil records are one thing, but there is a lot they can't tell us - such as how humans interacted with their canine companions.

This is where the rock paintings come in, found at two sites in Saudi Arabia, Shuwaymis and Jubbah. Max Planck Institute for the Science of Human History archaeologist Maria Guagnin has been helping catalogue over 1,400 rock art panels from the two sites, between them depicting over 7,000 humans and animals.

In among the cattle and often obscured by later pastoral carvings, Guagnin discovered at least 349 dogs - 156 in Shuwaymis and 193 in Jubbah.

A human and a pack of dogs hunting an equid and its young. (Guagnin et al., J. Anthropol. Archaeol, 2017)

"When Maria came to me with the rock art photos and asked me if they meant anything, I about lost my mind," co-author Angela Perri, a zooarchaeologist at the Max Planck Institute for Evolutionary Anthropology, told Science.

"A million bones won't tell me what these images are telling me. It's the closest thing you're going to get to a YouTube video."

Around 10,000 years ago, the two regions were much more hospitable, and humans began to settle there, perhaps after leaving them for a period during which they were too arid to be habitable.

However, transitioning from hunting-based subsistence to farming and raising cattle wouldn't occur until sometime between 6800 BC and 6200 BC - around 7,000 to 8,000 years ago, based on bones found in the region.

The carvings of dogs probably appeared prior to this time - based on the later pastoral carvings and the weathering of the rock.

During the interval of hunting for subsistence, it seems the human settlers hunted with their dogs. The dogs are shown with lines carved connecting them to the hunters - which could be either leashes, or a metaphor for the bond between man and beast.

The dogs are also depicted assisting in the hunt. Three dogs are shown biting the necks and the belly of ibex, as well as the necks of gazelles. Another scene shows dogs surrounding an equid and its young, setting on the younger animal and biting its neck.

Meanwhile, the accompanying humans are shown bearing weapons that look like bows and spears. 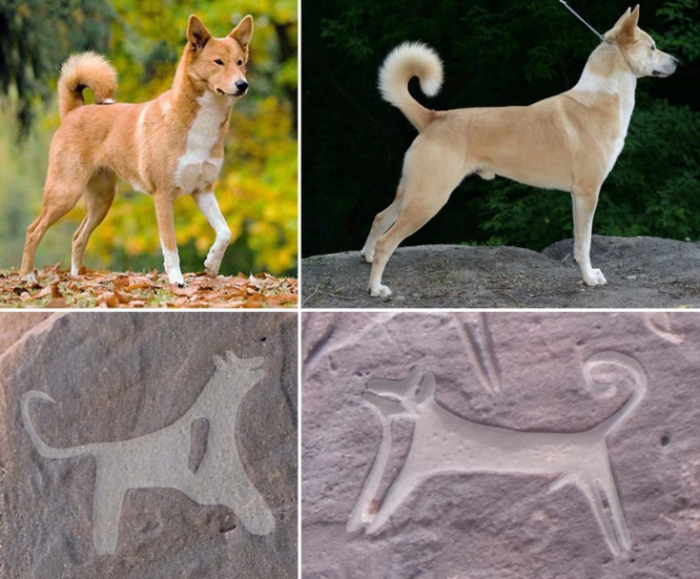 The dogs are curly-tailed, medium-sized, with pricked ears, short snouts and a deeply angled chest. They resemble, the researchers said, the modern Canaan breed of dog.

These mostly feral dogs are a basal breed, and have lived in the Middle East for thousands of years, although it is unknown whether they originated there or elsewhere.

What's even more awesome is that all of the dogs have individual traits. Some are drawn with spots on their coats, or white patches on the head or chest. Some are clearly male, and all have different tail positions, stances, and coat colourations.

The carvings tell us a lot about how the humans controlled and hunted with their dogs, as well as about the dogs themselves - their coats and behaviour. Now, they say, more research will be required to search the area for domestic dog remains from the time period.

The research has been published in the Journal of Anthropological Archaeology.