It's well established that diabetes wreaks havoc on people's blood sugar levels, but one thing we don't usually think about is the amount of waste produced by all those blood tests that need to be taken daily when you have the disease.

Now 11-year-old William Grame from Canberra in Australia has 3D printed a device that hygienically stores all those old blood test strips, and it's small enough to fit inside a diabetic's portable test kit. His invention has won the years 5 to 6 category of the Origin Energy littleBIGidea competition, and he'll be heading off to the US to visit NASA as part of his prize.

Grame, who has type 1 diabetes, was inspired to create the device after constantly getting in trouble for leaving his test strips on the floor at home. "There are around 380 million diabetics in the world, each testing their blood at least a few times a day," said Grame at a presentation of his device this morning in Sydney.

He's tested his device over the past few months and showed that it can securely store around 50 test strips, which means he only has to empty the device into the bin once a week. In the meantime, it keeps his blood-stained strips off the floor, and makes his life, and his family's, a little easier. 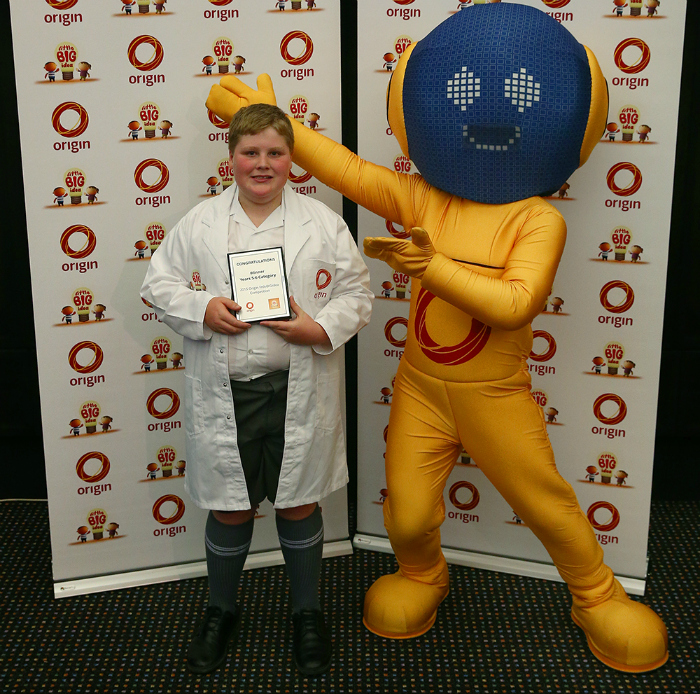 He created the blueprint for the blood disposal test strip disposal unit while on a 3D printing camp earlier in the year, and the judges said that the invention would be easy to immediately enter commercial production.

But although he hopes the device will ease the burden of daily testing for people around the world, he eventually hopes that people won't need it. "My dream is for someone to find a cure for diabetes, so no one will have to use my invention," he said.

Other winners were 10-year-old Greta Cummins, in the years 3 to 4 category, who came up with the idea of an AirBag Alarm that automatically alerts authorities after an AirBag has been deployed to help people in accidents on rural and remote roads get faster attention. If the people inside the car are uninjured, they have a minute to turn off the alarm, before it sends their GPS coordinates to police and ambulance services.

Thirteen-year-old Oscar Mason won the years 7 to 8 category for coming up with an alarm system that's activated by pressure plates in a child seat, and stops babies from dying in hot cars. When the pressure plates are activated, it closes the circuit and activates the system, and a sensor then detects when the ambient temperature in the car gets over 40 degrees Celsius, and starts honking the car horn and flashing the lights in order to attract attention. The air conditioning is also automatically switched on, to cool the car down and prevent heat stroke.

Other entries included a litmus test designed to detect trace amounts of nuts and other allergens in foods, and a robotic 'sock'-like exoskeleton, that would allow people suffering from neurodegenerative conditions to hug their loved ones.

"It was a tough job judging so many creative entries from students across the country," said littleBIGidea competition ambassador and judge James O'Loghlin, former host of The New Inventors. "The AirBag Alarm, Blood Strip Disposal Unit, and Baby Buddy are all winning ideas, because not only are they original and creative, but they're also practical and innovative."

The Origin Energy littleBIGidea competition aims to inspire the next generation of big thinkers to develop ideas that could one day be put into production and help a lot of lives and, going on the entries, the future is in pretty safe hands. We can't wait to see someone take these ideas and run with them.