A pair of 214 million-year-old skulls are thought to belong to the first distinct dinosaur species identified in what is now Greenland, researchers say.

Given the name Issi saaneq (or "cold bone" in Greenlandic Inuit), the dino is believed to have been a long-necked, plant-eating sauropodomorph. It's been reconstructed from two skulls discovered back in 1994, which were originally thought to belong to Plateosaurus.

After a closer analysis of the skulls – one a juvenile, the other a late-stage juvenile or sub-adult – and a comparison with other more recent fossil findings, researchers have now decided that this is a species all of its own, an extra branch to add to the Late Triassic dinosaur family tree.

"The anatomy of the two skulls is unique in many respects, for example in the shape and proportions of the bones," says paleontologist Victor Beccari, from NOVA University Lisbon in Portugal. "These specimens certainly belong to a new species."

Using a type of X-ray technique known as a Micro-Computed Tomography (micro-CT) scan, researchers were able to build 3D models of the skulls and pick out key differences from the Plateosaurus – including variations in the placement and shape of the jaw.

While we don't know for sure how large Issi saaneq might have been, if the species was like other plateosaurids, it's possible it would have reached lengths of 3-10 meters (up to almost 33 feet), a similar size to Plateosaurus, as well as the Macrocollum and the Unaysaurus: two related species found in modern-day Brazil, which are almost 15 million years older.

When Issi saaneq was alive, the supercontinent Pangaea would have been starting to break apart, forming the Atlantic Ocean in the process. It's this shifting geography that means we now have dinosaur fossils spread out all across the world.

"At the time, the Earth was experiencing climate changes that enabled the first plant-eating dinosaurs to reach Europe and beyond," says sedimentologist Lars Clemmensen from the University of Copenhagen in Denmark. 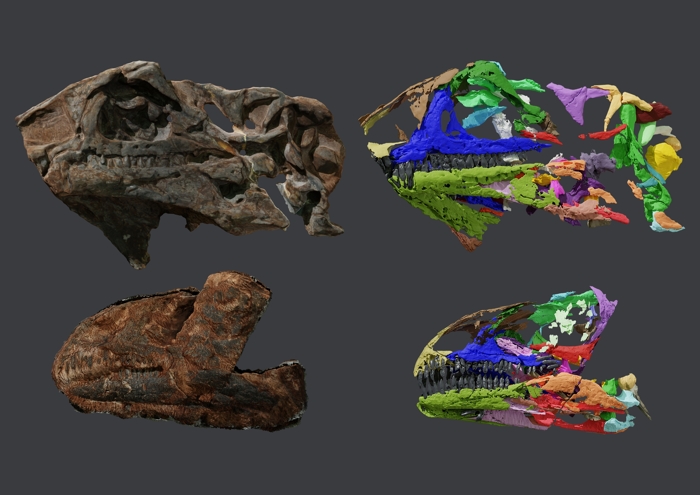 Something else that is of particular interest about this discovery is that the sauropodomorphs were the predecessors to the sauropods, the largest animals to ever walk on the face of the Earth – so this is quite a key piece of the evolutionary jigsaw.

While there's plenty of evidence for the Plateosaurus living in what is now Germany, France, and Switzerland, only a few dinosaurs from this species have been dug up and documented in modern-day Greenland.

Now there's evidence of a distinct Greenlandic dinosaur species all of its own. We can add it to the growing list of new dinosaur species that are being discovered and documented with each passing year.

"It is exciting to discover a close relative of the well-known Plateosaurus, more than one hundred of which have already been found here in Germany," says paleontologist Oliver Wings from the Martin Luther University of Halle-Wittenberg (MLU).

The research has been published in Diversity.