29 New Wasps Have Been Found, And Their Life Cycle Is The Stuff of Nightmares

Scientists have recently discovered and described 29 cool new species of wasp, and their life-cycle is enough to give you nightmares for weeks.

Here's how it goes. Parasitoid wasps lay their eggs in other animals so that their larvae will have something to snack on when they hatch. Oftentimes, this means that the 'hosts' are still alive while their insides are being eaten.

As the larvae grow larger, the hosts - usually other insects or spiders - shrink smaller. Then, when the larvae have had their fill and are ready to move on into adulthood, they suck everything else out and throw away the dead husk.

As such, these wasps are a cross between a parasite and a slow-killing predator, also known as a 'parasitoid'. 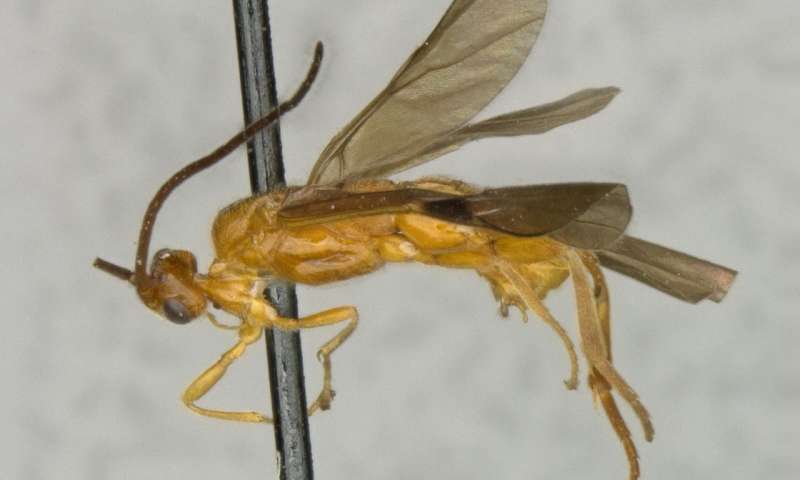 The 29 new parasitoid wasps include species from every tropical region in the world, from Australia to Africa to Asia. The scale of the discovery is impressive, but the best part about the whole thing is what the scientists decided to name the new additions.

Sometimes, when you are really lucky, being a scientist means that you can memorialise the things you love, and the study's lead author Jose Fernandez-Triana is apparently making use of this opportunity at every turn.

One species, for instance, was named Qrocodiledundee outbackense in a hat tip to Australia's remote interior (where the species was found) and one of Fernandez-Triana's favourite films.

The report even mentions that he was "at one point even nicknamed [Crocodile Dundee] because, as with the main character of the movie, he also caught crocodiles and was bitten by one."

Another of the new species was named Tobleronius orientalis, mostly because the discoverer had the Swiss chocolate bar on his mind.

"The shape of T2 looks like one of the triangles that compose Toblerone bars (if one has enough imagination and love for chocolate!)," the report reads. "Here is hoping that someday a wasp-shaped chocolate bar is produced."

You can maybe, kind of, see what they are talking about in the picture below. Either that, or you just don't love Toblerones enough. It's science.

The rest of the 27 species were given more generic names, even though parasitoid wasps are anything but ordinary. In fact, scientists think they could very well be the most diverse animal group in the world, with more species than any other on Earth.

In part, this is due to the fact that parasitoid wasps target just one type of host, a specialisation ripe for biodiversity.

But as you can imagine, finding and describing such a megadiverse group is quite the endeavour. Even now, after adding 29 new species, scientists have only uncovered the tip of the iceberg.

They estimate we still have 85 to 95 percent of the world's parasitoid wasps left to find.

"If you stop and think about the sheer number of animals on Earth that make a living by laying eggs in other animals and doing all sorts of horrible things to them before consuming them alive, it can give one pause," Andrew Forbes of the University of Iowa told the BBC in 2015.

The study has been published in Journal of Hymenoptera Research.