Depression can be a frighteningly relentless condition. Luckily, researchers around the world are constantly working on new treatment options, such as a newly designed brain implant for resistant depression.

Altogether, up to a third of people with depression don't respond or become resistant to treatment. No medication or therapy type seems to help. For those with such treatment-resistant depression, the future can look especially bleak.

This is what happened to Sarah, a 36-year-old woman who's had severe and treatment-resistant depression since she was a child. But a new proof-of-concept intervention has provided significant relief for Sarah, and could offer hope for many like her. The only catch? It requires a custom-designed 'brain pacemaker' for each person.

"I was at the end of the line," said Sarah, who asked to be identified by just her first name.

"I was severely depressed. I could not see myself continuing if this was all I'd be able to do, if I could never move beyond this. It was not a life worth living."

Luckily, Sarah was able to participate in a case study with a neuroscience research team at University of California, San Francisco (UCSF); the team's project was to investigate deep brain stimulation methods that could potentially alleviate depression symptoms.

Although the idea of having a small device implanted in our skulls might sound terrifying to some, deep brain stimulation has had a successful past in other brain disorders such as Parkinson's disease and epilepsy.

But depression is significantly more complicated than either of those diseases. So far, results on deep brain stimulation for depression that targets particular regions of the brain – such as Brodmann area 25 – have been mixed, and mostly underwhelming.

However, the UCSF team has made a significant change to this type of therapy.

Instead of applying the same brain stimulation treatment for everyone, the researchers manually tracked where Sarah's depression was appearing in the brain. They identified a biomarker – in this case, a specific pattern of brainwaves – which has not been identified in major depressive disorder before, and used it to personalize the machine to only stimulate when and where the biomarker was expressed.

The team put one electrode lead into the brain area where the biomarker was found, and a second where Sarah's 'depression circuit' was. The best location for symptom relief took some time to figure out; once it was inserted, the first lead would detect the biomarker, and the second lead would produce a tiny amount of electricity for six seconds deep in the brain region. 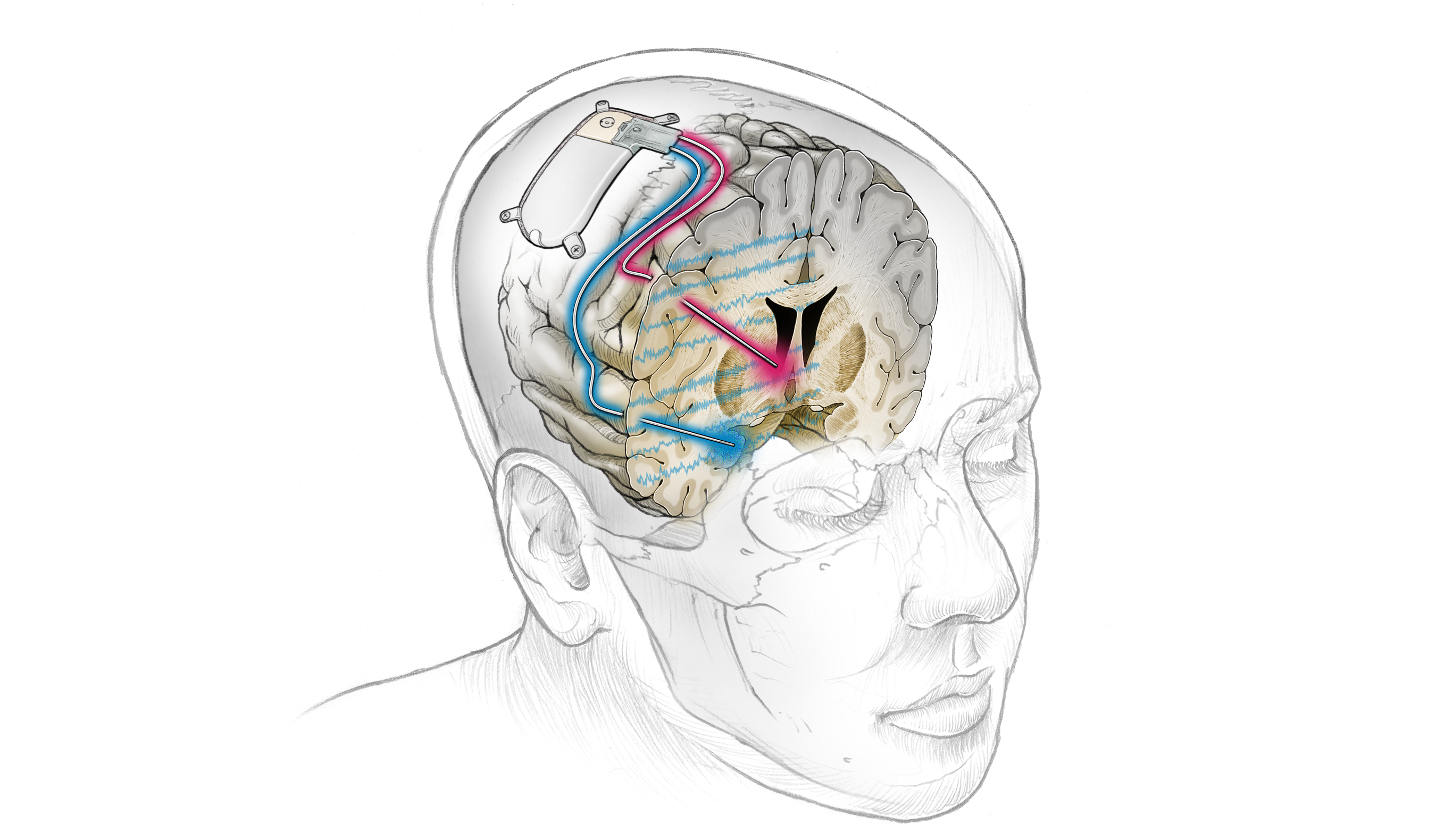 Above: The device with one lead (blue) in the amygdala to detect the biomarker, and the other (red) in the ventral capsule for stimulation.

"The effectiveness of this therapy showed that not only did we identify the correct brain circuit and biomarker, but we were able to replicate it at an entirely different, later phase in the trial using the implanted device," said first author, UCSF psychiatrist Katherine Scangos.

"This success in itself is an incredible advancement in our knowledge of the brain function that underlies mental illness."

Now, we really need to stress that this new, successful result has only been achieved in one patient so far. There have been plenty of other studies looking into deep brain stimulation that didn't come to fruition in trials, nor do we know yet how this approach will fare over time.

But for Sarah the changes have been immense.

"In the early few months, the lessening of the depression was so abrupt, and I wasn't sure if it would last," she said.

"But it has lasted. And I've come to realize that the device really augments the therapy and self-care I've learned." Excitingly, only stimulating the brain once the symptoms – or in this case the biomarker – arise is also a new way of using deep brain stimulation in depression. In past studies, the stimulation was done continuously at pre-set intervals, and not when specific depressive brain activity arises. This in itself could be a huge change to making the technique more successful.

But this biomarker is very likely not universal, which means that the researchers will need to find every patient's individual version of Sarah's biomarker to be able to treat them in the same way.

The team is already enrolling more patients into the study to see if they can find more personalized depressive markers and provide them with their own specialized 'brain pacemaker'.

"We need to look at how these circuits vary across patients and repeat this work multiple times. And we need to see whether an individual's biomarker or brain circuit changes over time as the treatment continues," said Scangos.

This is the very start of a treatment design, and there will be plenty of challenges to go before this is a potential option for patients outside of the research setting. But for those with treatment-resistant depression, this personalized treatment could one day be an exciting way forward.

"We've developed a precision-medicine approach that has successfully managed our patient's treatment-resistant depression by identifying and modulating the circuit in her brain that's uniquely associated with her symptoms," said one of the UCSF team, psychiatry researcher Andrew Krystal.

"This study points the way to a new paradigm that is desperately needed in psychiatry."

The research has been published in Nature Medicine.