A 17th Century Bishop Was Mysteriously Buried With a Fetus. We Finally Know Why

The small, sad bundle, squeezed into the lining of the coffin. (Gunnar Menander)

Bishop of Lund Peder Pedersen Winstrup, of the Churches of Sweden and Denmark, died in 1679. An important and well-respected man, his body was mummified and laid to rest in a family vault in Lund Cathedral. Apart from the exceptional preservation of his remains, nothing seemed unusual about his death or burial.

In 2012, when a decision was made to move Winstrup's coffin, scientists leapt at the chance to study his remains. That's when they found it - the tiny corpse of a fetus, stillborn at no more than five or six months gestation, tucked carefully behind and between the bishop's calves.

Finding a fetus or babe with the remains of a woman, usually presumed to be the mother, is not unusual in archaeology. Records show that the remains of children were also entombed at Lund Cathedral - sometimes even unrelated to the other bodies with whom they were placed, since the tomb was sometimes used as an interim storage for remains.

But placed in the coffin of a bishop? An important bishop who died at the respectable age of 74 years? And not just placed, but hidden in the lining of the coffin, as though hastily and secretly stowed? This was a puzzle archaeologists had to solve.

"It was not uncommon for small children to be placed in coffins with adults. The fetus may have been placed in the coffin after the funeral, when it was in a vaulted tomb in Lund Cathedral and therefore accessible," said archaeologist Torbjörn Ahlström of Lund University in Sweden.

"Placing a coffin in a vault is one thing, but placing the fetus in the bishop's coffin is quite another. It made us wonder if there was any relationship between the child and the bishop." 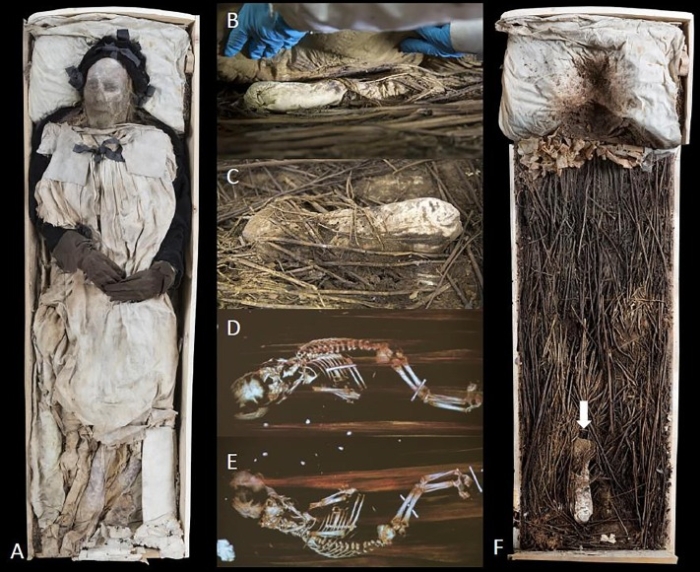 Winstrup and the placement of the fetus in his coffin. (Krzewinska et al., J. Archaeol. Sci. Rep., 2021)

The team took samples from both sets of remains, and conducted full genetic sequences of the extracted DNA.

There, the answer lay. Roughly 25 percent of their genes matched. This indicates a secondary relationship between the two, like that between an uncle and nephew, half-siblings, double cousins - or, much more likely given the relative ages of the remains, a grandparent and grandchild.

This suggests that the father of the child was Winstrup's son. From the bishop's first marriage, he had one son who survived to adulthood, also named Peder Pedersen Winstrup.

According to historical records, the younger Winstrup studied fortification - rather than theology - when he attended Leiden University in the Netherlands as a young man. He was married no later than 1679 to a young noblewoman named Dorothea Sparre, who brought with her Södertou, the estate of her late father.

In 1680, under the Great Reduction, in which the Swedish crown reclaimed lands gifted to the aristocracy, Winstrup the younger lost his estates, including Winstrup the elder's estate Lundagård. He spent the rest of his life destitute, never fathering a son; the male lineage died with him sometime in the early 18th century.

The fetus, therefore, seems to be a piece of the man's sad story - perhaps placed in his father's coffin as a symbolic act, the researchers said - the last male Winstrup heir interred with his grandfather.

"With the results from the [ancient DNA] analysis at hand and the genealogy, the only person able to provide a second-degree relative to Peder Winstrup through paternal lineage was his son, Peder. The fetus of a boy placed in the coffin could thus be the grandson of the bishop," the researchers wrote in their paper.

"It seems probable that the relatives would have had access to the crypt where the coffins of the Winstrup's were stored and, thus, a possibility to deposit the fetus in one of the coffins, in this case that of Peder Winstrup."

It's possible someone wanted to ensure that the child who'd missed out on experiencing life was at least with family in death.

The team's research has been published in the Journal of Archaeological Science: Reports.