A nearly 40-million-year-old skeleton belonging to what is popularly called a sabre-toothed tiger is going under the hammer next week in Geneva, a year after its discovery on a US ranch.

"This fossil is exceptional, above all for its conservation: it's 37 million years old, and it's 90-percent complete," Bernard Piguet, director of the Piguet auction house, told AFP on Tuesday.

"The few missing bones were remade with a 3D printer," he added, with the skeleton reconstructed around a black metal frame.

Piguet said he was fascinated by the merger of "the extremely old with modern technologies".

The original bones are those of a Hoplophoneus. Not strictly a true member of the cat family, they are an extinct genus of the Nimravidae family and stalked around North America. 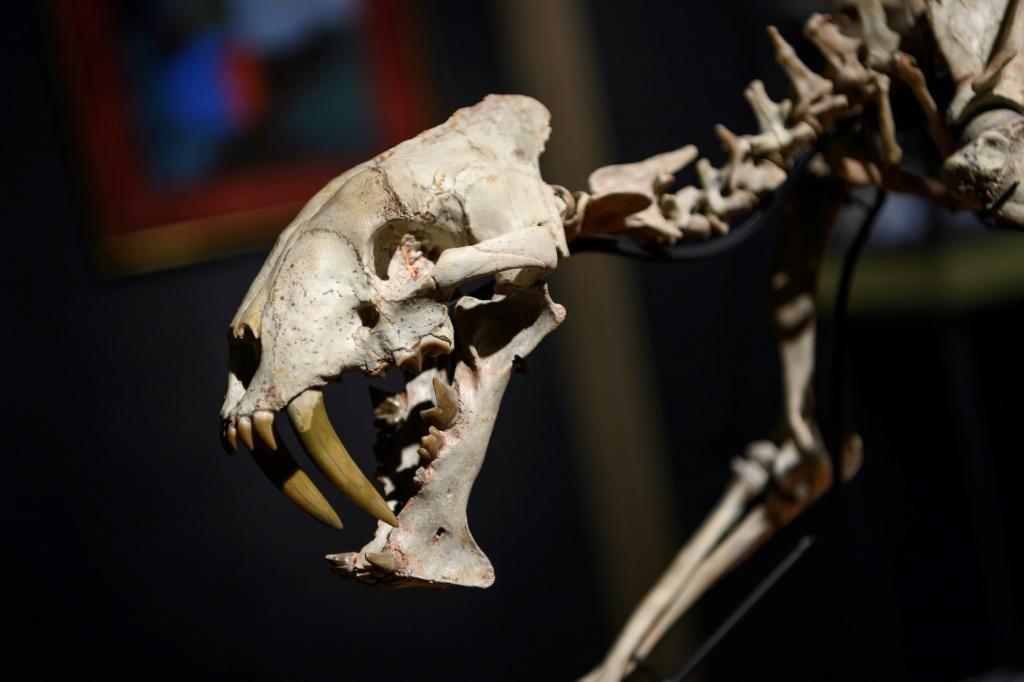 "It was found in South Dakota during the last excavation season, towards the end of summer 2019," Swiss collector Yann Cuenin, who owns the dozens of palaeontology lots on auction, told AFP.

"As in most finds, erosion had unearthed part of the skeleton. While walking around his property, the ranch owner saw bones sticking out of the ground."

While the skeleton is the star of the show, there are plenty of other treasures from the past up for grabs, including ammolite, an opal-like organic gemstone, in shades of red and orange.

Measuring 40 cm long by 36 cm wide, the fossil from the Cretaceous period is 75 million years old and hails from the Canadian Rocky Mountains. It is estimated to fetch between 20,000 and 30,000 Swiss francs.

Jurassic Park enthusiasts can also buy a Tyrannosaurus rex tooth (2,200 to 2,800 francs), or, for 5,000 to 7,000 francs, an impressive 85-cm long fin from a mosasaur - a marine reptile that in the Cretaceous period was at the top of the submarine food chain.

Though dinosaur-mania began in the United States, it has grown in Europe in recent years. Next week's sale is the second time such an auction has been held in Switzerland.

In September 2019, the skeleton of a dinosaur (Thescelosaurus neglectus), 66 million years old and three metres long, was purchased by a Swiss-resident collector for 225,000 francs.

Debate rages as to the balance between the scientific value of such items and their worth on the open market.

Some palaeontologists insist animal or plant fossils are not decorative objects for collectors, but witness to the evolution of life on Earth and therefore scientific objects that ought to be studied and then shared with the public in museums.

But Cuenin said: "If we're talking about the sabre-toothed tiger, for example, it's not a skeleton which is of major scientific interest, in the sense that it's something which is already known to science.

"We've found several dozen of them, individuals from the same species. A fossil is not just a simple scientific or technical object; it also has an artistic value," he said.

"I am all for museums, but I am also in favour of objects living among us; for there to be collectors, for pieces to be bought and sold - that's what brings culture to life."